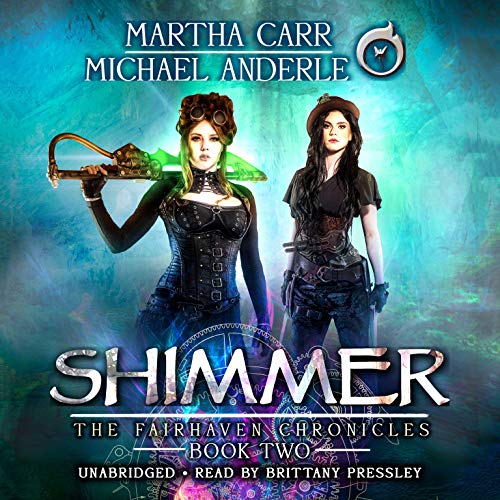 Shimmer: The Revelations of Oriceran

By: Martha Carr,Michael Anderle
Narrated by: Brittany Pressley
Try for $0.00

Oriceran is rife with secrets...and you may not want to know the answers.

Thanks to an ancient artifact, Victoria Brie is stuck with dark magic in her blood until the day she dies. And if she’s not careful, that day will come too soon.

There are those who would kill her simply for what she is: a Rhazdon host, master of incredible power. To make matters worse, the madman who murdered her parents is dead-set on slitting her throat, too.

Like hell. Victoria won’t go down without a fight.

But there’s trouble brewing in the shadows of her beloved hometown. In the alleyways and shadows of the charmingly magical Fairhaven, dangerous magic from a bygone era is resurfacing. Worse still, it only reacts to the touch of a single being: Audrey, Victoria’s best friend. It begins to twist Audrey’s mind, urging her to a faraway land the world thought was lost....

There are answers in Atlantis, clues that could give Victoria the power to finally destroy the man who killed her parents. But every step she takes toward Atlantis shines light on a world brimming with lies, murder, and deception. If Victoria isn’t careful, she’ll lose Audrey to the mystical city buried beneath an ocean.

Victoria’s used to being hunted...but no one threatens her friend and lives.

This series is an enchanting urban fantasy saga with sarcastic ogres, wise-cracking wizards, and a brutally addictive full-contact sport called Berserk. Your only regret will be not starting it sooner.

Warning! This story contains cursing because these 18-year-olds are honorable rebels. If cursing offends you, you might not like this audiobook.

What listeners say about Shimmer: The Revelations of Oriceran

Now our gals must find Atlantis!

Shimmer: The Revelations of Oriceran
The Fairhaven Chronicles, Book 2
By: S. M. Boyce, Martha Carr
Narrated by: Brittany Pressley
New developments happen and for the sake of everyone in Fairhaven, the gals must find Atlantis! Fortunately they have a wizard to help them. Unfortunately, this wizard is a big flirt and full of himself. What happens when they get there is not what they expected!
Narration is super good!

I really hoped that Audrey's character was going to be expanded and I am NOT dissatisfied. The use of the feds to allow the younger wizard to accompany Victoria and Audrey was a little thin. Hopefully this will be expanded on soon. But in general a fantastic story
Keep up the great work

I’ve been a MA fan since the start withBA and this new series by Martha Carr is amazingly vivid and well amazing as is the narration by Brittany. If you love magic elves and ogres etc this is your cup of tea. Enjoy ♿️🖖