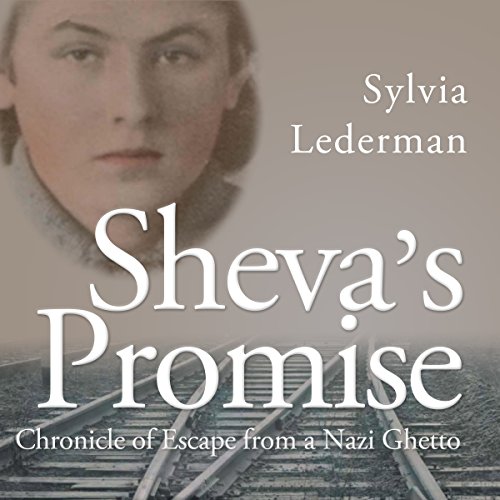 Sheva's Promise: Chronicle of Escape from a Nazi Ghetto

By: Sylvia Lederman
Narrated by: Gwen Trussler
Try for $0.00

In this gripping memoir, Lederman tells her story of survival during one of the most horrific episodes in history. Beginning with Lederman as a young girl in Poland in 1941, Sheva's Promise traces her experience in a Nazi ghetto with her mother and sister.

Resolved that she must avoid the detention camp to help her family, Lederman obtains a false birth certificate and escapes the ghetto. Through the courage and humanity of a few individuals, she finds work in a hospital in Germany under an assumed identity. Lederman's determination and resourcefulness enables her to elude Nazi capture, and she eventually immigrates to the United States with her husband.

Sheva's Promise is not only an invaluable piece of historical record but also the work of a gifted writer whose keen eye for detail and skillful attention to language gives readers an unforgettable story.

What listeners say about Sheva's Promise: Chronicle of Escape from a Nazi Ghetto

One could look at the narration two ways - that the dull, flat tones she used were a reflection of the grim realities of the story, or that she was just reading with little animation. Anyway, some people would have lost interest. Still, every survivor account that I read reminds me that this horrendous chapter in history should be remembered. Her sufferings were nothing compared to those of the people in "Country of Ash", for example, yet she still suffered the loss of everything material and all her family; and, the oppression of being despised merely for the accident of being born a Jewess.

The story was deeply moving and heartbreaking. The narration made it hard to listen to. The narrator sounded like she needed a good cough and at times whiney.

I struggled to finish. I have listened to many books on the Holocaust but this book was very hard to listen to. I finished it out of compassion not of interest. the performance was so monotone and dull that I found myself wishing the book would finish. I don't usually provide negative reviews but I would not listen again.