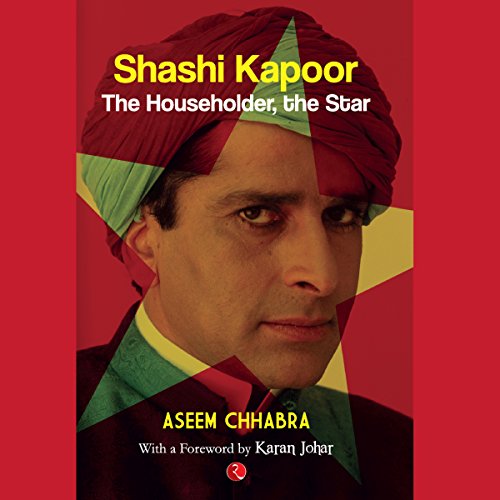 The Householder, The Star
By: Aseem Chhabra
Narrated by: Sagar Arya
Length: 5 hrs and 2 mins
Categories: Bios & Memoirs, Celebrities
5 out of 5 stars 5.0 (2 ratings)

India's first biography of Shashi Kapoor sheds light on one of the country's most enigmatic personalities - an actor who straddles the worlds of commercial Hindi cinema, theatre and small-budget art movies; who is, at once, an earnest householder and a committed star.

In this rare book, we are offered glimpses of Shashi Kapoor, the family man - son of Prithviraj Kapoor, husband of Jennifer Kendal, and father to Kunal, Karan and Sanjna. We are led through Shashi Kapoor's film career - his debut as a bright-eyed child-actor in Awara; his emergence, in the hectic 1970s, as India's busiest performer - with a slew of hits including Deewaar and Trishul; and his rise to international prominence with Merchant-Ivory's The Householder and a 'trilogy' of films on older men with fading pasts. Equally, we are provided with an astute analysis of Shashi Kapoor, the businessman - the proprietor of Film-Valas; the producer of Shyam Benegal films; and the distributor of Bobby.

Makes you feel like you knew him. Makes you cry.

Through films we begin to feel like we know an actor. The various characters an actor plays form in our minds a certain sense of the persona. Through a good biography we begin to feel like we knew the person. We smile for and with them, we have frowns as we read, we feel anxious when they’ve felt it, and then if it’s a really well written biography we cry. And cry I did.
I was born in 1981. And my understanding of Shashi Kapoor had always been as a mild mannered counter part to people like Amitabh Bachchan. Thanks to this book I’ve now realised at 36, that Shashi Kapoor was such a beautiful actor, star and Husband. Choosing to do films with people for passion, working always as a professional, and most importantly being first a Husband, in love, seeking and surrendering, made Shashi Kapoor an immensely lovable star for me post reading this book. My Mother used to love the Merchant Ivory films and I’d almost forgotten that I’d watched so many of them growing up. Now I’ll probably watch a lot of them again. Really glad I read this book. What touched me the most and will stay with me forever was his love for his Wife and how that mounded him into his best self. Till she was no more.