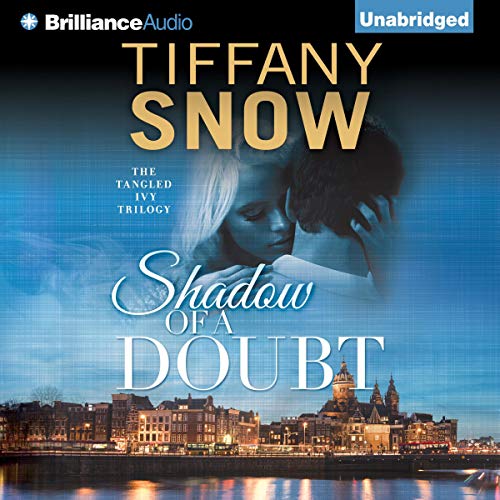 Shadow of a Doubt

By: Tiffany Snow
Narrated by: Karen Peakes
Try for $0.00

Ivy Mason has it all: beauty, a plush apartment, a fancy car, and a debonair British spy boyfriend who pays all her bills. If only her boyfriend was in her life - and her bed - more than just sporadically.

Part of an underground British agency called the Shadow, Devon Clay knows that secrecy is what has kept him alive. Anyone he loves is a liability, and being involved with him puts the other person in grave danger. Yet Ivy is someone his heart can't resist.

When an enemy from Devon's past returns, the spy and his girlfriend are thrown headlong into an international conspiracy that puts everyone Ivy loves at risk. From the Missouri River bottoms to the brothels of Amsterdam, Ivy and Devon must outrun and outmaneuver the forces allied against them, and no one can be trusted.

What listeners say about Shadow of a Doubt

COULDN'T PUT IT DOWN & DIDN'T WANT IT TO END

This, and the 3rd book in the Trilogy, is action packed as Devon and Ivy continue to battle their way through various sharp twists, unseen bumps in the road and nerve racking suspense as they try to come to terms with the many knocks that karma keeps giving them. One minute they're rock solid but, in the blink of an eye, they're not and Ivy is forced to find another shoulder to cry on. People aren't who they seem to be, the situation goes from bad to deadly, who exactly are the good guys?, can they get away?, what is the real truth? and many many more questions arise as you're listening to this plot driven, very addictive, nail biting and gripping thriller/chiller that takes intrigue to the max.

Book 2 lacked the sex scenes but it made up for it with a huge dose of angst and book 3 does have a few..... and what book 3 also has are some very romantic scenes too. Ivy did some smack your head with her stupidity scenes but I suppose it added to all the drama and action. Brilliant writing of character growth as Ivy overcomes her past and the elusive Devon finally lets love in. The evil characters are truly dark, manipulative and deadly, various other characters step up/come clean or just shock you, the loveable Heroine has a lot to handle and come to terms with... including her own mortality. And Devon..... well the handsome, charismatic, mysterious sexy British Spy blows hot and cold until walking away from Ivy is no longer an option because keeping her safe becomes his sole purpose.

Tiffany Snow has outdone herself with this awesome Trilogy.... it has layers upon layers, amazing characters, a seriously intense edge of your seat plot that's so utterly addictive and a love story that builds and builds to become breathtaking. I'm in awe of her skills as an Author and her ceaseless ability to pull me in, pull out every emotion from me and, finally, pull off a HEA ending that was just delicious. And the excellent narrator brought it all to life perfectly.

Worth a credit? And this is another shocker.... no need to spend credits as they're all under $8 so I just bought them. But each and every one, IMO, definitely would have been very very creditworthy.

cliffhanger... at the end was the best.

Sex wa explicit if you are looking for that..Story line is good. It seemed to be repeating itself I'm the middle. Michael Meyers over and over... but the end had a great cliffhanger

I usually avoid contuating stories, but I am anxiously looking forward to the conclusion. Ivy is a new super shero .

Ready to quit 1/3 of the way.. Pushed to 60%. It got worse.
The storytelling is extremely uneven and unfocused. My suspension of disbelief could no longer be suspended. The characters seem to become more immature as you go and scenarios are more than improbable.
I won't be finishing the series after this one.

There’s so much going on! I figure I know the end, but want to see how it gets where it’s going!

Can't wait for December. I have enjoyed getting to know Ivy and Devon. I thought the writing was better this time and zipped right through this book.

loved it! suspense, sexy drama. never a dull moment can't wait for the next in the series.

Loved it but there has to be more

This can't be over what happened? did he get her back? Did he quit his job and lived happily ever after with her?

I am a huge fan if Tiffany Snow! This was a great book. It was lots of twist and turns and suspense! I also love the personalities of the 2 main characters Ivy and Devan, the agent. This is a story that was masterfully told! I would definitely recommend it!

love tiffany snow books. however on this occasion absolutely dispose the main character, Ivy. insipid and self absorbed., bag of bones I lol I really wish that Devon. would end her.