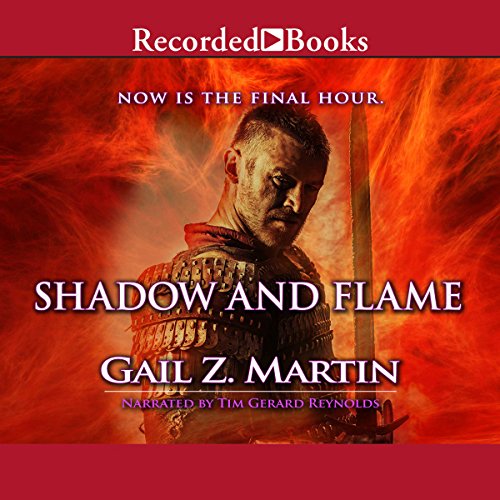 Blaine McFadden and his allies have brought magic back under mortal command and begun to restore order to the beleaguered kingdom of Donderath. Now, new perils and old enemies gather for a final reckoning. Foreign invaders, a legendary dark mage, and vengeful immortals fight Blaine's battered forces for control of the continent. Blaine's weary army is the only thing standing between a kingdom struggling to rise from the ashes and a descent into fury and darkness.

What listeners say about Shadow and Flame

GAIL AND TIM....THEY MADE IT COME ALIVE!

Where does Shadow and Flame rank among all the audiobooks you’ve listened to so far?

I would have to say the series as a whole was in my top 15 series. Which is saying a lot because I kind of started losing interest in Epic Fantasy when every story was about a Mage!?

All of the different characters.

Which character – as performed by Tim Gerard Reynolds – was your favorite?

Blain, but they all rocked with TGR reading.

Loved the series for the journey it took you on. Never boring, which I find a lot of in the Mage genre....lol

I liked the bad guys better than the good guys.

The bad guys were tougher and more interesting. I hated the characters of Blaine and Kestel. He was a whiny guy that got beat up to the point of death so many times I lost count. She was hard and pushy and aggressive and clingy.

I love the story but..

The story of Blain and his companions is great but it seems like the description of the battles goes on a bit to long. Kind of like G.O.T. you wonder if there will be anyone left in the country.

Fantastic conclution to a exciting adventure

Where does Shadow and Flame rank among all the audiobooks you’ve listened to so far?

I have listened to a lot of books I don't always take the time to review them, So it was good.

Kestel. Always wanted a woman who would kill for me.

Which character – as performed by Tim Gerard Reynolds – was your favorite?

All of them TGR is awesome....

I loved this book to be honest I enjoyed the entire series it was hard to finish, only because I didn't want the book to end