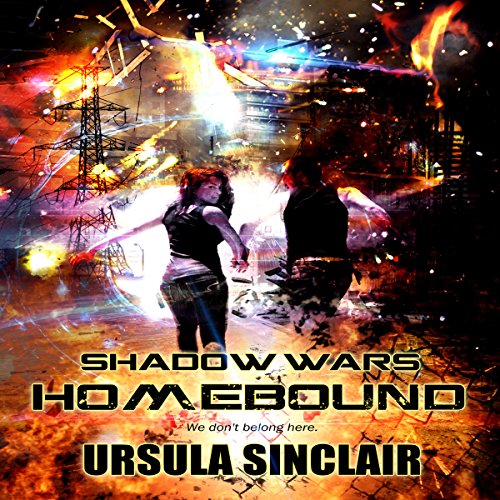 By: Ursula Sinclair
Narrated by: Todd Van Linda
Try for $0.00

Did you ever feel as though you don't belong?

Veil had been a step out of place all his life. Until one day he found a phone that took him on a path far beyond the world he knew. But to get all the answers he had to save the princess he fell in love with - only to lose her once he made her a queen.

Nikki never felt she quite belonged. Until she met a man who saved her life and placed her on a throne she never knew was hers. But in order to be queen and save a world at war, she had to give up Veil.

Would you walk away from the love of a lifetime if you could prevent the destruction of a planet?

Violence. Adult Situations. Recommended for 18-plus

What would have made Shadow Wars: Homebound better?

I would have liked to see more of a building of the characters before they slept together or dealt with emotional moments. If they hadn't had such a strong feel and sleep together so soon, I might have been better with their relationship as later in the book I feel they are stronger as a couple. In a scene with a death, the characters had reactions that I didn't feel lead up to that feeling from him.

There were a few moments the narrator seemed to miss deletions in the editing phase and repeated words. There was a point in the story where it sounds like a slight twang to the background of the room, giving a sound of a small echo to his voice. Then in the fast moving scenes of being on the flee, fighting, or thinking the pacing felt off. In trimming and editing his recording, he splices sentences together to fast to try to show the quickness of the moment, but it sounds like a run-on sentence. I really don't like this feel as it made the cadence wrong for me.

Would you recommend Shadow Wars: Homebound to your friends? Why or why not?

Not as an audio, unless they use headphones. Maybe as an ebook if they enjoy high heat sexual moments through out the book. If they listen to audio, it'll be heard to all.

Who would you have cast as narrator instead of Todd Van Linda?

I don't know many narrators, but I think Todd could have done better with the editing of the story.

Once Nikki is in the position she's to be in by her right, she excels at a strong, smart woman. She knows what she wants and gets the job done. I will give Nikki her credits for that. I do enjoy the way she uses the unspoken hinted knowledge to her advantage. Very well done Nikki. For this, the book earned some credit back in my mind.

About half way the heat between them kicked up to a high. At this point I was finally feeling comfortable with them as a couple and what they needed to do on the new planet. The slipped into roles at this point and became someone more.

A love bound to be doomed

Fantasy books are fun! I don't usually read sci/fi fantasy, but the combination of sci/fi, fantasy and romance kept me engaged. I highly recommend the book and can clearly see movie potential if it was not all the sex scenes! It is not like i need all the sex scenes! So i would like it to be a little less to be honest and that keeps it from getting full score! I would say that Shadow Wars: Homebound very nearly succeeded being a perfect book! Ursula Sinclair is a name i will remember!

What did you love best about Shadow Wars: Homebound?

Nikki has been kidnapped and locked away. While trying to figure a way out of this scary situation she realizes she still has her cell phone and tries to call for help. Her phone will only allow her to contact only one number and the person who answers is only interested in hooking up not helping out.After Veil finishes his lunch he realizes someone has lost their cell phone. When know one lays claim to it, he decides to leave it at the hostess station in case some one comes to back for it. While making his way to the front of the restaurant to leave the pone, he realizes that there is some one on the line and she's asking for his help. After Listening to the woman's story about her abduction he promises to get her help and heads to the nearest police station not knowing that this one decision will drastically change both of their lives and forever bind them together.NIkki and Veil's story was a very enjoyable one. While trying to figure out the mystery behind Nikki's abduction these to perfect strangers find that they are actually better together than they ever were apart. I love how Veil became very protective over Nikki without knowing exactly why he felt that way. Nikki's trust in Veil to keep her safe no matter the circumstances created a bond between the two them that was very heartwarming for me. Also, I loved the narrator of this story. Todd Van Linda makes for a wonderful storyteller. This story had all, mystery, drama, romance, betrayal. All the elements that make for a great story. I look forward to seeing what's up next for these two there's bound to be more drama in their future. Yes, it ends in a cliffhanger.

What was one of the most memorable moments of Shadow Wars: Homebound?

The most memorable moment was Nikki proved she was more than just a pretty face, that she would fight along side her guards.

What about Todd Van Linda’s performance did you like?

Todd Van Linda performance made the story that more interesting. He put so much emotion into his reading of the story.

The most emotional part of the story for me was when Veil though that he and Nikki were making love for the last time. You could feel the anguish he was going through.

What made the experience of listening to Shadow Wars: Homebound the most enjoyable?

The story and characters!

What was one of the most memorable moments of Shadow Wars: Homebound?

When Veil finally finds out his purpose and meets his dad!

The narration was a C+...the editing needed work...and the sex scenes were weird....The voices were pretty good....

I could have....the middle was a little dull...but overall this is a good story!

Veil and Nikki are from another planet...not knowing this, they have lived fairly normal lives on earth. Well it all gets a little crazy for these 2 and they are swept up in a dangerous adventure...Veil rescues Nikki and they are on the run! They fall for each other which is inevitable and when they learn there true identities they are shocked...but not even bloodlines and boundaries will keep these 2 apart...and we get a great ending!! I hope there is a book 2....because I would totally listen to it!!!

I read this book previously and enjoyed it. Listening to the narrator bring the story to life was even better.

Sci-Fi with a Strong Romance Theme

I would recommend this to anyone who isn't offended by strong sexual content.

My favorite character was probably Veil. His dedication and care for Nikki warmed my heart.

Have you listened to any of Todd Van Linda’s other performances before? How does this one compare?

I've never listened to any other performance by Todd Van Linda.

I think it was probably when she made that final decision. (Not going to do a spoiler by telling.)

I don't usually read books with this much sexual content, but I enjoyed this one. The narrator was VERY enthusiastic when he did the sex scenes, and it made me smile. All women should have a man who puts into a love scene what this narrator puts into the book! This was a really good Sci-Fi romance with enough action and enough romance to please everyone.

Ursula Sinclair’s Shadow Wars: Homebound is a creative and interesting story about two people meeting via technology and by all reasoning, accidentally. Veil, a young adopted male living in the U.S. finds a unique cell phone. Face-time capabilities he discovers a beautifully stunning woman answering the phone. Nikki has been kidnapped, her phone only dials the one phone which he holds in his hands and a bald fierce looking man is holding her prisoner in England.

The fierce bald looking man and some others radiating blue laser blasts are now tracking him down. They take on an entire police force and kill an F.B.I. agent before Veil decides to hop a plane and rescue his princess. To save her, he must not only find and free her but he has to get her away from the “out of this world” men in dark trench coats.

Now, Veil and his princess Nikki discover they are linked in more ways than just the cell phone. She is his princess and he is her lead. Together they must reclaim and rule a distant world and fight off an army of Shadow Warriors. The ending was a twist I was not expecting!

Shadow Wars is a creatively written science fiction book with some romance. The character development was well done; she made all the characters come to life for me. The story line flowed easily and was consistent. Nikki and Veil came across as very strong characters that are visibly growing.

Todd Van Linda did a good job of narrating for the most part. I did not enjoy his rendition of the sex scenes. He was a bit enthusiastic and noisy. I found myself laughing. Otherwise I thought he did a good job.

The production of this book was a bit confusing at times. Words were repeated and at times spoken too quickly as if it were on fast forward. I do not believe this was Todd Van Linda’s performance but rather technical.