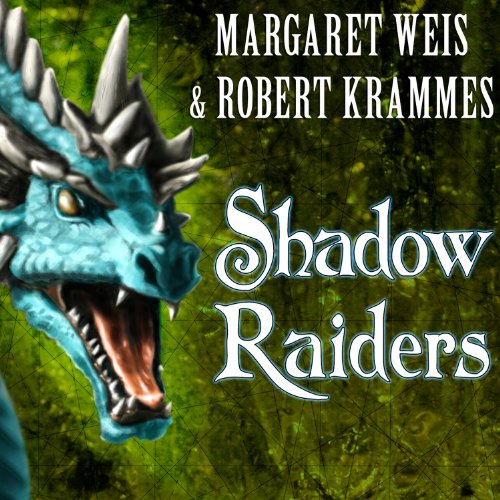 By: Margaret Weis,Robert Krammes
Narrated by: Kirby Heyborne
Try for $0.00

The known world floats upon the Breath of God, a thick gas similar to Earth's oceans, with land masses accessible by airship. The largest of these land masses are ruled by the rival empires of Freya and Rosia. Magic is intrinsic to the functioning of these societies and is even incorporated into their technological devices. But now a crucial scientific discovery has occurred that could destroy the balance of power - and change the empires forever.

What listeners say about Shadow Raiders

I cannot wait for the next book to come out. In the audio book genre, the books are successful in large part to the voice they use to tell the story. Kirby Heyborne was the perfect choice for the book. I hope Kirby stays through the rest of the series.

For me this started out painfully slow with far to many detailed decriptions. For the first 8 hours segment I was almost ready to leave it. The story line started to pick up, come together and become more interesting to me around the 13th hour. Then just as it starts to feel like a real story and you finally start to care about the characters... boom it is over and you are left hanging with many questions. Obviously meant to get you to move on to the next book. If a cliff hanger is what you are looking for then this would be it and be prepared to have to wait for the next book to answer those question.
The narrator does a good job with the story and the many characters, but in the slower parts of the book he does sometimes tend to drone (him or the book?). However, when the story heightens so does the narrator.

The entire story was awkwardly constructed. The authors attempted to meld a 1700's European-style culture with one based heavily on magic, and it just doesn't work in this story. We're led to believe that magic is part of the intricate fabric of this world, yet they use muskets for fighting. Really? And despite using magic "constructs" to make these muskets accurate, mere physical rifling of the barrels makes these guns more accurate than the use of magic? Really? If magic is so significant in this world, why do the characters seem so oblivious to it and why is it that when some character pops up with the ability to perform magic, it seems forced? The story seems to gratuitously throw in some dragons, griffins and wyvern. They're not necessary and feel "forced." At no point did the authors create a story line that was remotely believable. Too many competing ideas awkwardly forced together. Despite Margaret Weis' name as author, this feels to much like an amateurish, first-time attempt.

Has Shadow Raiders turned you off from other books in this genre?

No. I immedately turned to Theft of Swords: Riyria Revelations, Book 1 by Michael J. Sullivan, which is an amazing story, so well-crafted with myriad interweaving story lines, plots and an underlying mystery that just pulls the reader on and on and on -- this book is what Shadow Raiders wishes it could be.

Would you be willing to try another one of Kirby Heyborne???s performances?

Oh yes. He is a wonderful narrator. Perhaps not best suited for this book, but if you haven't listended to him read The Gone Away World, you are missing perhaps one of the finest narrations. When the story (as in The Gone Away World) is full of subtle jokes and dry humor, Kirby is flawless. In Shadow Raiders, the story was flawed...

If you could play editor, what scene or scenes would you have cut from Shadow Raiders?

The entire book would need to be re-editied and re-arranged. Granted, that's a harsh criticism, but if the book opend with some basic understanding of the nature of this world, of the use of magic and the societies that formed from it, it would have been better. I just could not buy into the proposed technology and imbued magic the story was trying to sell.

A fast paced, action packed adventure. I like it when the protagonist is a bit of a klutz!!!!

I didnt like it. lots of slow paced moments
good action scenes..
the part with the clergy(brothers, father and knight) is very boring..ouch
the central mystery is OK
I dont know what it lacks..but something was OFF

I managed to finish the story, barely.

I finished the book but this is clearly a series and I won't be getting book 2. I wish I had listened to one of the other books I had waiting.

The book is written from multiple viewpoints the view is omniscient. The authors have this horrible habit of rewriting the same scene from a second or even a third perspective repeatedly through the book, even after the reader knows what has happened. It is very frustrating and makes the story drag. The book could have been cut down 25-35% and told the story in 15 hours and just as well, but it felt as if there was a page count they were targeting.

Which character – as performed by Kirby Heyborne – was your favorite?

The narrator was generally good, and did well with translating the feelings into tone. This did detract from the book in places as, when the characters were frantic, it made listening to the story difficult.

Do you think Shadow Raiders needs a follow-up book? Why or why not?

No, this one needs to be re-written and shortened. Only then would a 2nd book be worth listening to.

The author writes to get from point A to point B in the story, in preparation for book 2. In a couple of instances things happened which are clearly impossible based on the timeline set by the authors themselves. No spoiler alerts here but, right at the end, it is clear the authors want to leave the main characters in a very specific place and position and something is manufactured to make that occur. When the reader gets to this point there are comments about the actions of from 1 faction which imply communications had to have occurred which clearly fall outside of the timeline. You can't send a message about person A to person B weeks before you even know you are going to meet up with person A to begin with. This is a book, so the author controls everything, but this feels obviously manufactured considering the setting and when I as a reader see that it is very frustrating and distracts from the story.

A fast paced, action packed adventure. I like it when the protagonist is a bit of a klutz!!!!

Narrator sounds so bored it put me to sleep.

I love Margaret Weis - I have never found a book written by her (regardless of co-writer) that I didn't like. This sounds like a very interesting story but the narrator sounds like he is bored and so I drift off and find myself thinking of other things. I'm about 3 hours into the story now and I will try to get through the rest of it, but it's a bit frustrating. It is, however, motivating me to do other things I need to do (laundry, dishes, homework, etc.)

Perhaps the pace will pick up soon - there is an interesting mystery developing. I know the narrator is affecting a calm and soothing voice that is pleasing to hear and would work well for a short commercial or other short spots, however it does not work well for this venue. As a former officer in a national voice over talent agency, I find this choice of style puzzling and I hope there is a change for future books.

Don't get me wrong, Kirby Heyborne does a fine job with clarity and with periods of character dialogue, it's just the general narration that has me wondering if I'll get through the first part, let alone the entire book. As I said, perhaps the action will pick up and as a result the narration will become more animated.

Again, there is an interesting mystery developing and I do find the system of magic interesting. There seems to be a great deal of court intrigue to be found within the story and at this point I do not foresee a great deal of overly gruesome and detailed fight scenes.

I've rated the book at 3 stars due to narration. I've given it as many as 3 stars because the actual story seems like it will be as good as other of Weis' books. I will update the review and rating if I am able to finish the book.

Excellent first book! Plenty of well written action and a good story to go with it. Great characters that you will quickly come to love and root for........and unlike George R. R. Martin's pitiful story, this one actually has heros!
Really looking forward to the next book in this series.

I loved the dragonlance series all of them, this is a great story as well, can’t wait to start the next book.