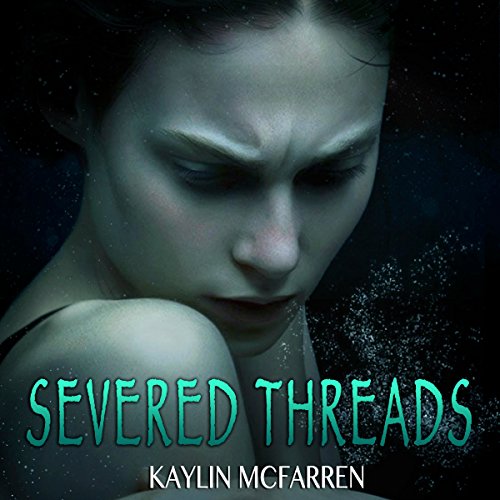 A hidden treasure under the sea reunites ex-lovers desperate to save the ones they value most in Kaylin McFarren's award-winning romantic suspense novel, Severed Threads. Believing herself responsible for her father's fatal diving accident, Rachel Lyons has withdrawn from the world and assumed a safe position at a foundation office. When called upon by a museum director to assist Trident Ventures with the recovery of a priceless relic from a sunken Chinese merchant ship, she has no intention of cooperating - especially after discovering her former love interest is involved. But Rachel soon realizes she has no choice when a drug-dealing gangster kidnaps her brother and demands two million dollars for his safe return.

In order to rescue him and gain control over her life, she must not only overcome her greatest fears, but also steal the Heart of the Dragon out from under Chase Cohen - the same cursed relic that is holding the museum director's life in peril. With three lives now on the line, including her own, Rachel must relive the circumstances that lead to her father's death. Will she gain Chase's trust and recover the Mai Le treasure in time, or will they both die trying?

I really enjoyed this book with the treasure hunting theme. The action in the story was great with the suspense and the supernatural elements. I was pulled into this book from the very beginning. Diving with sharks, pirates, mystery, murder, and treasure all kept me on edge. I loved the romance in this book too! I requested this review copy audiobook and have voluntarily written this review. I will definitely listen to more books by this author and narrator. The imagery in this book was so well done too. I had shivers at many of the diving descriptions scenes.

Where does Severed Threads rank among all the audiobooks you’ve listened to so far?

I was asked to read Severed Threads and give and honest review. The title is currently on Kindle Unlimited and with and Audible upgrade of $1.99, I jumped on it.

This is the first novel I’ve read/listened to by Kayline McFarren, and I just have to say is WOW! There was so much action at every turn I was on the edge of my seat! When I thought the story was going to go one way, NOPE, it redirected and completely went another. It was brilliantly fantastic! I loved everything about it; I am moving on to the next on ASAP. I just have to note that John Jaret as a narrator, superb. I kept thinking there had to be a female narrating Rachel Lyons character, no, just John.

Severed Threads is and incredibly fast paced treasure hunting adventure that will keep you on the edge of you seat from the first page. Throw in a little romance, drug dealers, ghosts, ship wreaks and a plot for revenge and it leaves you in a constant state of anticipation, waiting for the next chapter. I absolutely loved it and give Severed Threads 5 Boundless Stars....Sara

Our protagonist and treasure hunter Chase Cohen is having a run of bad luck. Treasure is not forthcoming, bills coming due, competitors out to destroy him, and to top it off his love life is in the proverbial head. Chase is on the trail of a sunken Chinese merchant ship containing a large amount of gold treasure and a priceless bobble known as the Heart of the Dragon. The artifact will end a deadly curse for Chase’s professor friend and the treasure will put Chase back on top of the game. While financing is being sought, Chase is reunited with his old flame Rachel Lyons; sort of. Their relationship ended four years ago when Rachel’s father Sam Lyons died in a mysterious diving accident while partnered with Chase. Rachel was devastated, lost all desire for diving and the sea, and Chase in unbearable guilt disappeared from view. The chance meeting did not go well; go figure. Our unhappy couple, being thrown together due to the mission, spends the rest of the book trying to make amends and determining whether there is any trust left. It’s the classic tale of love lost and rekindled. The full story is definitely complex. There are many additional sub-plots and plot twists as the treasure hunt progresses. Perhaps too many varied characters with an interest in what Chase and company are up to. I did enjoy the story though. The characters are well developed, there is plenty of action and suspense, and the narration is exceptional. This audiobook was given by the author, narrator, or publisher at no cost in exchange for an unbiased review via Audiobook Boom.

"Severed Threads" is book one of four in a romantic suspense series. The basic premise is a hidden treasure under the sea reunites desperate ex-lovers. Add in a drug-dealing gangster and a cursed relic and you have the ingredients for a great story. While not perfect, "Severed Threads" sits squarely at the top of its genre. If you like romance novels, this one has an above average suspense story to it. If you like suspense stories this one has an above average romance element that won't bother you at all. Also, the narrator completes the audio experience by doing a good job with the material. I will definitely be picking up book two.

Finally, This audiobook was provided by the author at no cost in exchange for an honest review, courtesy of Audio Book Boom.

Plenty of action and a mystery of whodunit. Enjoyable read or listen !

This books started out grabbing me immediately. Packed with adventure, treasure, drug dealers, pirates, sharks, and mystical fairy tales of lost treasures it provides a great mix of fun and a bit of romance. The main characters are not morons like many other stories where they lie way too much to get into unrealistic situations. I look forward to getting the next books in the series. The narration was stellar! I received a free review copy of this book at my request and have voluntarily left this review.

All in all, pretty good

So, for an action/romance novel, I really enjoyed this audio book. I thought it was well written and had an interesting story line. It had plenty of action and even mixed in some history. The narration was a bit odd for me. John Jaret's narration was inconsistent. When just describing a scene, he had good pacing and tone, but in the more tense scenes, he started reading faster and sounded breathless with his own excitement. The major oddity for me was the voicing of Rachel's character. It seemed like he used something to manipulate his voice to a more feminine sound, but only for Rachel. The other females he voiced in a normal affectation of a female voice. This just... seemed unnecessary and I found it distracting. Not distracting enough that I didn't finish and enjoy the book, though. I will definitely move on to book 2.

This book was not for me. It sounded good and got good reviews, but I was looking for suspense and got melodrama-general hospital style. Towards the end of the book I thought it was getting interesting, but then it fizzled for me. I am committed to reading all 4 books... they all sound interesting and they are not my normal read. Part of the reason I didn't like this books was the main narrator, I would not have enjoyed it as much as other readers even if I read it myself though... it just would have taken much longer. Gonna start Buried Threads now. Crossing my fingers that I don't want to see all the characters lose their lives in bloody ways in that book.

Dive into this thrilling mystery

This book was narrated really well by the male narrator, John Jaret, but I did not like the parts where Rachel was narrated. It seems like there was another female narrator for Rachel, and I know according to the audiobook info that he is the only narrator (unlike the next books n the series that have two narrators). Her parts sounded pasted in, in both voice and in the general flow of the audio itself. Whether he used something to manipulate his voice to make it sound completely female and unlike his own I do not know but other female characters narrated by him did not sound the same. Furthermore, her dialogs sounded disconnected, which is what I believe made her stand out so much and disrupt the flow of the book. It’s the only “bad” thing I can say about the narration because Jaret really is a great narrator with a wide range of character voices and I think he did a great job all in all.


The treasure hunting was thrilling, fast paced and exiting, the touches of history interesting and the diving well researched and incredibly realistic. I enjoyed the different characters and the plot thickening with many twists and turns to keep you guessing what will happen next. The book itself I written well, I liked the story very much and am more then happy to move on to the next!

Kaylin McFarren's writing is fast, to the point and certainly more than capable of keeping the reader glued to the book and awaiting the next one. very well done.!!