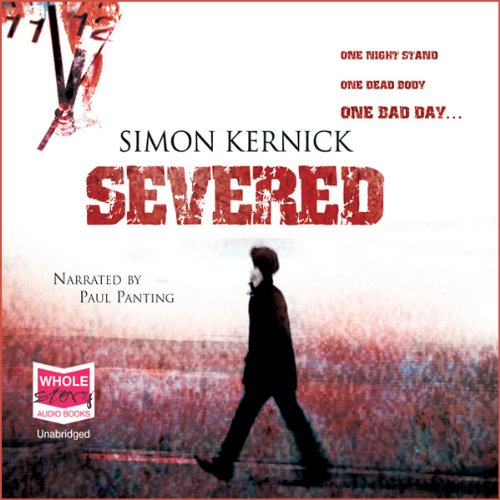 When former soldier Dan Tyler wakes up in a strange room on a bed covered in blood, with no idea how he got there, he thinks he's stepped into someone else's nightmare. But he's wrong. This is reality. The corpse beside him is Leah, a girl he's met recently. And it gets worse.

As he staggers from the bed the phone rings, and a voice tells him to press play on the room's DVD machine. The film shows Tyler killing Leah. Then he's told to go to an address in East London where he's to deliver a briefcase and await further instructions.

There's no way out. The evidence against him looks rock-solid. Tyler's heading into terrible danger. If he's to survive the next 12 hours, he must find out who really murdered Leah - and why.

As the title said, started to listen over the weekend and didn't sleep until I finished... my faultfor starting it at 8 pm! gory in parts but well written. Main character did seem to be extremely lucky in the book but this did not detract form the action too much but loved it anyway. Want more Simon Kernick unabridged titles here please?

Super stuff from Kernick once again...

Such a superbly talented author. Simon Kernick delivers another super story in Severed.
The book itself spans a 24 hour period. a period which proves to be extremely eventful in the life of Dan Tyler. He's woken up next to a dead body, and has been perfectly framed for the murder. His only hope is to do as he's told, whilst trying to work out who is behind it. His past soon catches up with him.
Great book from Simon Kernick, Very well narrated by Paul Panting.
Recommended.

This is the third Kernick novel I have come across. I first read 'Relentless' which I couldn't put down, then 'A good day to die' which I found equally absorbing.
What you get with Kernick are fast paced thrillers that grab you from page one and hold your attention throughout. In actual fact they grab you from the summary on the back page, that's certainly how I was drawn into his books.
If you are new to Kernick's work and like puzzling thrillers then I completely recommend them all. If you've previously enjoyed his work then you'll love 'Severed'
The novel immedietly starts with a puzzling situation that pulls you in and doesn't let go until the resolution. The characters that you meet along the way only add to the tale and will have you second guessing their roles as the novel progresses.
In short, it's a great novel, well worth reading and I can't wait for his next one.

An enthalling albeit unrealistic page turner

A good yarn, but not as good as Relentless for me. Very much in the style of 24, the whole story is in the 1st person which I found a little tedious, furthermore I found the motive for setting Tyler up as somewhat implausible. nonetheless a great tongue in cheek listen!

I bought this on the strength of the author's terrific book, "Relentless". "Severed" is a more surreal story than the latter, but has the same qualities of fast pace, surprise and shock. The reader is good too, which always helps. Once I started listening I really couldn't stop as I wanted to find out why these terrible things were happening to the "hero" Tyler. I'll be looking out for more books by Simon Kernick.

I can see why Panting was Severed from future book

This is a usual Kernick book, perhaps a little more cliched than other books. I'm unsure whether I felt this because of the narration. Paul Thornley, who has done other Kernick books, has a more natural style. The narrator of this book did not leave me Panting for more (sorry!). With too much emphasis, his narration has too much of the Jeremy Clarkson telegraphed style for my liking. It is the narration equivalent of canned laughter.

All said this will not put me off Kernick, who is predictably good value if escapist macho stuff is what you want.

I really found this book totally implausible, and thoroughly unpleasant. I don't understand all the glowing reviews. the best I can say is that I did actually finish the book, managing to 'cope' with all the unnecessary violence and unexplainable activity - this as mainly in the hope that I could find some reason behind all the mayhem. I was not to be so lucky.

The characters were weak, and acted in such a strange way that I was driven to shout at the iPod that he wouldn't have said or done 'that'. The FINAL explanation for the dreadful actions throughout were absolutely beyond credence.

Definitely not for me.

Would you be willing to try another one of Paul Panting’s performances?

The narration was very flat with stereotypical accents for each character (that said, the characters were stereo types of any London cop TV Show) and there was little passion in his voice.

If you like films like the last "Sweeney" you'll like this. I was dubious about buying his due to the title alone however the reviews "sold me" and I still feel short changed despite getting it on a "2 for 1" deal!

The opening leaves you numb

I really like Simon Kernick's style of writing
It is basic and gets on with the story without too much messing around. Like his last novel, the events take place in an extremely short space of time, 24 hours.
Paul Panting's aggressive style of narration suits my listening habit, basically bored at the gym, or walking the dog in a windswept park.
He manages to allow to empathise with the main character and worry enough about him that you don't want anything else to go wrong.
Obviously, this can never be allowed to happen as our hero- not just an ordinary guy this time, but a trained army assasin, gets deeper and deeper into the sort of situations that you don't really want to believe exist.
Simon manages to build the tension in such a way that you can not see where the next twist in the story will lead you.
Read this book at your peril, you may come out a weaker person at the end of it.
Better still, let someone read it for you!

This was an excellent story and narration. Easy to listen to and exciting. You are gripped right from the start.

Unrealistic and not plausible!

Very lame plot line and characters were poorly developed. Not as good as Kernicks other books!