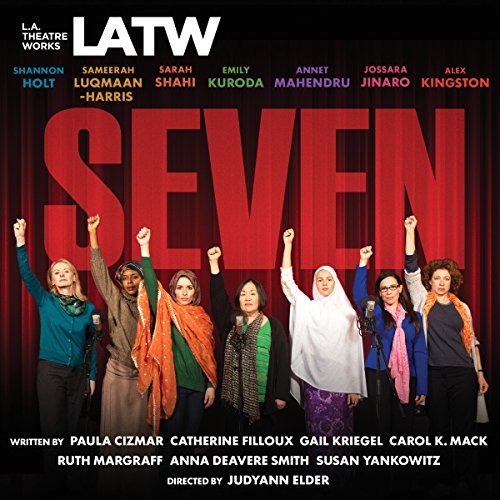 Seven women give voice to the voiceless. Seven is a documentary play created with the support of Vital Voices Global Partnership and is a collaboration between the playwrights and seven female activists from around the globe, telling inspiring stories of overcoming adversity to effect real change and improve the lives of women.


Directed by Judyann Elder and recorded live in performance in January 2017 at UCLA's James Bridges Theater.

What listeners say about Seven

I wish I had the opportunity to see this live. With the narrative weaving constantly through 7 different women in different countries, it's a lot to take in, not enough grounding. In the writer's discussion afterward, they suggest this worked better than 7 long monologues, and the cost is minimal compared to a film, this script travels easier, but I feel as a listener, this is not the Best way to get the story told. Too much in scope and not enough in depht- although there is so much depth to these stories it may be easier not knowing more details. It is a good introduction to what these activists are fighting against. It is a good way to learn about conditions outside of the US, But this is not the best format for such a complex story

The play and subsequent recorded panel discussion with participants provide an enriching reminder of impressive women and movements in the world today. The seeds were planted at Beijing and although the play was first staged years ago the resonance is across a span of decades. Also, in this celebration of the honesty, guts and tenacity that the stories of these female leaders exemplify, there is more than once, the warm and serious recognition of the need for (and appreciation of) men’s efforts to step up on some key ‘democratic’ issues.