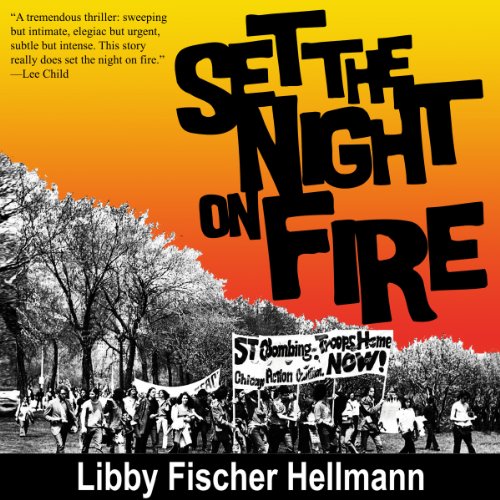 Set the Night on Fire

Set the Night on Fire

Someone is trying to kill Lila Hilliard. During the Christmas holidays, she returns from running errands to find her family home in flames, her father and brother trapped inside. Later, she is attacked by a mysterious man on a motorcycle.... and the threats don't end there.

As Lila desperately tries to piece together who is after her and why, she uncovers information about her father's past in Chicago during the volatile days of the late 1960s... information he never shared with her, but now threatens to destroy her.

Part thriller, part historical novel, and part love story, Set the Night on Fire paints an unforgettable portrait of Chicago during a turbulent time: the riots at the Democratic Convention... the struggle for power between the Black Panthers and SDS... and a group of young idealists who tried to change the world.

Set the Night on Fire was named a finalist in Foreword Magazine's 2010 Book of the Year in Mystery/Suspense.

What listeners say about Set the Night on Fire

"Set the Night on Fire" will have special meaning to anyone who came of age in 1960s America. For me, it brought back some fond memories, some embarrassment, and some pride. Ms Hellmann has accurately captured the spirit and idealism of those times. With perfect hindsight, we can now see the rightness of our anti-war activism, and the wrongness of some of our methods. Against the backdrop of this activism, "Set the Night on Fire" (the title refers to the Doors' famous song) tells the story of what some of these 1960s youngsters did to voice their opposition to the Vietnam war, and the repercussions of their actions some forty years later. The text refers frequently to the Celtic Knot, which illustrates the interconnectedness of all things in time and space. What we did back then has a lot to do with what is happening now; and what I do now will have unforeseen consequences for someone that I may not even know. In "Set the Night on Fire," the decisions of '60s activists has unintended consequences for their adult children, one of whom must piece together long-buried evidence to save her own life. Ms Hellmann has skillfully crafted an intricate knot, in which many strands come together to solve the mystery, yielding a satisfying denouement. The narrator, Diane Pirone Gelman, has a lovely voice, and does an adequate job of reading this audiobook, but lacks the repertoire of voices and accents to warrant five stars. I recommend "Set the Night on Fire" to all mystery-lovers, especially those who lived through the amazing 1960s. I will certainly be listening to more of Ms Hellmann's audiobooks.

I’ll be thoroughly honest and say that I know I am hooked on romance in AudioBook format, but wasn’t sure that a thriller or suspense novel would strike me in the same way. After a one-sitting, never remove the headphones listen; I can gladly report that this could easily become my new obsession! What a terrific way to spend a few hours, or entertain yourself during a long commute. Although, be warned: you will be itching to get back to this story.

Libby Fischer Hellmann has managed to incorporate history into a current story, bringing the reader the feel of the late 60’s, and providing an interesting storyline that will have you on the edge of your seat as the past moves forward to influence the present. The late 60’s in Chicago was a volatile time, with various groups seeking to make change in the social fabric of the United Sates, protesting against the Vietnam war, the ‘man’ and most all things establishment. While I am familiar with the more radicalized writings and justifications of bad acts, Hellmann brought forward the immense sense of guilt, confusion and the ease with which some may have been caught up in actions that escalated beyond their control.

With a clever separation of the book, the author has divided it into 3 parts: first and last are dealing with the present, the middle section weaves in the history providing a unique opportunity to present a character that is caught up in events that quickly spiral out of control, and he is left taking all of the blame and punishment. Narration throughout the story manages to delineate the characters with a subtle variance in tone that is not distracting to the ear, but gives a distinct feel for each of them.

The villains are rather lackluster in both approach and feel: although the tension created by their never-ending appearance is palpable, if not wholly effective. This is a story that will catch you up in the first few minutes, and not release you completely even hours after you finish. A must-listen for fans of thrillers and characters who will grow on you in surprising ways, this is the best 10 hours you will spend, continually or broken up in sections. I will, however, defy you to not want to reach and push that play button.

I received an AudioBook copy from the author for purpose of honest review for the Heard Word at I am, Indeed. I was not compensated for this review: all conclusions are my own responsibility.

Audiobook review: "Set the Night on Fire" was so addictive that I found excuses to listen! Not only was the story well written, but being a child of the 60s, I found I had a special affinity for the historical aspects of the book. Ms. Hellmann's masterful writing made me care about the characters and I felt like I knew them. She flawlessly drew me from the past to the present, time and again and tied these two storylines together in such a way that I could relate to both. In addition, every time I thought I had things figured out, there was a twist that added another layer and another level to the intrigue. The narration was great. Ms. Gelman was easy to listen to and played a significant part in drawing me into the book and keeping me there. Thank you both for a wonderful time!!

Superb blend of past and present

Would you listen to Set the Night on Fire again? Why?

I loved this book when I read it in print and I loved it when I listened to Diane Perone Gelman's pitch-perfect narration.

Libby Fischer Hellman does a superb job of bringing the past to life and making it relevant to the present. As the Vietnam War era fades from memory, the young people who protested the war may seem almost quaint in their naivete and wrongheaded in their methods, but their longing for a better world still resonates in our ever more violent time. Hellman uses the structure of a compelling thriller to dramatize the collision of past and present as old crimes and sins threaten the innocent adult daughter of two antiwar militants. Her characters are vivid and believable and the constantly building tension is engrossing, as long-hidden secrets are revealed and those who want to keep the past buried resort to murder to save themselves.

Slow starter but a great read

Set The Night on Fire, my 13th read/ listen from author Libby Fischer Hellman. I was given a book by the author and after having read it I decided to read more by this author & then another & another &... I'm glad I did. I'm a character reader, I get into the characters, their story, who/what they are, and significant characters in her writing are developed quickly & thoroughly along the way. Outstanding read! What other blurbs can I use to describe these books? This book is in all senses of the word, a thriller, from beginning to end. That’s it, no more spoilers from me though if there are more books about this character I can not wait to read them. Oh well, buy the book, read the books, get into a good author and some good characters as I have. Diane Piron Gelman’s narration adds to the enjoyment of the book. I was given an Audible copy of this book & I’m voluntarily reviewing it. (RIP Marley January 20, 2014 - July 24, 2018).

I would definitely recommend this book to a friend. It was a great book

The historical glimpses of a turbulent time.

Have you listened to any of Diane Piron Gelman’s other performances before? How does this one compare?

I have not. I was impressed by her performance.

Great storyline merging the past and the present bringing back memories from my pre-teen years.