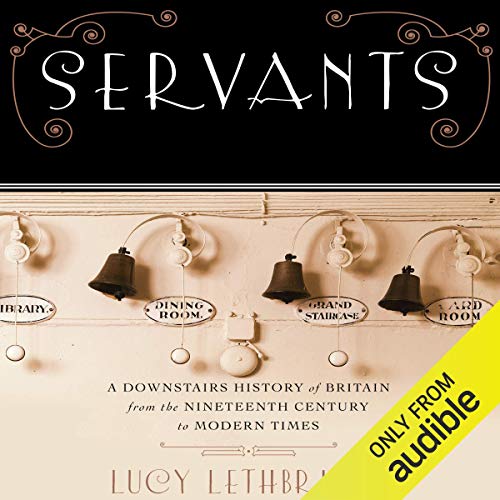 By: Lucy Lethbridge
Narrated by: Helen Stern
Try for $0.00

The vividly told lives of British servants and the upper crust they served.

From the immense staff running a lavish Edwardian estate and the lonely maid-of-all-work cooking in a cramped middle-class house to the poor child doing chores in a slightly less poor household, servants were essential to the British way of life. They were hired not only for their skills but also to demonstrate the social standing of their employers - even as they were required to tread softly and blend into the background. More than simply the laboring class serving the upper crust - as popular culture would have us believe - they were a diverse group that shaped and witnessed major changes in the modern home, family, and social order. Spanning over 100 years, Lucy Lethbridge - in this "best type of history" (Literary Review) - brings to life through letters and diaries the voices of countless men and women who have been largely ignored by the historical record. She also interviews former and current servants for their recollections of this waning profession.

At the fore are the experiences of young girls who slept in damp corners of basements, kitchen maids who were required to stir eggs until the yolks were perfectly centered, and cleaners who had to scrub floors on their hands and knees despite the wide availability of vacuum cleaners. We also meet a lord who solved his inability to open a window by throwing a brick through it and Winston Churchill’s butler who did not think Churchill would know how to dress on his own.

A compassionate and discerning exploration of the complex relationship between the server, the served, and the world they lived in, Servants opens a window onto British society from the Edwardian period to the present.

What listeners say about Servants

Interesting look into Edwardian Britain's service customs, but for a non-Briton there are quite a few terms the author uses but does not define, apparently assuming the reader already knows. As for the narration, Ms. Stern reads quotations mimicking the accents she expects that the writer would have spoken which takes me right out of the narrative as if I've hit a speedbump. Therefore we have Germans speaking in a cartoonish stereotypical manner, various forms of Cockney and other accents from the British Isles, and apparently Ms. Stern believes that all Americans sound as if they are from the Jersey Shore. This, combined with her halting manner of delivering un-accented narration, make it, while not an unendurable listen, harder to follow and less enjoyable than it could have been. I wouldn't say to avoid this book, but you might enjoy the printed version more.

I enjoyed the content of this book very much - it's a well-researched collection of slice-of-life accounts from both sides of the British social gap in the late 1800s and early 1900s. I appreciated that we heard from both the servants and their (usually oblivious) masters, and that the author followed the changing societal attitudes towards service as time went on and WWI began. However, I probably would have enjoyed it more as a physical book than as an audiobook. The narrator has a distracting habit of pausing every few words whether or not it made sense as a stopping point in the sentence, which breaks up the flow of the writing and makes it hard to follow.

excellent details to let your mind create the characters. look forward to more from this author and narrator.

This is the most comprehensive book on domestic workers and their history. Lucy Lethbridge does a marvelous job at delivering intriguing captivating content and still keeping an impartial tone.
This book allows us to understand the impact of servants on society development and how their decisions dramatically altered the course of history, shaping the world into what we know nowadays.
More than just the history of maids or cooks, this is the history of families, economy, women's rights, habits, education and specially the history of modern world values.I could have never imagined house workers to have influenced society that much, which just makes it more impressive.
Aside from the brilliant job presenting history with so many vivid details, the author also filled the book with dozens of fascinating stories, such as the maid who had her finger stabbed for touching the food. It's a very interesting book from beginning to end and it will surely keep you entertained.

A collection of stories about servants

I didn't come away with much more from this than an affirmation that classed societies don't work very well for those on the bottom. I got the feeling that the author admired these people, saw them as a type of hero or heroine, maybe they were--they certainly didn't have a lot of choices to act on their own accords.

I really enjoyed the historical experience that this book gave. I imagine going from the Edwardian period to today! Excellent listen.

The voice changed I could tell things were added, it was almost unbearable in some spots. I soldiered on nexuses I liked the information. But will avoid books by same performer