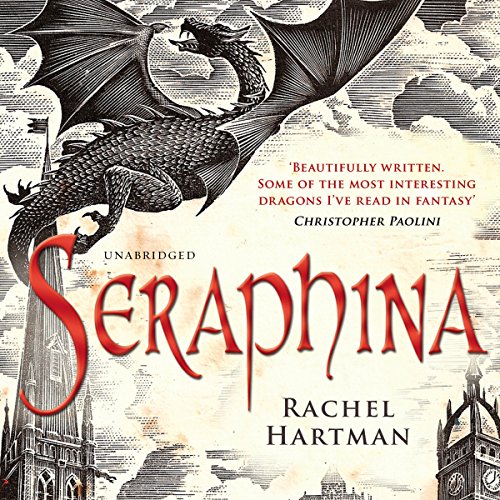 By: Rachel Hartman
Narrated by: Mandy Williams
Try for $0.00

The kingdom of Goredd is populated by humans and by dragons who fold themselves into a human form. Though they live alongside each other, the peace between them is uneasy.

But when a member of the royal family is murdered, and the crime appears to have been committed by a dragon the peace and treaty between both worlds is seriously threatened.

Into this comes Seraphina, a gifted musician who joins the royal court as the assistant to the court composer. She is soon drawn into the murder investigation and, as she uncovers hints of a sinister plot to destroy the peace in Goredd for good, finds herself caught desperately in the middle of the tension. For Seraphina hides a secret - the secret behind her musical gift - and if she is found out, her life is in serious danger.

What listeners say about Seraphina

Luckily I read Seraphina in Book format first and was absolutely entranced with how beautifully written it was. It was unlike anything I had read before, it almost sung itself to you, like the pages had a melody weaved into it's bindings. I was shocked to find out after that it was categorized as 'teen fiction' when it had such a mature language to it.
I then, at a later date, began listening to audio books and was thrilled to see this was available. I must say, probably because the book was so good, that the narrator really disappoints an existing fan which how monotonous and augmented she sounds.
At least if Alexa ever needs a respite, this lady could jump in. She is more robot than Alexa.
Please re-record these books with a couple of different narrators, it deserves it!

Loved it! You can find a bit of yourself in every character, I didn't want it to end

An audiobook that grows on you.

This has gradually become my go to "comfort listen". The story is fun, the dragons are fascinating and the narration is soothing. A firm favourite.