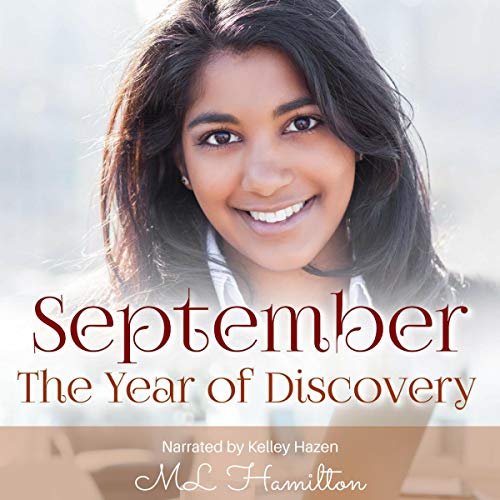 Twelve women connected by the death of another, realizing what they most want from life and reaching for it - this is the year of discovery, the year of new beginnings.

Roxanne Rosales moved from Boston to California after college to pursue a career in marketing. She enjoyed her work, but something was missing. Being alone in a new place felt intimidating. Until she met Mika Yates and her family.

Roxanne’s plans to go home evaporate after Mika befriends her and introduces her to Henry. The widower with two small children makes Roxanne think she might have found someone who could make her time in Sacramento less lonely, but when she discovers a lump in her breast, Roxanne is faced with the very real fear that she might have breast cancer. It’s a diagnosis that Henry isn’t ready to face again, but can Roxanne face it alone?

What listeners say about September

September: The Year of Discover, Book Nine was another great read by M.L. Hamilton. Roxanne had moved from Boston to California to pursue her marketing career after college. She enjoyed the job that she had but she was missing having friends and family near by. She meets Mika who introduced her to Henry, whom she is attracted to. She discovers a lump in her breast and everything seems to change for her. This was another great read by M.L. Hamilton and I cant wait to read more in this series.Kelley Hazen did a great job of narrating the characters so that you fall in love with them.

I am loving The Year of Discovery series. Hearing each individual story is great, but I think what makes it even more special is how the stories are so interconnected.

Roxanne is faced with the possibility of breast cancer and that kind of brings things full circle for some of the characters that have been regulars in the series.

Another amazing story written by M. L. Hamilton and narrated by Kelley Hazen!

I was voluntarily provided this free review copy audiobook by the narrator and found it inspiring. Life can change in a moment, as Roxanne learns. She feeling lonely in her new city until she meets Mika and her family. Just as things seems to be turning around for her, she has a medical scare and the edges of her world starts to crack. As with all the titles in this series, you are just absorbed into the story. This combination of author and narrator, can't be beat. Looking forward to next month.

I’m totally enjoying this Year of Discovery Series and this is book 9. The primary character in this book is Roxanne Rosales who becomes friends with Mika Yates when working in marketing and meets Henry. Henry is Mika’s brother in law who recently lost his wife Meredith from breast cancer, Roxanne and Henry seem to be falling in love then disaster hit as Roxanne find lump in her breast. Love Muttley and great narration! I cannot wait for next book, October. I was given this free review copy audiobook at my request and have voluntarily left this review. Thank You!

A little too political for my tastes

I don't like that opposing beliefs are relegated to that of "Mouth Breathers" a little overboard.

I appreciate the story line on breast cancer, but you make conservatives like myself sound like hate monger with a IQ of 20! I don't understand why its so important for woman to kill babies as their birth control ( 90 plus% are not needed to save the mothers life)

Another amazing book. I love this series. I highly recommend this book. Great characters and brilliant storyline.
Kelly Hazen as narrator is fabulous as always.
❤️😻❤️