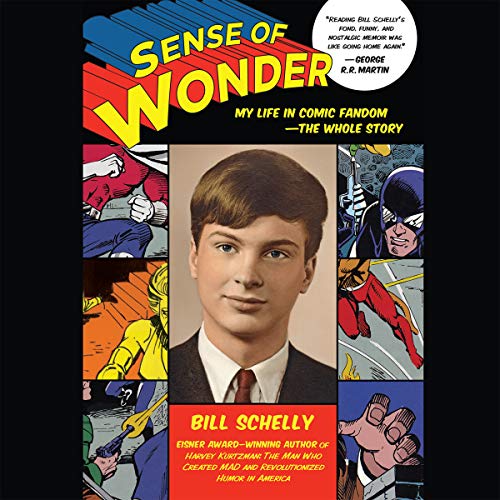 By: Bill Schelly
Narrated by: Derek Botten
Try for $0.00

A fascinating story of growing up as a gay fan of comic books in the 1960s, building a 50-year career as an award-winning writer, and interacting with acclaimed comic book legends

Award-winning writer Bill Schelly relates how comics and fandom saved his life in this engrossing story that begins in the burgeoning comic fandom movement of the 1960s and follows the twists and turns of a career that spanned 50 years.

Schelly recounts his struggle to come out at a time when homosexuality was considered a mental illness, how the egalitarian nature of fandom offered a safe haven for those who were different, and how his need for creative expression eventually overcame all obstacles. He describes living through the AIDS epidemic, finding the love of his life, and his unorthodox route to becoming a father. He also details his personal encounters with major talents of 1960s comics, such as Steve Ditko (co-creator of Spider-Man), Jim Shooter (writer for DC and later editor-in-chief of Marvel Comics), and Julius Schwartz (legendary architect of the Silver Age of comics).

“Passionate and magnificent! Bill Schelly was one of those integral people responsible for nurturing and growing comic book fandom until the rest of the planet finally began to join us, bringing comic books and superheroes from the subversive to the mainstream. For that, the entire world today owes him its thanks for a job well done!” (Michael Uslan, executive producer of Batman Begins, The Dark Knight, and The Dark Knight Rises)

"The core audience for this memoir of a life in thrall to comics is Schelly’s fellow fans, but his reminiscences of this bygone subculture long before superheroes entered the mainstream warrants a wider readership." (Booklist)

What listeners say about Sense of Wonder

Well told story that held my attention the entire time.

This was a very interesting story about a fan of comics much like myself. Unlike myself this fan took his creativity and self published fanzines, organized massive meetups and wrote biographies of numerous comic creators. You can easily find stories about an artist or writer, people like to see what makes a creator tick. This story helps to flesh out what makes a fan tick.

If th world's nicest person wrote an autobiography, what would it sound like ? Would it be boring, reassuring, sad, optimistic, a horror, a great comfort ? Of COURSE it would ❕ 👍💀