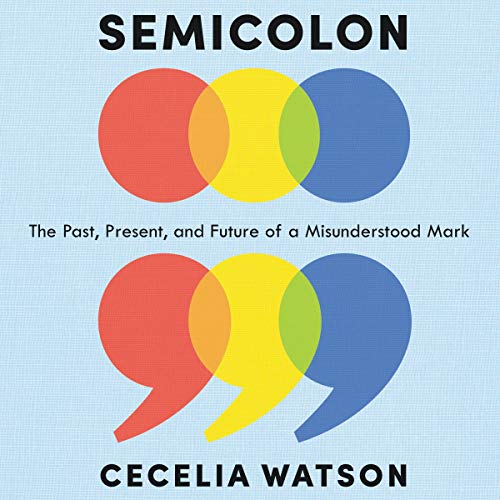 By: Cecelia Watson
Narrated by: Pam Ward
Try for $0.00

A pause-resisting, existential romp through the life and times of the world’s most polarizing punctuation mark.

The semicolon. Stephen King, Hemingway, Vonnegut, and Orwell detest it. Herman Melville, Henry James, and Rebecca Solnit love it. But why? When is it effective? Have we been misusing it? Should we even care?

In Semicolon, Cecelia Watson charts the rise and fall of this infamous punctuation mark, which for years was the trendiest one in the world of letters. But in the 19th century, as grammar books became all the rage, the rules of how we use language became both stricter and more confusing, with the semicolon a prime victim.

Taking us on a breezy journey through a range of examples - from Milton’s manuscripts to Martin Luther King, Jr.’s “Letters from Birmingham Jail” to Raymond Chandler’s The Big Sleep - Watson reveals how traditional grammar rules make us less successful at communicating with each other than we’d think. Even the most die-hard grammar fanatics would be better served by tossing the rule books and learning a better way to engage with language.

Through her rollicking biography of the semicolon, Watson writes a guide to grammar that explains why we don’t need guides at all and refocuses our attention on the deepest, most primary value of language: true communication.

"An audiobook devoted to the semicolon? Unlikely as that might sound, this little history of grammar's most misunderstood punctuation mark is, at just under four hours, brisk, lively, witty, and provocative; it is a genuine pleasure for the ear. Narrator Pam Ward is particularly skilled at rendering topics that might seem narrow, highly specialized, and intended only for a niche market. Her narration is purposeful and expressive, and at the same time unhurried and unforced; in other words, it is a fine artistry of pacing and balance that enlivens without dramatizing. Here, given so many noteworthy authors and fine passages to quote - she simply shines." (AudioFile Magazine)

What listeners say about Semicolon

Silly me; I thought it was about semicolons

This book should be entitled My many marvelous opinions. I think the title of the actual book is misleading.

Let’s hear it for the semicolon; a subtitle

Great research into the life of the semicolon; written with humor and a touch of sarcasm here and there.
Pam Ward did an outstanding job of narration; making a wonderful text come to like.

Why many writers and students deride semicolons

Narration is clear, but I do not appreciate the sarcastic tone.

Nor do I believe that proper use of semicolon is all that difficult to learn or that preoccupation with using correct grammar stanches creativity.

Author’s attitude explains why so many students who have taken English 101 evidence poor writing skills.

This audio is important in that it unflinchingly mocks those of studiously attending to and using this and many other useful punctuation marks.

It is impossible to write a.book about a semicolon but it’s awesome that this lady did it. It was so interesting that l had a hard time putting it down. And now I use it easily. This boo goes beyond setting rules. It helps you understand that you can’t write hampered by rules

As someone who has struggled with a learning disability and has been equally mocked and praised for my punctuation, while never understanding the rules, this book has been a form of vindication! I loved it. It is written clearly while being entertaining for the casual listener. Repositioning punctuation for a contemporary context.