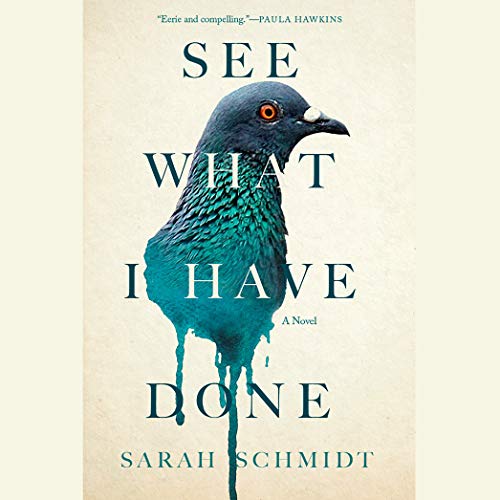 See What I Have Done

Lizzie Borden took an ax
And gave her mother 40 whacks
When she saw what she had done
She gave her father 41.

In this riveting debut novel, See What I Have Done, Sarah Schmidt recasts one of the most fascinating murder cases of all time into an intimate story of a volatile household and a family devoid of love.

On the morning of August 4, 1892, Lizzie Borden calls out to her maid, "Someone's killed Father." The brutal ax murder of Andrew and Abby Borden in their home in Fall River, Massachusetts, leaves little evidence and many unanswered questions. While neighbors struggle to understand why anyone would want to harm the respected Bordens, those close to the family have a different tale to tell - of a father with an explosive temper, a spiteful stepmother, and two spinster sisters, with a bond even stronger than blood, desperate for their independence.

As the police search for clues, Emma comforts an increasingly distraught Lizzie, whose memories of that morning flash in scattered fragments. Had she been in the barn or the pear arbor to escape the stifling heat of the house? When did she last speak to her stepmother? Were they really gone, and would everything be better now? Shifting among the perspectives of the unreliable Lizzie; her older sister, Emma; the housemaid, Bridget; and the enigmatic stranger, Benjamin, the events of that fateful day are slowly revealed through a high-wire feat of storytelling.

What listeners say about See What I Have Done

This story is told from four character's povs. The problem is that the writing style and rhythm barely changed from person to person. Even the narrators had trouble sometimes making the writing sound different from one character to the next. But it is the performances, I think, that saves this, which may be why the audio is getting higher reviews than the book.
Frankly, the story begins to ramble and get down right silly at times, in its theory of what took place. I found myself tuning out or shaking my head while listening.
A caveat: Maybe I am too much of a realist to take this book seriously. I prefer to stick to nonfiction, but this book didn't convince me otherwise.
Beautiful cover art.

I was so looking forward to this one. Narration is boring and the story is so disjointed. Nothing new and fun about it.

I'm not a Lizzie theorist, so I don't know how many times she's been put into fictional context, but this version of her life as an infantilized manipulator got under my skin.

I gave the novel a small demerit for inducing nausea with exquisite detail, and then keeping it up, and up, and up....

Very weird prose. It seems more like a college exercise with odd repetitions and everyone putting macabre things in their mouth. Really hated this story. The acting so so. Not recommended at All.

This book had all the potential of being excellent, but then, when it becomes most interesting, it abruptly stops. What gives ms Schmidt?

Over written and gross

This book is terrible. Over written to the extreme with unnecessary, gross
and crude verbiage.

This is an interesting story, and I really liked the point of view but some of the chapters seemed misplaced or unnecessary. Overalk, I found it engaging but not a must read. Glad to have done the audio version since I really liked the reader.

A haunting interpretation of a century-old mystery

A Shirley Jackson-esque retelling of the Lizzie Borden story.
I'm glad I decided to overlook some unfavorable reviews and buy this book. Sometimes you can tell by reading a poor review that the book will be your cup of tea. That was the case with Sarah Schmidt's take on the New Bedford murders: I couldn't stop listening.
I've read several versions of this story over the years, and this was easily the best. Icing on the cake: pitch-perfect narration.

I couldn't finish listening. Not a fan of the writing style at all. The story line seemed to flow well, but the style in which the story was written just wasn't my taste at all. What seemed to me like random wording such as 'critter critter' and 'the clock on the mantel ticked ticked' were of putting and seemed odd....maybe that's what the author was going for? The narration matched the story and I took no issues with the vocal styles. The style was just not what I expected when I purchased.