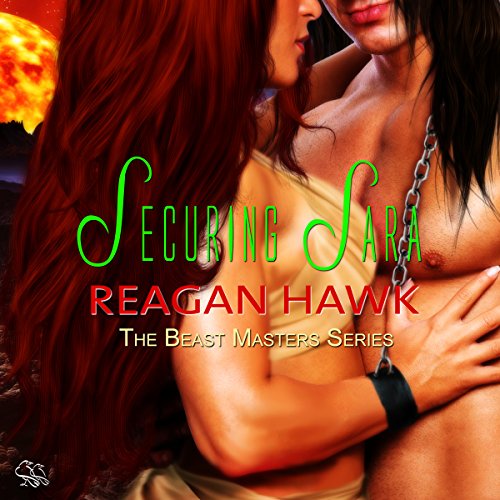 By: Reagan Hawk
Narrated by: Kitty Silver
Try for $0.00

Jaston and Malock were once as close as brothers. War and the scars it left behind changed that. It's not until a woman, charged with a crime, arrives on their planet in need of sanctuary, that they're able to set aside their differences. Problem is, she's not quite as willing to submit as they'd like her to be. In fact, she's as spirited as they come. The males of Ralen are naturally dominant and the need to reproduce is upon them. If they don't do it soon they risk The Heat overtaking them.

Sara isn't one to bend to anyone's whim, let alone two hunky alpha males who want to not only pleasure her but collar her for life as well. She doesn't want to admit she has feelings for both men and worse yet, she wants to submit to them. She wants them to dominate her right into an orgasmic frenzy. Too stubborn to admit as much to them, she finds herself agreeing to live a life of servitude in a House of Pleasure rather than simply stating the truth - she wants them both.

What listeners say about Securing Sara

Oh when a girl can't say no lol

Would you listen to Securing Sara again? Why?

Yes! It was great. It was hot fast past and who wouldn't want two guys fighting over you

I loved them all I couldn't pick one

What does Kitty Silver bring to the story that you wouldn’t experience if you just read the book?

Her voice was great I loved it

I loved the story idea, it's great. I love space and shifters and to add both wow! I love over protective guys to so this is a 3 for 1 story you can't go wrong.

Sara gets her HEA

This is book 2 in the Beast Master series and is a stand alone book with a hot HEA. Sara is a strong will woman but her two mates know what she needs. The narrator tells the story so well. She takes you into their world and heir bedroom. Hope you enjoy it as much as I did. Can’t wait for the next book in the series.

THE NARRATOR IS FEMALE WITH A SEXY ACCENT PERFECT FOR SARA.

Sara was among the prisoners aka slaves facing the men/monsters they'd been told about by the slave traders. She was not going to be collared. She hadn't been able to escape but now they had landed--

Another woman from the ship scuttled that idea. Running meant the shackles would detonate and kill her. Looking at the men they couldn't be worse than death? They sure were gorgeous. But she wasn't some servant or pet to be collared. That's what they did to women. There had to be another option.

Jaston and Maloc, once friends both settled on Sara--they wouldn't force her, but persuading was okay. And she was worth persuading. First, though they have to decide who she would be with--they couldn't agree to share, could they?

An unwilling Sara left few options, ones that would have to be tried. It was more than just wanting to mate--both men needed to mate or face horrible consequences.

I've read and listened to this story and enjoyed it both ways. Read this next feature of the Beast Masters and see if old friends can find a way to save them both and Sara.

Hot shifters on the edge!

Would you listen to Securing Sara again? Why?

What other book might you compare Securing Sara to and why?

Of course the other beast master books, and Dragon Lord series by Michelle Pillow has similar genre and writing style.

Jaston and Malock are both suffering from “the heat” a condition afflicting their race which causes them to lose all humanity and be stuck in beast form (also casing friends or loved ones to hunt down and destroy them), unless they can find their mate. Lucky for them creepy fish men just show up with a load of women to sell, including Sara. Unfortunately for Jaston Sara is not the shrinking violet type and with a fiery temper to rival her hair she rebukes him and Malock both, choosing a life of prostitution out of spite. Of course her resolve crumbles when it hits home what that life would entail! Steamy short with entertaining storyline and amusing characters. Kitty Silver had a great voice, loved the accent, and fit Sara to a T! Not as good with the male characters but enough differentiation to keep it flowing and entertaining!

Jaston and Malak were friends for years. However, ever since the war things had changed. They still work together but there is an barrier between them. They both feel the heat coming on and each know they need a female to bond with soon. Sara has always feared a life of sexual servitude bit now faced with Malak and Jaston that is the path she chooses. She does not want to belong to any man. They take her to the house of pleasure...wanting a chance to change her mind. Will they be to late, will the heat overtake them or will they be able to bond with her? This is a great story. Both the story and the narrator make it a pleasure to listen to.

Where does Securing Sara rank among all the audiobooks you’ve listened to so far?

Ranks even with all of them. They are all outstanding and I would not pick one over the other.

I liked that Sara is full of spirit and does not just submit to the males but instead makes them work for that honor. Beside every strong worthy Alpha male is an Alpha female.. their equal.

Which character – as performed by Kitty Silver – was your favorite?

A hot and steamy listen with enough of a story line to keep you listening i can't wait to listen to the rest of the series. It was just long enough that i could listen to it all in one.