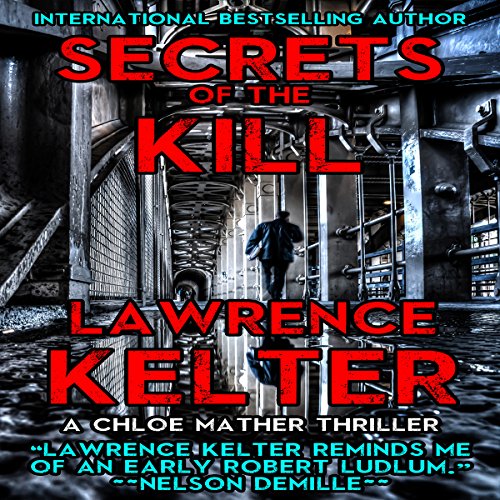 Secrets of the Kill

By: Lawrence Kelter
Narrated by: Caroline Miller
Try for $0.00

Two governments with one objective: to stop the spread of terrorism by any means possible. America and Israel are lifelong allies in an age-old war. To win this battle they will have to sell their souls.

A mutilated body has been discovered - a body not meant to be found. But now that it has, Pandora's box is open and secrets never to be learned have been revealed. An Israeli woman living in New York has been murdered. She has been raped and butchered, an outrage that ignites a fuse that burns all the way back to Tel Aviv.

Enter FBI Agent Chloe Mather, a hard-charging ex-Marine who has no sympathy for the kind of maggot who could commit such a violent atrocity. A veteran of the war in Afghanistan, she was one of the first female Marines to be deployed into an active combat area. She struggles with PTSD and the consequences of a fatherless childhood, yet this is a woman who accepts no pity and operates according to a moral code that is second to none. She'll stop at nothing to find the psychopath responsible for this unspeakable crime.

In Secrets of the Kill, Mather and this code will face the ultimate test. What begins as a challenging homicide becomes much more, and Mather is pulled into an investigation that involves the mob, Israeli intelligence, and a radical terrorist faction. They say that blood is thicker than water. But is it thicker than the bonds of patriotism? Mather will ponder this question and many others as she fights to bring an innocent woman's murderer to justice and prevent a geopolitical atrocity from taking place on American shores.

What listeners say about Secrets of the Kill

First things first, let's get right down to the best thing about this book, and that's the MC Chloe! She is the toughest of the tough, I mean, she is an ex marine!!! How awesome is that!! She takes no prisoners and is definitely one of the toughest heroine I've read in a long time. I always enjoy a book where the female main character is strong.

I'm not going to rehash the summary because I could spoil something so I'll get right to it. This was a fast paced and thrilling read. It has everything you could want in a great read. The characters are all well written and developed, Chloe especially. I loved the dynamics between herself and her partner Dom and they worked really well together.

The plot was really fast paced and intriguing. We have action, suspense, mobsters, politics and a impressive measure of intrigue. This is the type of book that once you start, you have to keep turning the pages to see what happens!!! It's full of twists and turns and with plenty of mystery and secrets, to keep everyone happy and from it's kick ass characters to it's thrilling plot, Secrets of the Kill is a must read.

Caroline Miller made Chloe come alive. She brought Chloes' tough spirit to life which I loved. I found her easy to listen to and will definitely check out more narrated by her.

*I received this for review from AudioBookBlast. All thoughts and opinions are my own.*

Secrets of the Kill

This is the first book I have listened by this author . I look forward to reading all of the others. "Secrets of the Kill" is a great novel that combines several of the best mystery thriller ingredients to create something very original. It's great, enjoy listening to this audiobook..