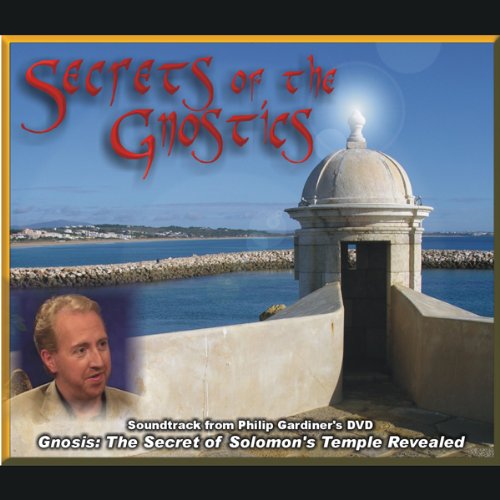 Secrets of the Gnostics

Solomon's Temple in Jerusalem, reputed to be the source of the most esoteric knowledge in human history, has fascinated scholars, seekers, and dreamers for centuries. For generations, scholars and researchers have tried in vain to discover the fabled Temple of Solomon, only to be confronted by one problem after another.

From the Queen of Sheba and the arcane secrets of the Christian Gnostics to the Muslim Sufi and Hindu Avatars,in Secrets of the Gnostics, Philip Gardiner weaves a tale that is both profound and precise. Gardiner declares that the truth of Solomon's Temple has been known all along within the realm of esoteric understanding. Only one question remains: Is the world ready for the truth?

Find the true secret of the Knights Templar and the mysteries of the ancients. Find the truth for yourself in Gnosis. This is the story that has been kept from the ears of mankind for too long. You cannot truly live until you have Gnosis.

What listeners say about Secrets of the Gnostics

I didn't like to music played through the book, it distracted me from the author, which in turn made it hard to understand the book.

The information about the subject, I have since bought 3 of the authors books. I have found it a wealth of knowledge and very illuminating.

Only if it doesn't have the music background. Did not care for it one bit. I choose the book to listen to the narrative not the music (that is not even the kind I like). I found it very distracting and irrevelant to the book.

Who would you have cast as narrator instead of Philip Gardiner?

If you could play editor, what scene or scenes would you have cut from Secrets of the Gnostics?

Is this supposed to be enlightining?

I only listened to the first 20 minutes, and then couldn't stand the incessantly noisy and intrusive music any more.
Is this many truly trying to convey profound spiritual truths while forcing you to listen to the most atrocious and overpowering music?
The topic sounded interesting, although I wondered how one could limit a thorough conversation about something so extensive and far-reaching to less than 60 minutes. Now I know - hash job - stringing loose thoughts together under the guise of insight.
Audible should have an option to exclude people from searches and selections.

And now I have wasted a full credit.

Although short, this book is packed with valuable information for a seeker of truth. I was particularly impressed with the list of source documents pointing to ancient writings and characters. A good reminder of "must read" texts.

Over-produced with loud, bad music. Too many thoughts, no direction; opinions and random thoughts. Don't waste your money or credits.

What was he thinking

Such great material, obviously lots of work gone into finding this knowledge... But never have I been so frustrated an angry listening to a book, at first I thought there must be a malfunction with the recording, but no, it really was rock music that I was expected to listen over, I an dyslexic and there is nothing more frustrating than noise when I want to hear something, especially as I have had an experience which he was talking about. I can not believe the producers went along with this noise while reading a sacred knowledge. Obviously no Gnostics involved or they would see the total incompatibility of vibration while delivering this work. I would love to hear this in silence.. The author is mis guided in combining his two passions. Such a shame....

Very Disappointed in this Book

Has Secret of the Gnostics put you off other books in this genre?

It is obvious that he has no personal understand of that which he is reporting on. It is only a collection of information that he has researched and has presented as facts!

What character would you cut from Secret of the Gnostics?

I don't see how anyone could benefit from this work.
I could not bear to finish it.

Not great, but can be useful

The book shares good teachings, history but seems to lack a "take away"'. The soundtrack choice is at times annoying and poorly chosen. Not your average audiobook, but should work well as an intro to the subject in a short listen.