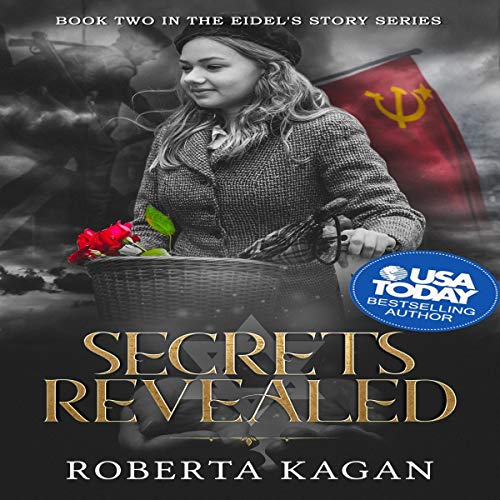 By: Roberta Kagan
Narrated by: Juliet Jones
Try for $0.00

Hitler has surrendered. The Nazi flags, which once hung throughout the city, striking terror in the hearts of Polish citizens, have been torn down. It seems that Warsaw should be rejoicing in its new-found freedom. But Warsaw is not free. Instead it is occupied by the Soviet Union, held tightly in Stalin’s iron grip.

Communist soldiers, in uniform, now control the city. Where once people feared the dreaded swastika, now they tremble at the sight of the hammer and sickle.

It is a treacherous time.

And, in the midst of all of this danger, Ela Dobinski, a girl with a secret that could change her life, is coming of age.

What listeners say about Secrets Revealed

I love that this series continues... Ms Kagan brings these characters to life, and their stories intertwine from generation to generation. Such an easy way to absorb and learn important historical facts about WW2. The narrator is very good - warm and not overwhelming - a consistent and empathetic delivery.

I love all of Roberta Kagan's books, and this one did not disappoint. I was relieved to see Eidel's secrets rising to the surface, and David.... what a man... I'm so delighted that the series continues! The horrors and ramifications of the Nazi occupation must never be forgotten, and Ms Kagan's stories are a wonderful reminder of that.

I am really enjoying the new narrator for these books! She has a soothing and genuine quality, and I find her easy to listen to.

Love the narrator, her inflection is awesome! Beautifully written!

The narrator really brings the story to life, her voice is so easy to listen to. Wonderful story, beautifully narrated.

I enjoy all of her stories! I can't stop listening, these are well read and written.

I don’t like the narrator but getting used to her

I love all RobertaKaran’s books. This one did not disappoint
A lot of interesting facts about Israel I didn’t know. The last few sentences of the book made me so happy