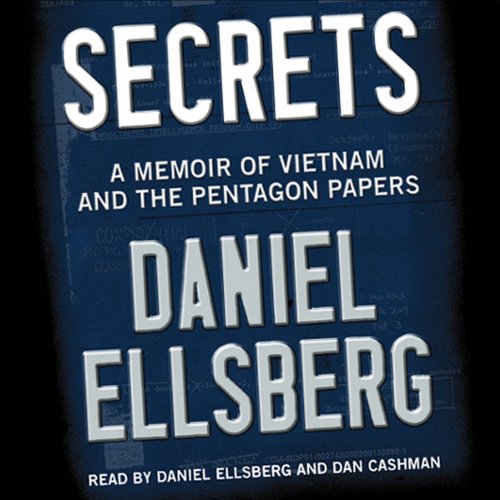 At the height of a spectacular career that spanned four administrations, Daniel Ellsberg chose a new course he believed would land him in prison for the rest of his life. He smuggled out of his office a 7,000 page top-secret study of U.S. decision-making in Vietnam from 1945-1968, and leaked it to The New York Times.

How did the coldest of warriors come to turn against his own government? In Secrets, Ellsberg finally tells the full story.

Ellsberg provides a vivid eyewitness account of the two years he spent behind the lines in Vietnam as a State Department observer, an experience that profoundly altered his own political thinking. And he tells how the release of the Pentagon Papers set in motion a train of events that ultimately toppled a president and helped to end an unjust war.

Infused with the political passion and turmoil of the Vietnam era, Secrets is the memoir of a daring man, a story about what it takes to make a dramatic life-change in the context of moral challenge, an expose of Washington power politics, and a searing portrait of America at a perilous modern crossroads.

"A remarkable and riveting story." (Publishers Weekly)
"The story is fascinating, and one that anyone interested in Vietnam should hear. Ellsberg has a gruff voice, and he gives a true measure of himself as he reads his story." (AudioFile)
"Ellsberg's deft critique of secrecy in government is an invaluable contribution to understanding one of our nation's darkest hours." (San Francisco Chronicle)

What listeners say about Secrets

This book is engrossing. Even at this far removed distance in time, and despite of all we know about it, the details of this story are shocking. The presentation is impassioned and at the same time matter of fact and direct about the decades of presidential deception on Vietnam. E.g., Elsberg is listening to a President Johnson speech and notes his reaction and details the lies LBJ told in it. Four presidents lied about Vietnam. All of the four ignored the best advice from the military advisors on what it would take to "win": all the presidents did less but hoped that what they did would bring a resolution to the conflict. An excellent narrator, perfect for this book, Dan Cashman. The introduction and some of the chapters are narrated by the 70-something Daniel Ellsberg. It's a winner.

I agree completely with the previous review. The information is fantastic. As a gen X'er, I am a little young to have real knowledge of what was going on in LBJ, Nixon, Vietnam era. At first I thought the switch between Ellsberg as reader and the other reader, which happens several times, distracting, but as the book progressed I appreciated hearing some of it from the authors own lips. The other reader is very good. I really liked this book. I felt by the end that I had a good mental picture of what was going on in Vietnam, what the issues were, and why we ended up in such a mess.

I was 9 years old when this started to unfold. It was never a topic they talked about in school - ever. And I sure feel like I, and the rest of the nation, lost out on an unparalleled educational opportunity. The entire exercise begs an ongoing debate over who broke the laws/rules in the best interest of the country.

The story, though read with a general sobriety, was nonetheless filled with moments of intensity - exactly what you'd hope for when hearing the story of someone knowingly breaking the law and throwing his career away in order to tell the American people what the "deciders" in government knew about Vietnam, and deliberately ignored, in its arrogant zeal to, well...., just in its zeal.

Insight to Vietnam War and US policies

Heading to Vietnam, I wanted to find a book that covered US politics in the region, some history, the Pentagon Papers if possible and anything else that might be of interest. I was lucky to find this book, because it covers all of these topics in intense detail. It's worth reading twice. And there are no other books on Audible at this time that cover this topic with such critical insight. Aside from the strange ding-dong chapter introductions, everything else is very good, including the narration. This author sounds great reading his own work- a rarity.

This book is also very interesting because Ellsberg discusses in great detail how he changed from a Cold Warrior to a Progressive person who learned over many years how to think for himself. He goes into exceptional detail about the Gulf of Tonkin, to which he was privy to Top Secret memos at the time of the supposed attacks.

This is a must-read for anyone who is interested in the Vietnam War, the US government's involvement and the many US administrations that kept the war going, and why.

This is one of the most thrilling true stories I've ever read. Mr. Ellsberg is an amazingly intelligent man and an exceptional writer. The oscillating narration between Mr. Ellsberg and Dan Cashman doesn't in anyway diminish the experience of the listen. They both do an outstanding job, so if you've never picked this book up do yourself a favor and download it.

Essential Reading for All Americans

Daniel Ellsberg is an American hero. This is his fascinating, at times thrilling autobiography. It’s the story of a brilliant man dedicated to traditional patriotic values. He was councilor to the very highest government officials running the Vietnam war. He was a trusted advisor to Robert McNamara, Secretary of Defense, and the man thought to be most responsible for the continuance and escalation of the war. But, when Ellsberg realized the war was unwinable and both McNamara and President Johnson new it his conscience wouldn’t let him remain silent. This he plotted to release the most secret and devastating documents to alert congress and the American people the were murdering thousands of human beings for no reason than to save face. These became known as “The Pentagon Papers” and they made Ellsberg the most wanted man in the Country.

This is an important and timely memoir (and the subject of the hit movie, The Post. It is personal yet written like an exciting spy novel. I highly recommend it!

There was an awful lot here that I didn't know

Where does Secrets rank among all the audiobooks you’ve listened to so far?

I lived through this era (young, but present & alert) and didn't know lots of what the Pentagon Papers were about, and what their attempted suppression led to. Very impressive narrative of an individual's self-endangerment for an intentional & noble purpose.

of the Pentagon Papers case, from the guy who leaked them. Reads like a novel.