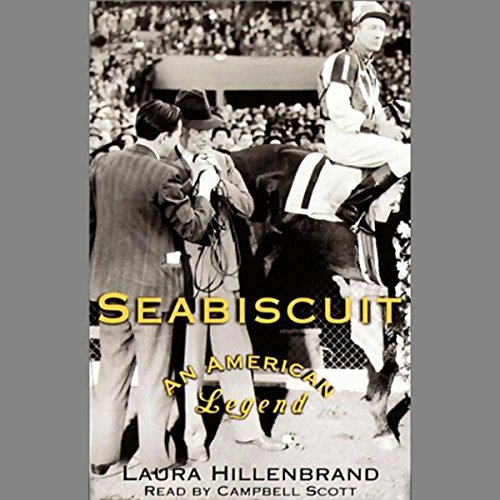 By: Laura Hillenbrand
Narrated by: Campbell Scott
Try for $0.00

From the author of the runaway phenomenon Unbroken comes a universal underdog story about the horse who came out of nowhere to become a legend.

Seabiscuit was one of the most electrifying and popular attractions in sports history and the single biggest newsmaker in the world in 1938, receiving more coverage than FDR, Hitler, or Mussolini. But his success was a surprise to the racing establishment, which had written off the crooked-legged racehorse with the sad tail. Three men changed Seabiscuit’s fortunes:

Charles Howard was a onetime bicycle repairman who introduced the automobile to the western United States and became an overnight millionaire. When he needed a trainer for his new racehorses, he hired Tom Smith, a mysterious mustang breaker from the Colorado plains. Smith urged Howard to buy Seabiscuit for a bargain-basement price, then hired as his jockey Red Pollard, a failed boxer who was blind in one eye, half-crippled, and prone to quoting passages from Ralph Waldo Emerson. Over four years, these unlikely partners survived a phenomenal run of bad fortune, conspiracy, and severe injury to transform Seabiscuit from a neurotic, pathologically indolent also-ran into an American sports icon.

“Fascinating.... Vivid.... A first-rate piece of storytelling, leaving us not only with a vivid portrait of a horse but a fascinating slice of American history as well.” (The New York Times)

“Engrossing.... Fast-moving.... More than just a horse’s tale, because the humans who owned, trained, and rode Seabiscuit are equally fascinating.... [Laura Hillenbrand] shows an extraordinary talent for describing a horse race so vividly that the reader feels like the rider.” (Sports Illustrated)

"Campbell Scott never overplays a line, never misses a pause, never fails to punch an ending. This is a treat for the ear, an education for the mind, and a meal for the soul." (AudioFile)

“Fascinating... Vivid... A first-rate piece of storytelling, leaving us not only with a vivid portrait of a horse but a fascinating slice of American history as well.” (The New York Times)

“Engrossing... Fast-moving... More than just a horse’s tale, because the humans who owned, trained, and rode Seabiscuit are equally fascinating.... [Hillenbrand] shows an extraordinary talent for describing a horse race so vividly that the reader feels like the rider.” (Sports Illustrated)

“Remarkable... Memorable... Just as compelling today as it was in 1938.” (The Washington Post)

What listeners say about Seabiscuit

I wanted to listen to this unabridged - everyone was raving about it - and finally I succumbed to the abridged version offered by Audible. I like Campbell Scott as a narrator, but felt like I was hearing a bookjacket as he read through one obvious hokey abridged plot point after another, with transitions like, "It took ten years to bring these two together...." and finally I switched it off. I then saw the movie, which was great, but now everyone says the book was so much better - the UNABRIDGED book. I'm off to read it in bits and snatches of spare time, since unfortunately it is still not available here unabridged. This is the LAST abridged audio I will ever buy.

One For The Roses

This was my favorite book of 2002. The story is amazing. You couldn't write better fiction than this true-life tale. Each of the characters; horse, jockey, trainer, and owner all provide heroic tales in their own respect. The author does such an incredible job describing the racing action that you can almost feel the ground rumble as the horses pound their way down the home stretch. The narration is also excellent, and this adds to the excitement. Before reading this book, I had never been to a horse race but after reading it, I had to go to the races just so I could experience it firsthand. Don't wait for the movie, this is a great book!

Tsk Tsk! Not only is this ABRIDGED, but the narration is pedestrian.

This is a terrific story, wonderfully written and narrated, and I loved every minute of listening to it. In fact I couldn't stop listening. My only complaint is that it was an abridged version. I wanted more, lots more. But don't wait for the unabridged version which may never be available or you'll miss one of the best stories ever.

Will Keep you Riveted

I knew nothing about horse racing when I first started on this book. But it doesnt' really matter - it's more of a story about personalities and a wonderful, gutsy horse. I was also rather astounded to learn the impact horse racing had on the general public in the late 30's. The Superbowl of the period. A great intro to audio books if you haven't listened to one yet. I agree with the one reviewer that it would be nice to see an unabridged version, as I heard in an interview with Laura Hillenbrand that only about 30% of the book is contained in the abridged version. Still, the narration is excellent, you will have tears in your eyes and you will be inspired to read the full book and see the movie this summer. Don't pass this one up!

Want to see the movie

Thrilling story with a snappy prose

The abridged version of this book was satisfactory. Although Seabiscuit won nearly half of the races he started, this reading covered only the sensational ones. It read with poise keeping me attentive during the many play-by-play accounts. Throughout the rest of the audio there was plenty of cast-off detail about the men around Seabiscuit to make me cheer their triumphs too. This audio was well-read and inspirational.

Living in Sartoga and having worked at the track where much of the movie was filmed, I was anxious to listen to this book, assuming I could do so with a very critical ear. I have nothing but good things to say about it. It was a very interesting story on life in the racing world and the hard work of a horse with a will to win and the unlikely group of men who made it happen. It brought back fond memories of the sights and sounds and smells that make up the backstretch of any track. Begin it and you too will "race" through the chapters.

Seabiscuit the book was a

Frankly I enjoyed the movie (seen after I listened to the book) more; how many races can one hear described in detail without losing interest? For once, I think an abridged version would have been an improvement for listeners, if not readers. jg

Simply captivating. One of the best books I've read/listened to in the last five years. I read it before it became a national obsession and recommended it to lots of people. I agree with some reviewers that the unabridged version might be better, but this was awfully good.