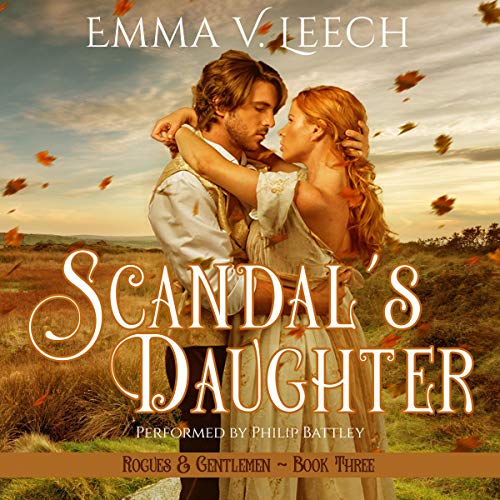 Sebastian Grenville, the duke of Sindalton, known as Sin to the ton, has had his fair share of scandal. His father's involvement in what became referred to as "The Scandal of the Century" plunged him into the spotlight at the tender age of 12, and he's been there ever since. Egged on by his best friend, Beau - the marquis of Beaumont - his life is one of dissipation and ease. But every duke needs an heir, and everyone knows Sindalton is on the market for a wife.

Both men, bored to death by balls and matchmaking mamas, go to a friend's hunting lodge in Cornwall. But caught in a storm, Sindalton heads for cover. Seeking shelter in a cave, the duke is delighted when he stumbles upon Miss Georgiana Bomford, the niece of the local doctor. But the feisty, redheaded beauty is unimpressed by his attempt to entice her. Sindalton, however, is captivated and intent on seduction and makes her the target of his all-too-tempting charms.

But Georgiana is not who he thinks she is, and when they meet again in London, the scandalous past is in danger of repeating itself.

What listeners say about Scandal's Daughter

I can't say enough about this series. I think it's as good as the maiden Lane series, but with less love scenes. This just gives the author more time to develop an interesting plot.
The H/H are endearing and the secondary characters really round out the story. This novel sets up Beau and Percy for their own stories later in the series.
The reason I am starting to love Emma Leech, is that there is not the usual miscommunication between the H/H...or just a little to ensure there is tension . The miscommunication never goes on for long and is not the driver of the plot. There is a villan that gets his just desserts and enough drama to make the story a page turner.
The narrator is excellent and has fast become one of my favorites. He does the male voices in a way that makes me melt...why can't all men talk like this in real life?!? I am always looking for more books by this narrator, but he must be new, as there is only a few.
This team of author/narrator can't be beat. I can't waint for the next one in the series. Book 6 & 7 are already available, so hopefully 4 & 5 will be out soon.

**Review's for books 1-10**
Narrator did a very good job giving life to all character's and distinguishing them.

Book 1- Very good story kept me riveted and engaged from start to finish and looking forward to more.
Book 2- Same as the first.
Book 3- Really loved this tale over the 1st and 2nd.
Book 4- So far this one is my most favorite amongst the 10 I've read. I absolutely adored Beau and Millie.
Book 5- This is where thing's start going south for me. I just loved Aubrey in the previous books but he was too young and submissive for my taste in this one. The whole story lacked EVERYTHING it's previous stories did. I also didn't like Violette.
Book 6- Was a chore and found Edward and Belle a bit boring and more wanting to know more about Clercy instead.
Book 7- Here's where I really get upset! Half or more of this book I had already read in book 6!! This is a huge pet peeve of mine when author's do this because we're not getting a FULL fresh book at all but still paying for something we've already bought!! UGH!! This story was beyond ridiculous also and I truly hated it. It left me mad and upset.  Gabriel was such a weak "hero" that I laugh at even thinking him to be considered one. He's actually the opposite of a hero. Clercy was portrayed too perfect and accepting, which I was expecting to see more, even a damn ghost or two but NADA!! Although I appreciated her blunt approach, she's just far too young and inexperienced to be so "perfect " which made this entire story just too far fetched and unbelievable.
Book 8- Again, another submissive Male which is a turn off and a female that's unremarkable. Predictable tale with nothing new.
Book 9- I enjoyed this one and hoped that the author found her lost mojo of bringing back the joy I found in the first few of the series.
Book 10- I was wrong because this was yet again a huge disappointment. I will stop here and save my money and time on finding another author.

Fighting for a chance at forever

Loved the book and characters. Sebastian is still bothered from the scandal his father committed almost 20 yrs ago. When he goes to the country with Bo he meets a beautiful young woman Georgiana Bomford but tells her he is Bo instead of a Duke. They fall in love but know nothing can come of it. She finds out her true identity from a cruel uncle who only wants her fortune.
When she goes to London for her come out she meets the real Bo and is devastated she was lied to. When she comes face to face with the fake Bo she finds out not only is he a Duke but he is the son of the man who killed her father and her mother ran off with when the died. Can these 2 find common ground before the real Bo steps in. A wonderful story with a great ending.

I got confused who the hero was!

I absolutely loved the book before this, but really found this book confusing!! It felt like the initial love story was done and dusted at the beginning of the book and then the author spent several chapters writing more about another contender for the ladies heart. Indeed I began to get confused as to who exactly she was falling in love with!! Messy writing but great narration.

Third book in the series, really enjoyed this and will definitely have the next story. Have loved the narration and the story is lovely,