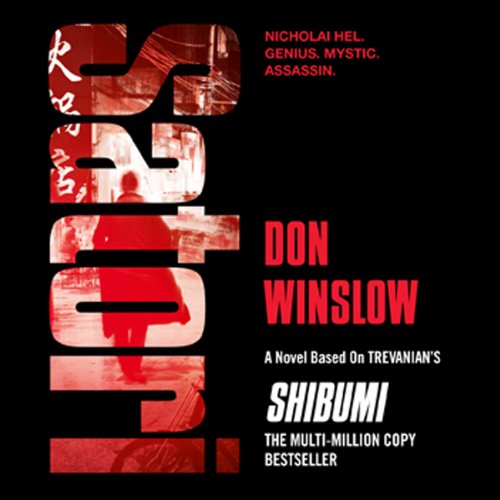 By: Don Winslow,Trevanian
Narrated by: Holter Graham
Try for $0.00

Japan 1951. After spending the last three years in solitary confinement for the murder of his mentor, Nicholai Hel is offered the chance of freedom - but at a price. Overseen by his American spymaster and the beautiful and mysterious Solange, he must travel to China and assassinate the Soviet Union's commissioner. In a landscape primed for war this is a suicide mission he has no choice but to accept. From the glittering corruption of Beijing to the darkest shadows of the Vietnam jungle, his mission will sweep him through a world of chaos, violence and betrayal.

"Written with a panache that Fleming would have admired." ( Daily Mail)
"Elegant writing, a mature confident narrative and characters so real you can almost touch them...will satisfy even the most discriminating action reader." (David Baldacci)
"Exhilarating" ( LA Times)

What listeners say about Satori

loved every minute of it,gripping story

first ever audio book, now looking forward to my next one, gripping experience relaxing entertainment

Although I liked the old school 'cowboy comes into town and sets all the rival gangs on eachother plot' that's all it was.

Shibumi was a very special story and Hel a very special character. Although I laboured through the whole of Satori there were so many key mistakes (I remember Naked Killl being the art of using thousands of readily available everyday objects to kill, not mystic leopard paw chi...?) And although I am aware that Winslow was portraying a younger Hel, Trevanian had already done that... Winslow did not have the same grasp on the Asian culture and mind that Trevanian did, so he turned Hel into the westerner Michelle to cover for that.

And the dodgy accents...! The heroine went through Russian, French trans and a few others in the space of a few chapters... Hel sounded like a spoiled American child and the Vietnamese stereotype could not have been done better by the team that brought us Team America!

My opinion is that Satori is fan fiction with a budget. I personally don't feel it to be the true story of Nicolai Hel and that the prequel is still fair game for another writer to take on.

Saying that, I will be reading the book to see if the narration coloured my experience.

what a beautiful capturing of Trevanian writing by Winslow.
I recommend this to anyone seeking a continuation of Shibumi

Enjoyable addition to ‘Shibumi’ by Trevanian

Enjoyed this book however became frustratingly annoyed with the many 50-100 word chapters within ‘Satori’.