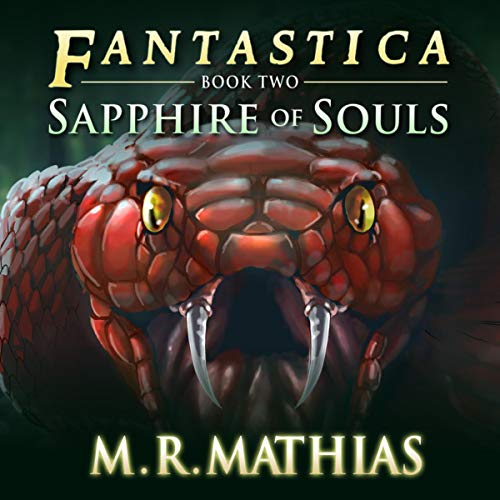 Ragged and weary from their previous ordeals, Braxton and his motley crew of elves, dwarves, and humans, set off into the wilderkind forest in search of the sapphire of souls. The problem is, the last time anyone saw the powerful gem was over a hundred years ago when a wood dragon ate the elf who was carrying it.

With the necromancer Reaton-Stav forcing his animated corpses to wreak havoc at every turn, and the demon Pharark using the giant gothicans and trolls to invade Narvoza, the future of the realm hangs in the balance.

Can our heroes find and destroy the sapphire before Pharark can use its power to bring the kingdom to its knees? Will the necromancer who covets Braxton's medallion find a way to stop them? Does the love Nixy and Braxton share for each other even stand a chance in the brutal world they've found themselves in? There is only one way to find out.

Step into the world of Fantastica.

What listeners say about Sapphire of Souls

An excellent addition to the series.

I have been a big of M. R. Mathias for quite some time. He is one of the pioneers of the indie publishing scene, and its really amazing to see that variety of stories and series he's written since his first book over a decade ago. Fantastica is a worthy addition to his portfolio of series, with broad appeal.

The story picks up with Braxton and his companion, the mercenary Nixy, surviving their sea journey in search of the Sapphire of Souls, the weapon that will hopefully help them defeat the powerful demon Pharark. Joining them are are a sorceress, several elven hunters, and two dwarves, one of whom is crown prince, and they are all determined to help save the kingdom of Narvosa from Pharark and his pawn, the necromancer Reaton-Stav. The problem with finding the Sapphire is that its been missing for a 100 years since the elf carrying it was eaten by a dragon, who then flew off.

Proceeding through the Wilderkin, the wild forest area they must traverse to try and find the jewel, the group is in a race with the wood trolls controlled by Pharark to discover the hiding place of the jewel. The situation gets even more tense when Braxton is thought lost when the group is attacked by a giant serpent, and ends up separated some distance from the group. This turns out to be a blessing in disguise, since Braxton ends up meeting a young girl with a magical amulet similar to his, allowing her to access the void and use magic as well. Traveling with an old dragon named Emerald they've met, they must try and reunite with their friends, while trying to get another weapon, Bloodstone, that can harm Pharark.

As the two parties get closer to their final goals, their enemies aren't idle. Pharark has more Trolls and the giant Gothicans trying to attack Narvosa through their neighboring kingdom, and Reaton-Stav is trying to create an army of the dead while he tries to get a spell book that will increase his power immensely. These disparate threads come together later in a climactic clash that has repercussions for the greater world, with the results leaving both sides more determined than ever that they are on the path to victory, with only time telling whose vision will win out.

Like the first book in the series, this book is very character driven. The author does an excellent job creating characters that are sympathetic while being strong and determined to do whats right, as far as the protagonists go, and creates some truly villainous antagonists that you can really loath. Braxton is kind of a traditional hero on the hero's journey, so he does have struggles and failures along the way. The other characters are given attention as well, expanding their stories to draw the reader into their lives. The villains are pretty much irredeemable evil villains, but are powerful enough that they have to be seen as a threat to the world.

The world building, as I've come to expect from this author, is excellent. You really get a solid feel for the world he has created, and it tends to draw you right into the action. It is a high magic realm, so you get your fair share of fireballs and other magic flying around. The settings are top notch, and are so well described you fell like you're walking the paths through the forest and down the halls of the castles. It's pretty much a hallmark of this author's writing.

The narration is handled by William Hahn. He has a big, deep voice, so his narration reflects that, really jumping out of the speakers at you. He does a good job creating different voices for each of the characters, and his narrative pacing is good, moving the story along at a nice clip. I look forward to hearing him narrate the rest of the series.

With a writer as experienced as M.R. Mathias, I had no doubts the book would be a polished, enjoyable story that avoided being a cliche of a fantasy novel. I was correct, and what we got was a well rounded story that should appeal to a wide range of fantasy fans. I am really looking forward to reading the rest of this series to see how it ends.

I really found this tale to be fantastic, full of grand adventures with a touch of love and magic. They’re creating new friends everywhere.