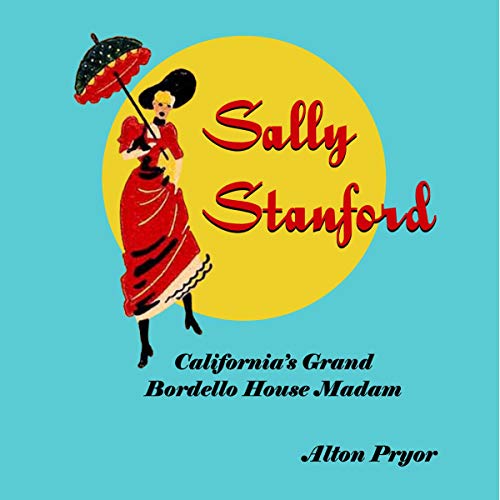 By: Alton Pryor
Narrated by: Curt Troutwine
Try for $0.00

Sally Stanford was a bawdy house madam like no other. She put her houses of prostitution in the most upscale area of San Francisco and charged her customers accordingly. She paid her girls the top wages of the industry and helped them deal with their problems along the way. Sally didn't hesitate to fight the powers that be in city hall and other branches of government.

What listeners say about Sally Stanford

I received this title for free from the author.

The title of Sally Stanford is a bit misleading: the first half of the book focuses on Sally Stanford while the rest is composed of other stories of madams in California and the Midwest.

I found this title enjoyable enough, but don’t go in expecting a full biography of Sally Stanford; it’s more small humorous or interesting episodes in the woman’s life. Chapters are short: only about 2-5 minutes each, and they tend to end rather abruptly (in my opinion anyway).

The content, despite the short bursts its divided into, was pretty interesting. I never heard of Sally Stanford before, so hearing the goings on of a 20th century madam (brothel owner) was novel. The book leans heavily on Sally’s own autobiography (as to be expected), which might be a double edged sword; I’m not entirely sure how much of the material is just summarizing parts of the book or how much research outside of Sally’s autobiography was done. Curt Troutwine’s narration was superb, and really fit in with the material.

I like the info that’s in the book, it’s just how it’s organized that puts me off. It feels sort of disjointed. There is no coda to Sally’s story; one chapter it’s talking about Sally, the next it jumps a century in the past to the early prostitution business in San Francisco. There’s some connective tissue missing there, and I feel that a restructuring of the order of events (perhaps chronologically) would have suited the book better. A light read on rather racy material, but could have been better.

It’s actually only about ½ about Sally Stanford. Then, it goes into a litany of about 6-8 other madams. Interesting history, but it reads like a book report.

- Please note that I’m not a huge non-fiction fan, so I tend to get nitpicky.

- Not sure why the title centers in on Sally when the second half is about other people. It’s slightly misleading. Should have been something like Sally Stanford and other Dynamic Bordello House Madams that Shaped the West (or something like that).

- The author is 110% on the side of the House Madams and vilifies the somewhat corrupt committees that tried time and again to shut them down.

- I’m totally blanking on Sally Stanford’s real name now, but it was interesting to see how she chose her new name.

If you’re up for learning more about a slightly shady side of history, this worth checking out.

*I received a free copy; I chose to review it. All points are my own.

This was a very interesting historical telling of a Madams life.It was too short in my opinion. Curt Troutwire was an ok narrator.His telling was fastmoving and clipped.A bit more life put into the tale would be nice.
I was given this book by the narrator,author or publisher free for an honest review.

Interesting, but too hasty

* I was given a copy of this book with the understanding that I'd provide a fair and honest review. *

Title this A Brief History of Madam's of the American Old West and then you'd be approaching something that more accurately describes the contents of Sally Stanford: California's Grand Bordello House Madam.

This rushes through everything, passing from one topic to the next without segue, and often ending abruptly without a satisfying resolution...heck, without any resolution in some cases. The nuggets of detail given about the women (sometimes legends and tall-tales) tantalize and entertain, however, it's all just far too hasty.

The narration for the audiobook version by Curt Troutwine is solid. He's got an enjoyably smooth voice that makes history go down like butter.

This book was an interesting account of first one specific bordello and the life of Sally Stanford. The remaining one-third was more of an anthology of bordellos and the politics surrounding them in early America. I found the narration comfortable and an easy listen. This book was provided free for a honest review.

Hey, I really enjoyed this little book! It's very short and pulls a lot of information about Sally from her own published memoirs about her businesses in San Francisco and elsewhere in the from Prohibition to post WW2. About the last third of the book is comprised of the stories of other Parlor House Madams in the mid to late nineteenth century. It all sounded so much more voluntary and safer than for the women I tended in inner city hospital and jail in the late twentieth century.
Curt Troutwine provides an excellent narration!
I won a free audio copy in a giveaway! I win!

This is a great book! The narration is easy to listen to, and the story in intensely interesting. There is a lot of history, bootlegging and all sorts of colorful history. I read a lot 1-2 books a week. This is an easy book to pick up randomly and start reading, as every bit is engaging.

The title of this book seems to indicate that this will be entirely about Sally Stanford. However, this is not the case - it starts with Sally but then continues with various other Madams [each getting a brief chapter]. The book itself felt more like a brochure of the highlights of the lives of these women than any kind of in-depth exploration of how these women became Madams, how they ran their houses and became successful, how they dealt with the societal condemnation of their trade, etc. While the women chosen to be in the book seemed interesting, it just felt too cursory.

The narrator did a good job.

The thrust of the first portion of the book is a simple introduction into the life of one of San Francisco's more famous madames. It is merely a short summary of the more interesting events, capers, escapades, and folk-wisdom of the proud lady that was always one step ahead of her competitors, nosy neighbors, and snooping coppers. Broken down into easy to swallow morsels, it reminds one of the script of a tour guide whose job is not to get too deep into opinion or politics and not tangled up in attempting any sweeping historical narratives of the time or the causes and effects of vice but to just leave the tourists tantalized and delighted to be let in on the dark and dirty secrets of what happens behind those closed velvet drapes.

The second portion of the book less satisfactorily deals with a hodge-podge of other famous boom-town bordellos throughout history with their "classy" madames, "sassy" prostitutes and "high-class" gentlemen that made them.

It is a light read and doesn't really have an overall story to it but it is informative about California's Madames of the 1930's. I received this audiobook as a re Jew copy for free in exchange for an honest review.

An interesting piece of history

This was an interesting look into the history of Sally Stanford and various other prostitutes with lots of crime and dodgy dealings going on throughout. It was very eye opening into how this type of 'business' was run and was a good in depth look into Sally Stanford's life and a few other areas of prostitution also.

The narration was clear and well read, it wasn't monotonous at all and suited the 'documentary' style of the subject.