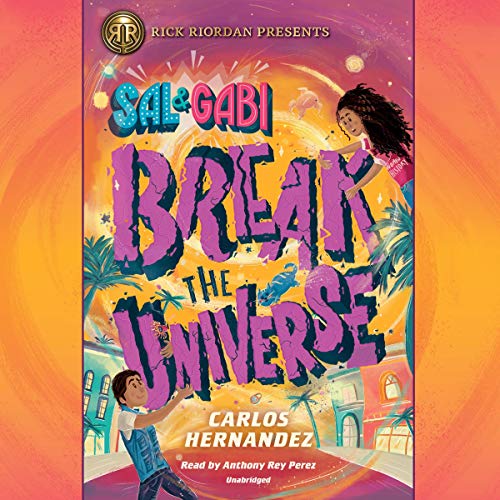 Sal and Gabi Break the Universe

By: Carlos Hernandez
Narrated by: Anthony Rey Perez
Try for $0.00

Rick Riordan presents a brilliant sci-fi romp with Cuban influence that poses this question: What would you do if you had the power to reach through time and space and retrieve anything you want, including your mother, who is no longer living (in this universe, anyway)?

In order to heal after his mother's death, Sal learned how to meditate. But no one expected him to be able to take it further and "relax" things into existence. Turns out he can reach into time and space to retrieve things from other universes - even his mom! He has promised his dad and stepmom that he won't bring back his mother anymore (it causes a lot of marital tension), but sometimes, he can't help himself. Why can't they all just get along?

Sal doesn't talk about his ability with anyone. At Culeco, his performing arts middle school, he just chalks it up to being a magician. But when he meets Gabi, the student council president and editor of the school paper, he realizes she is someone with whom he can work. She could use his help, too, because she has a newborn brother on life support.

But just because Sal and Gabi can do some interesting things to improve lives, does that mean they should? When things get out of hand, it's going to require some truly out-of-the-box thinking to set things right.

What listeners say about Sal and Gabi Break the Universe

If You Love Juvenile Fiction You Must Listen!

If I could give this book ten stars, I would! I am a huge fan of Juvenile Fiction. I think I've listened to all of Rick Riordan's series and now all of "Rick Riordan Presents." I wasn't in a hurry to download this one, because it seemed to be more science fiction than based in the cultural mythologies.
I am absolutely blown away!
Hernandez may have dethroned Riordan as my favorite JF writer!
Sal, the main character, narrates. He is absolutely hilarious! He's also very intelligent emotionally. He shows kindness and compassion. He has a beautiful family, but he's also known tragedy, so he has so much depth for a middle school kid. But it's not unbelievable. You'll laugh and cry and cheer.
There isn't enough room here nor enough words for me to tell you how much you need to hear this book. The narrator, Anthony Rey Perez, gives it just the right Latinx flair! I hope there will be more.

Not just for assimilated middle schoolers!

Full disclosure: The author is married to my daughter. So whatever else happens, the story has a happy beginning and ending. I look forward to reading whatever they are writing, and being introduced to their work and that of their friends is for me like waking up in another universe: unfamiliar, yes; unsettling, perhaps; but eye-popping and dream-inspiring, radiating hope from even the most dystopian page.

Now Carlos has brought us into the lives of these clever cubanit@s and their parents who seem (mostly) normal yet who broadcast both the alien presence and familiarity of their paternidad so that we read it from inside their offspring. A whole generation of geeky gringo readers from seven to (my age) and beyond will find themselves working “culeco” and “caca seca” into their conversations with friends.

“Sal and Gabi” is a story about death and loss told so compassionately through the gentle interventions of creative and kind people of all ages that you almost miss the primer in quantum and catastrophe physics! There is enough magic and fun in the mix that you never stop to ask yourself where in the multiverse this alternate world might be that has a Miami and a Connecticut in it where there’s no racism or bullying or judging, and people feed hungry, abused kids with plates of ropa and fried yucca and treat them with respect and love. As e e cummings said at the end of a sonnet, “listen: there’s a hell of a good universe next door; let’s go”. Sal and Gabi and their parents and friends can take us there, and the children shall lead them.

A unique and unexpected story for all ages.

The characters are vibrant and tangible, the story is unpredictable and uplifting. I absolutely loved the Cuban flavor. ¡Delicioso!

The story comes from the heart. you can tell the writer both loved and respected the creation. The story flowed evenly without needless rambling. The way the language moved through Spanish and English was clear and understandable. the science feels so real one could believe it was true.

Made me laugh, made me cry. binged it in a day. I highly recommend this book.

Not for my girls, but I sort enjoyed it as a mom.

I didn't finish it because my 8 & 12 year old girls didn't like listening to it.

i loved every bit of it! it's great for any age imo. lots of pertinent themes.

...when I was a kid. The writing, creativity and performance all amazing! Can’t wait for the next book!! Please get part 2 on audio ASAP!

Loved every caca seca reference. The characters were so easy to root for. Amazing dialogue.

One of the best books I have read in a long time.

This book is all of this and more.

You should definitely read this book.