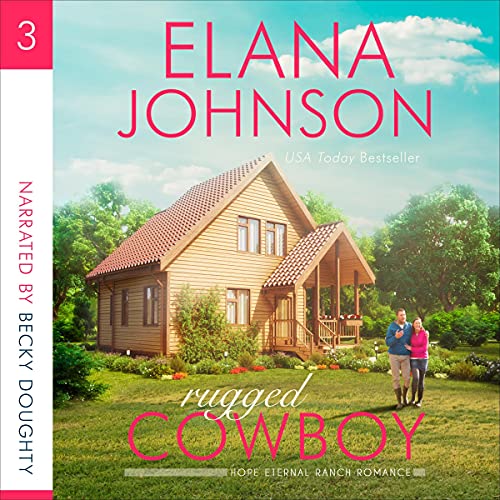 By: Elana Johnson
Narrated by: Becky Doughty
Try for $0.00

He's a cowboy mechanic with two kids and an ex-wife on the run. She connects better to horses than humans. Can Dallas and Jess find their way to each other at Hope Eternal Ranch?

Dallas Dreyer was once a decorated surgeon. After getting involved in insurance fraud and then spending 30 months in a low-security facility, he gets released only to learn his wife of f15 years has left their two children at her sister's and fled the state. He's determined to figure out how to be a single dad and do right by his kids, and he goes to Hope Eternal Ranch to attend the wedding of one of his best friends.

He meets Jessica Morales, the stable master at the ranch, and he's instantly attracted to her. She has a big heart, a wide smile, and she's great with his kids. Jess likes him too, but she's wary of the rugged cowboy mechanic who doesn't seem to know when it's okay to take calls from his ex-wife and how to juggle all of his new responsibilities. Her horses, though, she gets, and since she's never had a relationship that's lasted longer than two months, she's not sure she wants to take a chance with her heart.

When Dallas finds himself dealing with thugs who want him to pay off his ex-wife's debt, he has to make difficult decisions to keep himself, his children, and Jess safe. That means dealing with his ex-wife and paying whatever price necessary to get dangerous men away from Hope Eternal Ranch.

Can Jess be patient with Dallas while he deals with so much? Or will the family she's started to build with him and his children disintegrate right before her eyes?

Cowboys looking for a second chance at life, love, and happiness.

What listeners say about Rugged Cowboy