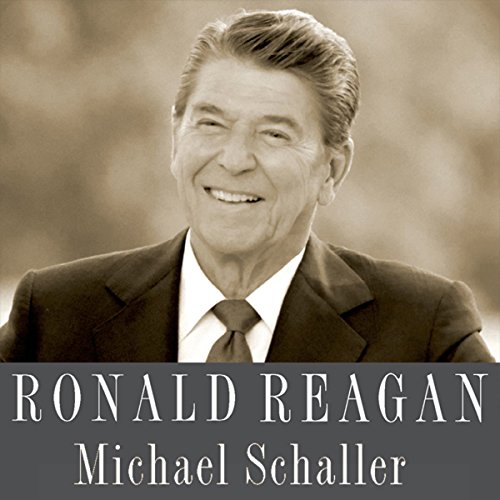 By: Michael Schaller
Narrated by: Joe Barrett
Try for $0.00

In this short biography, Michael Schaller, acclaimed historian of the American political right, offers readers a poignant account of Ronald Reagan's life and achievements, from his small-town upbringing in rural Illinois to his cinematic success in Hollywood, entry into politics as governor of California, and meteoric rise to the White House, where he served for eight years.

The polarizing Great Communicator oversaw many developments that changed the face of American politics and life - the Iran-Contra Affair, the establishment of "Reaganomics", the largest military buildup in peacetime US history - and as such remains a figure about whom much is written and much has yet to be discovered. Schaller revisits each of these episodes during and leading up to the Reagan presidency, taking into account the latest scholarship and research. In doing so, he makes clear their significance at the time and in later years.

While most presidential biographies approach are lengthy, this narrative is succinct, continuing the tradition of excellence in brevity established by James McPherson's New York Times best seller Abraham Lincoln and Alan Brinkley's recent short biography of Franklin Delano Roosevelt. Schaller's biography of Ronald Reagan will be available in time to commemorate the centennial of Reagan's birth, an opportune time to reflect on the accomplishments of America's 40th president.

"A fine stepping-stone to the vast literature on Reagan, pro and con, Schaller’s summary belongs in virtually all U.S. libraries." ( Booklist)

What listeners say about Ronald Reagan

This book should be titled: a step-by-step guide to comebacks to the nice things your conservative uncle will say about Reagan at Thanksgiving. If that were the title, the book would be a tremendous success.

But for me as a non-American who doesn't love or hate Reagan, but just wants to learn something about him, this book is worthless. Maybe it's true that Reagan was a delusional liar, lapsing into Alzheimer's even in his first term, simultaneously over-controlling and out-of-touch, but I can't really believe an author who won't let one (not one!) positive claim about Reagan stand without offering some bizarre counterpoint.

Here's a typical example. Obviously it pains our author to just to admit that Reagan polled very well when he left office. And so he writes that sure, Reagan polled well in America, but... not as well as Gorbachev. Implied: put that in your pipes and smoke it, Reagan fans. Apparently, Reagan never even made Time's man of the year. But Gorbachev did! Ha!

Why does this matter? Why is it relevant in a biography of Reagan? Why would anyone be surprised that the first fairly nice Soviet leader in decades polled pretty well in a foreign country that never experienced his bad side or his screw-ups? I guess if these don't seem like good questions, you might like this book. But if they do seem like good questions, keep searching for something by a real historian sans shoulder chip, because this book could only inform someone whose easy certainties were already firmly in place.