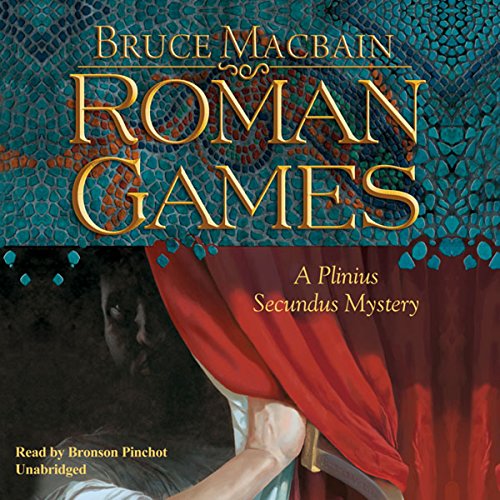 By: Bruce Macbain
Narrated by: Bronson Pinchot
Try for $0.00

When the body of Sextus Verpa, a notorious senatorial informer and libertine, is found stabbed to death in his bedroom, his slaves are suspected. Pliny, a very respectable young senator and lawyer, is ordered by the emperor Domitian to investigate. However, the Ludi Romani, “the Roman Games”, have just begun, and for the next 15 days the law courts are in recess. If Pliny can’t identify the murderer in that time, Verpa’s entire slave household will be burned alive in the arena.

Pliny teams up with Martial, a starving author of bawdy verses and denizen of the Roman demimonde. Pooling their respective talents, they unravel a plot that involves Jewish and Christian “atheists”, exotic Egyptian cultists, and a missing horoscope that forecasts the emperor’s death. Their investigation leads them into the heart of the palace, where no one is safe from the paranoid Domitian. As the deadline approaches, Pliny struggles with the painful dilemma of a good man who is forced to serve a brutal regime - a situation familiar in our own age as well.

The novel provides an intimate glimpse into the palaces and tenements, bedrooms and brothels of imperial Rome’s most opulent and decadent age.

What listeners say about Roman Games

I didn't listen to a sample when I saw this was read by Bronson Pinchot. I remember him as a good actor with a gift for voices. Well I don't know what happened but this is one of the worst listens I have ever heard. Its like the worst cartoon, painfully over acted with bad voices. The story is not well enough written to survive it. The dialog is clunky and the story is awkward. Its just bad. I like the Maddox books, spqr though I am sure the story would have been better served read by Simon Vance and love Ruth Downie and Colleen McCullough's rome books and Richard Harris with Cicero and Tiro to give u a sense of where I am coming from