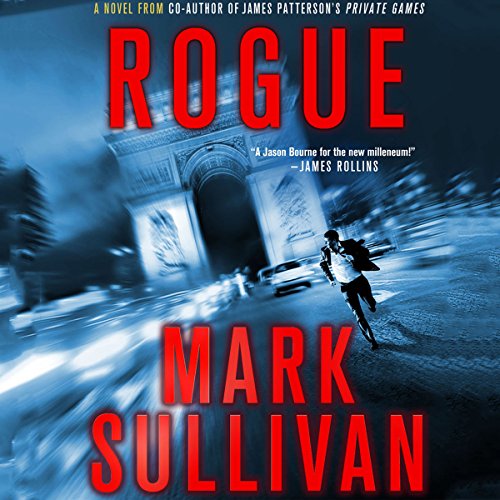 Mark Sullivan has created a propulsive, compelling new thriller. Rogue, is one part Bourne Identity and one part Mission: Impossible, but listeners will also love the nod to Hitchcock’s It Takes a Thief. Two years ago, Robin Monarch was a top level CIA operative—perhaps the best they had when it came to black bag operations. Then one day, in the middle of an operation, with his team around him in the field, Monarch walked away, leaving his old life and friends behind without a word of explanation. Now this ex-soldier, ex-operative, and orphan with a murky past is a thief, stealing from the super-rich and has surfaced in St. Tropez. But when a complicated, high profile jewel heist goes wrong, Monarch is led into a carefully woven trap designed to force him to complete the very same mission he walked away from years ago. It will take all of his skills (as well as those of the team he burned) and all of his cunning, if Monarch is to thwart the violent and deadly goals of the very powerful cabal who will do whatever it takes to bring the very dangerous "Green Fields" technology under their control.

"A true juggernaut of a thriller, pure adrenaline in print. With the creation of Robin Monarch, Sullivan has crafted a Jason Bourne for the new millennium." (James Rollins)

What listeners say about Rogue

Must be a relative of Court Gentry

What other book might you compare Rogue to and why?

This reminds me of The Gray Man books. Lots of action, around the globe travel, espionage and conspiracies galore. Really good story and great start to a new series.

Jeff Gurner does a great job with this book. His many voices are perfect and thoroughly enjoyable.

Who was the most memorable character of Rogue and why?

I was hesitant about purchasing this book. I've never heard of it or the series but it was on sale so I thought I would give it a try. So glad I did and my next purchase will be Book 2.

If you could sum up Rogue in three words, what would they be?

What was one of the most memorable moments of Rogue?

There are plenty of memorable moments, but of the many I can think of, the dropping off of the one who caused the whole mess, in "el ano".

I could listen to Gurner read the NYS vehicle and traffic law. Jeff excells at creating the voices of the characters and just has an energy about telling the story. The guy is a narrating genius.

Right there with Court Gentry and Jonathan Quinn

Where does Rogue rank among all the audiobooks you’ve listened to so far?

The plot was solid maybe a bit a bit too fancy but it did not detract from the overall enjoyment of the book. The ending was a nice surprise and thinking back based on the character It totally fits and makes perfect sense.

Have you listened to any of Jeff Gurner’s other performances before? How does this one compare?

No but after this book I will remedy that.

It made me happy to have discovered a new author and narrator to enjoy.

If you like Pike Logan, Court Gentry and Jonathan Quinn you will enjoy Robin Monarch.

This may be my new favorite hero. Much better than The Gray Man books. Thanks to the sale I have found another great author and series.

Being a fan of Vince Flynn and Brad Thor genres, I found this book to be a nice but subtle change. Robin Monarch a man who lives by a specific code can do amazing things on his own but on a team he shines. A thief then Military Special Ops then CIA and then back to a thief...he is very unique. I truly enjoyed this book and look forward to the next installment.

Would you try another book from Mark Sullivan and/or Jeff Gurner?

The good news. The narrator does an excellent job. It was quite easy to differentiate the various characters based on the voices he used. I really enjoyed his performance.

What was most disappointing about Mark Sullivan’s story?

Now for the bad news. As is typical for this genre the reader must buy into a litany of improbable events. However, this book requires more than most.

Much more disappointing was the author's pathetic knowledge of weapons. I thought at first he had used Wikipedia entries as the basis for his in-depth research but I doubt he went to all that trouble. A few specifics:

1. [Rant on] THEY'RE CALLED MAGAZINES, NOT CLIPS! [Rant off]. Modern weapons use magazines, not clips like the WWII M-1 Garand did.

2. The author describes a running gun battle in a cityscape. At one point he writes that the protagonist fires a blind shot from an unsuppressed pistol around an corner and then "heard the unmistakeable punch of a bullet striking flesh..." If you have ever fired a pistol in area surrounded by buildings you'd know that your hearing is overwhelmed and your ears ring for quite a while. You certainly would not be able to hear the soft tissue impact of a bullet around a corner before the report had even faded.

3. He falls into the all-to-familiar trap of terming a suppressor a "silencer" and relating that there is only the barest of sounds. In reality while the report of a round being fired is greatly reduced it is still very audible. Even the sound of a .22 long rifle round being fired makes a fair amount of noise.

4. In one scene where he describes an assault on a bad guy's fortified base he has one of the good guy team members jump into a Russian T-37 tank and use it to destroy several other similar tanks. The team member has never operated a T-37 yet manages to drive, fire and reload all by himself even though it required a crew of two. Oh yeah, the last T-37 built was in 1936!

Fortunately he does not try to describe most of the other weapons in the story in more than general terms. Tom Clancy would roll over in his grave if ever forced to listen to this audio book.

If it hadn't been for Jeff Gurner this book would have had few redeeming qualities.

Other than the narrator not enough to justify buying this one other than if it was on the dollar bargain table.

Don't waste your money and time on this one.

I only listened to about 25% of the book and I still wasn't interested in it so I don't wanna waste anymore of my time on it. It was the first in a series but there was little character development and I just didn't care if anyone lived or died. Also, the few mysteries introduced within the first part were not mysterious, but obvious.

One of the silliest action-adventure books I've listened to. Plenty of action, lots of exotic settings . . . but no interest in verisimilitude, in creating settings, in making scenes real or believable. The writing is so simplistic it engages none of the senses, focused only on being a page-turner, leaving all the other elements of fiction up to the reader's imagination.

Corny: old-fashioned, trite, or lacking in subtlety. Yeah, that's got it. Calumny: a false and malicious statement designed to injure the reputation of someone or something. Uh-huh, laser focused.

Mark Sullivan's plot's dead're than Ian Flemming. Worse, this guy figures if one stereotype is useful, he'll treble's every one. Of course the hero.. Robin... as in hood... is plucked from those cartoons where characters run over by a 20 ton roller truck, re-inflate like air-bags and run marathons.

Holes in the plot? Well, duh.Odd that it's not labeled "Made In Switzerland." There's a law, right? But worse, once again a US writer hates his country. Imagine, this is an international thriller and the engine of evil is a senior exec with the American government. Well, no need to imagine - go watch any of the Bourne movies. Moral... America leadership's a corrupt puppets of sinister billionaires. Sigh. Mark Sullivan checks that box... over and over. And the rest of the cast... the "good guys" are all fallen-way patriots. Hey, maybe they'll make this into a movie so we can export the message world wide, huh? Calumny.

Jeff Gurner reads good. Look for him, stay away from Sullivan. Unless you're 12 and never read or heard any of this a couple of thousand times.