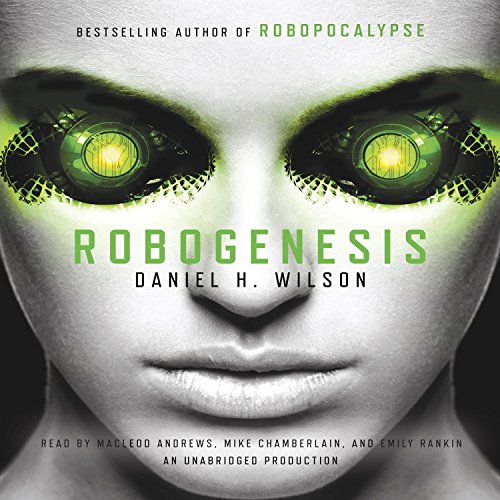 "The machine is still out there. Still live."

Humankind had triumphed over the machines. At the end of Robopocalypse, the modern world was largely devastated, humankind was pressed to the point of annihilation, and the Earth was left in tatters…but the master artificial intelligence presence known as Archos had been killed.

In Robogenesis, we see that Archos has survived. Spread across the far reaches of the world, the machine code has fragmented into millions of pieces, hiding and regrouping. In a series of riveting narratives, Robogenesis explores the fates of characters new and old, robotic and human, as they fight to build a new world in the wake of a devastating war. Listeners will bear witness as survivors find one another, form into groups, and react to a drastically different (and deadly) technological landscape. All the while, the remnants of Archos's shattered intelligence are seeping deeper into new breeds of machines, mounting a war that will not allow for humans to win again.

Daniel H. Wilson makes a triumphant return to the apocalyptic world he created, for an action-filled, raucous, very smart thrill ride about humanity and technology pushed to the tipping point.

What listeners say about Robogenesis

Picks up right you where dropped off!

The second book in the Robopocalypse series (maybe a 3rd) picks up right where you left off, but where you where dropped off wasn't what you thought. This book gave me the same excitement that I got out of the first book, and i'm hoping for a 3rd. If you are fan of near future Sci-Fi technology thrillers you have just looked at a review for one of the best.

I hate leaving this review...

Man, I LOVED the 1st book. It was exciting, suspenseful, interesting and I told a bunch of people about it.

This one is none of that. It so discriptive about minuet insignificant things that I can bet the author didn't really have a storyline but got paid in advance. It reminds me of having to meet the 12, 000 word requirements of my college papers.

I'm sad I paid anything for this book and it bums me out.
Here is how that author would have written that last sentence...
"I woke up in the morning from a long sleep. The sleep I remember getting as a child when I wouldn't stir once in the long welcoming nights I lived as a child in my parents small but cozy 2 bedroom house. There was a sadness in me and rather than confront that sadness I made a cup of coffee. It was pre-ground coffee that I usually dispised but since the morning chill was nearly as strong as my memory of my childhood, I wanted to get back to my warm inviting bed, where I slept with so may beautiful women. The memories of those women warmed me for a moment, like I was sitting the perfect distance frome a fire. The saddness kept back in as I remembered my bank account and how it was so high at times. Although it's height was never that of wall street investors, it's holdings always satisfied me. Except today it was $27.99 short. I had made a poor decision on a book months earlier and said book not only drained my account, but also my time. This made me sad and longed for just one of the beautiful women that had been in my warm bed to be there again.

A ride on the edge of your seat!

This is an amazing series about the struggle to survive in a world where robots and AI fight to eliminate the human-race. All the narrators do a great job of getting you really into the story. The way they express all types of situations with the inflections in their voice it's really awe-inspiring. I had moments on my train ride to work where I would scream out in response to a scene.

An okay story that mixes a bunch of different elements together. Biggest issue I had were there were a lot of lulls that made parts of it drag by.

Good book, not as good as the first one

Almost a re-imaging, I enjoyed it, but wasn't inspired to listen to it again. That said, I would probably buy a sequel to listen to.

I love this book I plan on sharing it with friends and family. I enjoyed the character build up.

a worthy successor to the first book

a dazzling work of imagination...surprises you at every turn. Would have made a fantastic movie !

Voice acting left something to be desired

Very clear that none of these actors had ever heard a Native American speak. Disappointing considering a lot of the characters are native.

One of the readers affects a "robot voice" that takes me completely out of the story. I could imagine the reader doing a herky-jerky robot dance every time she voiced one of them. Someone should have asked for a re-do of those passages. It was hard to get past, but I enjoyed the story enough to keep going, and the rest of the performance was solid (even the robot voice reqder)!).

I loved his first book so was understandably excited when I found this. Unfortunately by chapter five I found myself clicking the refund link.

I gave those first few chapters several listens to see if I simply wasn't paying attention or missed something. Unfortunately that wasn't the case, it just wasn't good (my opinion, ymmv). It was literally hard to listen to, I found myself so bored and withdrawn that I turned it off and moved to something else. Perhaps it picks up later but I'll never know; if I'm personally not pulled in by that point then I'm not interested in continuing.