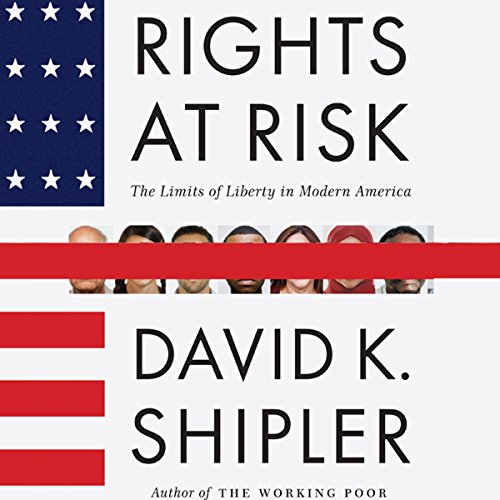 An enlightening, intensely researched examination of violations of the constitutional principles that preserve individual rights and civil liberties from courtrooms to classrooms.

With telling anecdote and detail, Pulitzer Prize-winner David K. Shipler explores the territory where the US Constitution meets everyday America, where legal compromises - before and since 9/11 - have undermined the criminal justice system’s fairness, enhanced the executive branch’s power over citizens and immigrants, and impaired some of the freewheeling debate and protest essential in a constitutional democracy.

Shipler demonstrates how the violations tamper with America’s safety in unexpected ways. While a free society takes risks to observe rights, denying rights creates other risks. A suspect’s right to silence may deprive police of a confession, but a forced confession is often false. Honoring the right to a jury trial may be cumbersome, but empowering prosecutors to coerce a guilty plea means evidence goes untested, the charge unproved. An investigation undisciplined by the Bill of Rights may jail the innocent and leave the guilty at large and dangerous. Weakened constitutional rules allow the police to waste precious resources on useless intelligence gathering and frivolous arrests. The criminal courts act less as impartial adjudicators than as conveyor belts from street to prison in a system that some disillusioned participants have nicknamed “McJustice.”

There is, always, a human cost. Shipler shows us victims of torture and abuse - not only suspected terrorists at the hands of the CIA but also murder suspects interrogated by the Chicago police. We see a poverty-stricken woman forced to share an attorney with her drug dealer boyfriend and sentenced to six years in prison when the conflict of interest turns her lawyer against her. We meet high school students suspended for expressing unwelcome political opinions. And we see a pregnant immigrant deported, after years of living legally in the country, for allegedly stealing a lottery ticket.

Often shocking, yet ultimately idealistic, Rights at Risk shows us the shadows of America where the civil liberties we rightly take for granted have been eroded - and summons us to reclaim them.

"Fascinating and provocative.... This book is a must for readers who want to stay informed of their rights in the shadowy territory where the government’s need for order and security overstep constitutional protections." (Publishers Weekly)
"Well-reported.... No matter the issue, Shipler humanizes the discussion throughout, linking each topic to stories of real people silenced, marginalized, neglected, bullied, even brutalized by a government that should know better." (Kirkus Reviews)
"An eye-opening and troubling look at failures in the criminal justice system that put at risk the rights of all citizens." (Booklist)

What listeners say about Rights at Risk

what about the right to bear arms

This work clearly leans to the left but still makes some good points.
The violations on our right to bear arms was not even brought up. the author also clearly worries about the rights of non citizens if your here illegally you don't get to be protected.