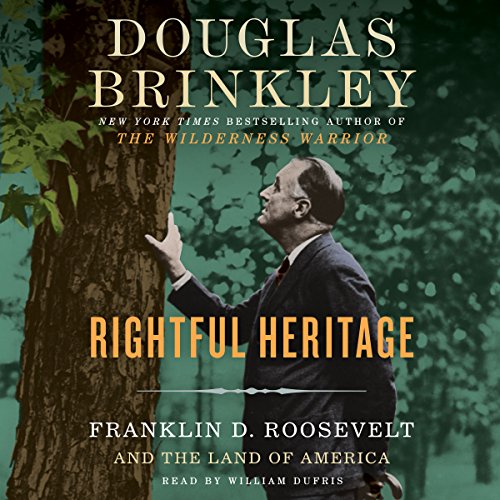 By: Douglas Brinkley
Narrated by: William Dufris
Try for $0.00

The acclaimed, award-winning historian - "America's new past master" (Chicago Tribune) - examines the environmental legacy of FDR and the New Deal.

Brinkley traces FDR's love for the natural world from his youth exploring the Hudson River Valley and bird-watching. As America's president from 1933 to 1945, Roosevelt - a consummate political strategist - established hundreds of federal migratory bird refuges and spearheaded the modern endangered species movement. He brilliantly positioned his conservation goals as economic policy to combat the severe unemployment of the Great Depression. During its nine-year existence, the CCC put nearly three million young men to work on conservation projects - including building trails in the national parks, pollution control, land restoration to combat the Dust Bowl, and planting over two billion trees.

Rightful Heritage is an epic chronicle that is both an irresistible portrait of FDR's unrivaled passion and drive and an indispensable analysis that skillfully illuminates the tension between business and nature - exploiting our natural resources and conserving them. Within the narrative are brilliant capsule biographies of such environmental warriors as Eleanor Roosevelt, Harold Ickes, and Rosalie Edge. Rightful Heritage is essential listening for everyone seeking to preserve our treasured landscapes as an American birthright.

What listeners say about Rightful Heritage

I listen to this over and over..
the human over coming adversity‼️
the gift of preservation of nature in America‼️
the ham handed politics of FDR.. a rare instance when it was good for the PEOPLE‼️
and so much to learn about our natural places and track changes overtime‼️

I have read many books about FDR, but had no idea how much he's did for conservation.
This book is a great miss of history and his love of the environment.

Another Side of FDR

This book is well researched and written. It illustrates another side of FDR beyond the geopolitical issues of his time. Five Stars!

This is probably the best book I've read in a year. So much history. When I was finished I wanted to grab a shovel and start planting trees. I like the national parks or state parks or just to have in inkling to read a great historical book this it.