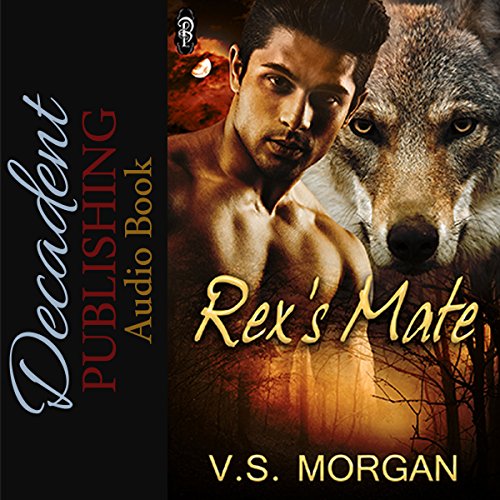 Former assassin Rex realizes retirement isn't all it's cracked up to be without someone to share it with. He longs for the kind of connection his friends Hunter and Casey have. Tired of meaningless hookups, Rex and his wolf are ready to find their mate. But what if his mate is the human-were bunny shifter his former boss placed in his care? Can he win the heart of this fierce and beautiful man?

Abducted and genetically altered against his will, Aaron is thrust into a world he'd thought was only make-believe. Under the protection of a Minnesota wolf pack, he struggles with his new abilities as a rabbit shifter and his growing attraction for his cocky protector. Can he trust the former assassin to keep him safe and find his brother still being held captive by the evil group responsible for changing his life forever?

What listeners say about Rex's Mate

Love this story and the new narrator!

We met Rex in Hunter’s Mark, he was Hunter’s former lover and spotter. He happened to make an off hand comment about bunny shifters… and what do you know?

Aaron and his twin end up captured by scientists relating back to WWII and their DNA is spliced with that of a rabbit in an attempt to build a “super soldier”. When Aaron is freed, he doesn’t want anything to do with this new world he’s been thrust into – even if he is madly attracted to Rex, the guy who saved him from the lab.

This is a great sequel to Hunter’s Mark and maybe even a bit better. I felt more for the characters and also felt their attraction and romance a bit more. Aaron’s unwillingness to simply buy in to the party line felt really authentic to me and I especially loved how simplistically devoted Rex was to making Aaron’s world a better place. Totally crush worthy!

I really hope we get to see the Den Mother’s story that is hinted at because I am loving this new series!

Audio
TG Burns is a new narrator to me and he does a fantastic job with this! He gives Rex a lovely growly alpha voice and Aaron a fun Brooklyn accent. I didn’t love what he did with Den Mother or with Casey but they weren’t the focus so I hope they get changed when it’s their turn to be in the spotlight. I loved this book and the audio was just as good!

Not your typical shifter story

I loved this story. It is slightly different than your regular shifter story. Also, even though this is Book 2 in the Akio assassins’ series, this is a stand alone. I did not read book 1 and still really enjoyed this one. It was full of dark drama, action and romance, everything I like in a shifter book. Aaron and his twin brother David are kidnapped by evil scientist connected to the Nazis. They are experimented on and become hybrid shifters. Aaron is a bunny, but don’t let that fool you; he is a pretty fierce bunny. Rex was born a wolf shifter and has a dark past. In fact both MCs do. Also, don’t make any sexual assumptions about who is top dog in bed. A love the chemistry between Aaron and Rex and all Rex is willing to do for his bunny. I also enjoyed the band of brothers dynamic with the assassins and look forward to future books as they all appear to be gay. The narrator puts in a great performance and really brings these men to life. He does very diverse voices and accents. Overall highly recommend if you like shifter stories.

Where does Rex's Mate rank among all the audiobooks you’ve listened to so far?

All of it, save for the slaps, but besides that- God damned HOT.
I LOVED IT ALL!!

I'm so reading this again.

Call me crazy but I love this book like mad.
Way to go Morgan and Burns. OW!

Have you listened to any of TG Burns’s other performances before? How does this one compare?

Nope. He's gruff and gives the characters life without being too much of a hot shot tough guy.

I feel like I drank coffee and can't settle because it's so good.

In loved with story

V S Morgan just became one of my favorite authot , and the narrator did a superb translation of the story.