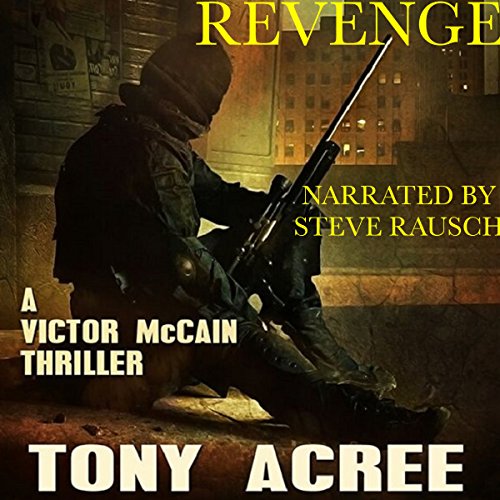 By: Tony Acree
Narrated by: Steve Rausch
Try for $0.00

Victor McCain, God's bounty hunter, knows how to hunt down the world's most evil beings and remove them. Permanently. In Revenge, the thrilling follow-up to The Speaker, Victor learns what it's like to be the one targeted for death.

With a $10 million bounty on his head, assassins are finding their way to Louisville to try to collect on the contract of a lifetime, including Black Ice, the world's top killer. But he is not alone.

An old foe has returned from the dead to seek revenge on Victor by destroying those he holds dear, including a new love. To save her and the others close to him, he must avoid the assassin's bullet and the efforts of an angry cop intent on putting Victor away for life and unravel a trail of kidnapping, torture, and murder.

What listeners say about Revenge

So, I will preface this review with the caveat that I am starting with this book. I have not read/listend to the previous books. In fact, when I requested it, I didn't realize it was the 3rd book of the series. I'll start with the narrator. I think he did a great job. His voice is interesting. He put emotion and passion into his narration. The voices he does for characters are not super different, but enough so, you can differinciate them. I was a little lost at first, but I was able to get into the story and become vested in it. In fact, I'm tempted to go back for the previous books.

You live by the sword, you die by the chimney floo

First of all this is book 4 in the Victor McCain series, so if you're not up to date you might want to go back and start with Hand of God, the watchers, the Speaker and I would also read Vengeance the Sam Tyler book too as some of what happens in that book is referenced here.

Still reading? If you haven't read the other books or it was a while since you did there are enough reminders to keep you up to speed, something's are briefly explained. This book feels like the rounding off of a chapter of the Vic McCain story, much like the Marvel Cinematic Universe has phases I think this finishes off phase one of the McCain narrative and that in itself is a sad thought. I don't know how long the wait will be until Tony writes the next book (he better write another!!) but having read up until now pretty much back to back there's going to be a Victor McCain hole in my life for a while, especially knowing Tony is working on the movie!

The story picks up after the Speaker / Vengeance and without spoiling it rolls with themes from the last book including the $10million bounty on Vic's head and the hunt for Vic's brother Mikey.

The action never stops and there's a few new characters to get acquainted with, one of whom really should have been in Vic's crew from the beginning and I think should get his own spinoff. The other not so much a new character but we get to know her more here. There's also the return of an old friend.

This book is pretty much all I could have asked for after reading the last book, if I had a list of demands to be met Tony nailed it in that respect.

The one thing that still makes me laugh so far though is how we get graphic description of violence and mutilation but none of the characters swear. When a battle hardened man says "That ticks me off" it gets me everytime. Kudos to Tony for keeping it clean though and not filling his books full of profanity.

The narrator Steve Rausch again does a very good job with the main characters and the voices he uses for each character really fit now.

The title of my review "you live by the sword, you die by the chimney floo" was one of the more rediculous lines in the book and it stuck out for me enough that I wanted to commemorate it here, just an example of some of the humour of the book.