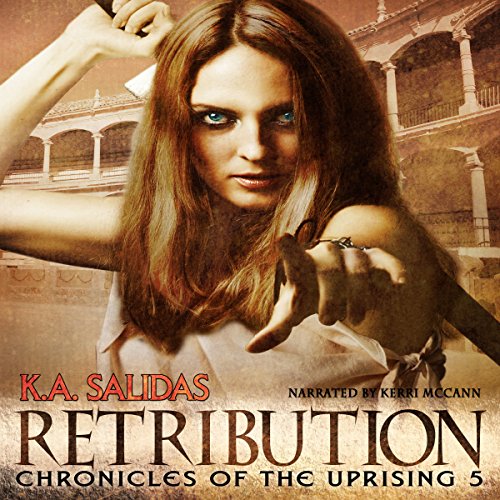 As much as she dreams of a simpler existence, blood and violence are Mira's way of life. Former gladiator turned freedom fighter; she's carved a trail from New Haven to Caldera Grove and back, freeing her people, the vampires, from enslavement by the humans.

But with victory almost within reach, a new and powerful enemy emerges. One who'll be satisfied with nothing less than complete subjugation - or destruction - of all supernatural beings.

With a secret army of his own, he's more than prepared for any resistance Mira and her patchy rebel forces can offer, and demands their immediate surrender.

Never one to back away from a fight, Mira believes she's ready for anything. But with the battle lines drawn she will be forced to make the ultimate sacrifice.

Kill or be killed.

Deep In The Heart of Texas

Mira and her motley crew of beings are back. A council and several other Iron Gate cities comprised of vampires, humans, shifters, and otherkin would have a plethora of issues without the potential for another fight for freedom and survival. This time they are threatened from the southern city of Lone Star. And sadly Lone Star is full of unbending, bigoted politicians and one of the scariest group of Texas Rangers that I have run across.

K.A. Salidas brings us the fifth and second to the last installment of Chronicles of the Uprising. She continues to entertain us with continued world building, a cast of diverse and intriguing characters, and a story designed to keep you on the edge of your seat.

Kerri McCann again gives this vast variety of characters great voices and personalities. You can feel the emotional turmoil. I especially like her rendition of Justine.

What the heck is that hideous smell coming from the regent and his cronies? It certainly is not anything like “the sage in bloom is like perfume, deep in the heart of Texas”.

This audiobook was provided for an unbiased review.

I cannot wait until "Annihilation” the sixth and final part is released on audio.

another great installment of this series

this series has been so great to read. each book filed with emotion.. loved it

still those with strong prejudice...

Kerri has become the voice of Mira and the stories. I do enjoy her narration, and she fits Mira and even Justine, but I didn't feel George's relaxed personality when we hear from in his head. I felt she still had the same personality when reading other characters where the author is writing them differently. During character dialog, she talks with different personality but when narrating their thoughts all sound as Mira does in her thoughts, not like when they talk. Then as the book goes, she embodies the characters more and more in their chapters.

In the end of this book Mira is who she has always been. I love how she fights yet turns things around for life. Her speech at the end is wonderful! Mira isn't a diplomat but she gives the best speeches from the heart in the heat of the moment.

This book is not just from Mira's POV. Which is nice to see the other characters from the inside in this stressful time of tedious peace between all. By doing this we really get to see the divide in how people think. It's going to take time and generations for that divide to disintegrate. But now, with how they've lived, they have a specific reaction way. Vampires are more to react/act with quick results. With being the warriors and fighters they are force to be, they are quick to fight when things turn on them. The humans are more diplomatic, as we see with Lucian and a few others. And the Otherkin like to sit and think out a plan before the quick actions. These extreme differences make it hard for the council to come to a decision.

Mira is struggling with her new position. She's a leader of the unified Otherkin and humans. Those on her council don't see eye to eye, but that's what is needed at the same time. Different views to try to come to a middle ground. But there are cities they have to bring to peace, or fight, not each other.

Now I'm curious as to where we will be and what will come in the next book! I'm just hoping all will be safe...