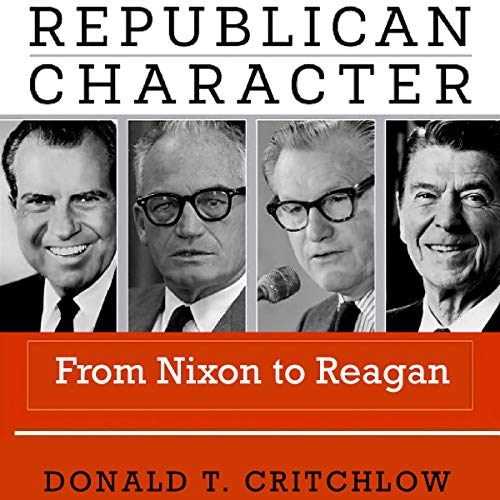 By: Donald T. Critchlow
Narrated by: Gary Galone
Try for $0.00

"Politics makes for strange bedfellows", the old saying goes. Americans, however, often forget the obvious lesson underlying this adage: politics is about winning elections and governing once in office. Voters of all stripes seem put off by the rough-and-tumble horse-trading and deal-making of politics, viewing its practitioners as self-serving and without principle or conviction.

Because of these perspectives, the scholarly and popular narrative of American politics has come to focus on ideology over all else. But as Donald T. Critchlow demonstrates in his riveting new book, this obsession obscures the important role of temperament, character, and leadership ability in political success. Critchlow looks at four leading Republican presidential contenders - Richard Nixon, Nelson Rockefeller, Barry Goldwater, and Ronald Reagan - to show that, behind the scenes, ideology mattered less than principled pragmatism and the ability to build coalitions toward electoral and legislative victory.

Drawing on new archival material, Critchlow lifts the curtain on the lives of these political rivals and what went on behind the scenes of their campaigns. He reveals unusual relationships between these men: Nixon making deals with Rockefeller, while Rockefeller courted Goldwater and Reagan, who themselves became political rivals despite their shared conservatism. The result is a book sure to fascinate anyone wondering what it takes to win the presidency of the United States - and to govern effectively.

"A compact and illuminating history...." (The American Prospect)

"This readable history offers shrewd insights into the disposition of national leaders then and now." (Publishers Weekly)

What listeners say about Republican Character: From Nixon to Reagan

Donald Critchlow is a professor of political history at Arizona State University. This is not a discussion of Trump’s presidency, but it is relevant to it.

Critchlow provides a brief biographical sketch of Nixon and Rockefeller; this is followed by a chapter comparing and contrasting the temperament, character, virtue and honor of the two men. The analysis is summarized by lessons from their political careers. Then he does the same for Goldwater and Reagan. The author said he chose these four as Rockefeller represented the liberal side of the republican party, Nixon the center, Goldwater the right and Reagan the far right.

Critchlow examines what temperament, character, virtue and honor it would take to be president. The author says voters need to judge candidates on these four items as keys for successful governance. Critchlow is even handed in his character study of each man. Critchlow chose these four republicans to demonstrate his point, but it could be used no matter what the political ideology.

The book is seven hours and fifty-two minutes. Gary Galone does a good job narrating the book. Galone is an actor and audiobook narrator.