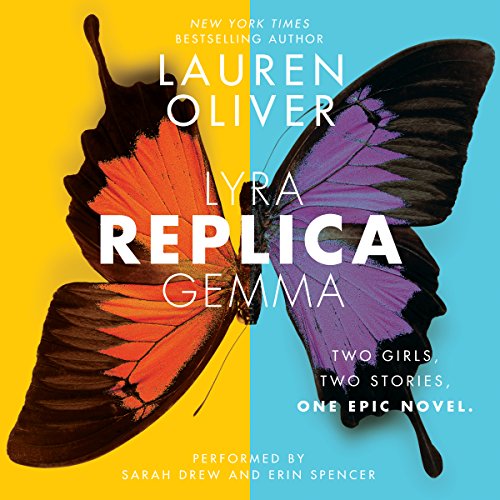 By: Lauren Oliver
Narrated by: Sarah Drew,Erin Spencer
Try for $0.00

From Lauren Oliver, New York Times best-selling author of Before I Fall and the Delirium trilogy, comes an epic, masterful novel that explores issues of individuality, identity, and humanity. Replica contains two narratives in one: Lyra's story and Gemma's story. The stories can be listened to separately, one after the other, or in alternating chapters. The two distinct parts of this astonishing novel combine to produce an unforgettable journey.

Lyra's story begins in the Haven Institute, a building tucked away on a private island off the coast of Florida that from a distance looks serene and even beautiful. But up close, the locked doors, military guards, and biohazard suits tell a different story. In truth Haven is a clandestine research facility where thousands of replicas, or human models, are born, raised, and observed. When a surprise attack is launched on Haven, two of its young experimental subjects - Lyra, or 24, and the boy known only as 72 - manage to escape.

Gemma has been in and out of hospitals for as long as she can remember. A lonely teen, her life is circumscribed by home, school, and her best friend, April. But after she is nearly abducted by a stranger claiming to know her, Gemma starts to investigate her family's past and discovers her father's mysterious connection to the secretive Haven research facility. Hungry for answers, she travels to Florida only to stumble upon two replicas and a completely new set of questions.

While the stories of Lyra and Gemma mirror each other, each contains breathtaking revelations critically important to the other story. Using a downloadable enhancement, listeners can decide how they would like to listen to the audiobook, as readers can choose how to read the print version. They can listen to the story of Gemma or Lyra straight through first, followed by the other girl's story, or they can move between chapters in Lyra's and Gemma's sections. No matter how it is listened to, Replica is an ambitious, thought-provoking masterwork.

What listeners say about Replica

The format is a gimmick, but still a good read

Often, if I like an author, I just download the book without knowing anything about it. So that was a mistake. This book has a formatting gimmick. If you’re reading the print version you can:
1. Read Lyra’s story first
2. Read Gemma’s story first
3. Alternate chapters—flip book style.

I didn’t know this going in. So I listen to the intro, which was a little confusing, but I gleaned that certain chapters were told from both POVs, so there would be some repetition in dialogue.

So I start listening. It was Lyra’s story first, which was sad, strange, subdued. Then came Gemma’s story, which was not exactly more interesting, per se, but at least more “relatable.”

After finishing Lyra’s, I was sort of pissed. There was a big revelation and a big event that I would rather have not known because then I had to spend the next half of the book knowing stuff that reduced the suspense considerably and made me not invest much in one of the characters. The same could be said if you read Gemma’s story first.

Why it wasn’t presented in alternating chapters, I don’t know. That would have been the best route. You get to hear two different audio narrators and you wouldn’t have felt like you read a book review full of spoilers right before you read the book. It’s especially baffling because while there are two spots in the book where you experience the same scene from 2 POVs, Oliver did an excellent job in NOT making it too repetitive. You can alternate with the audio (see the PDF), but it would be really cumbersome. It would have been a 4 star listen for me if it had been presented in alternating chapters.

Approaching the end of the book, I hadn't realized it wasn't stand alone. That being said, and realizing there will be a sequel, I am intrigued and will continue. A unique story. The POVs are slightly different than most POVs. Each person doesn't remember their conversations or scenes exactly like the other person. There are differences, slight changes, as most people perceive things/happenings. Refreshing, really.

Lyra's story is told as a Clone, a Replica. It's the only life she knows, but she is curious to find out more. There is no touch, closeness, caring, humanity. Yet she searches for the one person who did show her kindness. In so doing, her world is changed forever.

Gemma is a normal girl who feels like an alien. Her parents are hiding something. She knows they love her but feels as if she is a disappointment to them. She defies her parents and takes off. What she finds out changes her world.

At some point the two girls world converge. Both are part of a mystery, a cover up. As they put the pieces together, more questions surface.

Lauren Oliver is a hit or miss with me. This was a hit. I look forward to the next installment.

Kudos to Sarah Drew, whose voice was instantly recognizable as April on TV's "Grey's Anatomy." She was superb. She narrated the part of Lyra.

That is almost the only good thing I can say about this book.

First of all, this book should be marketed as a YA novel. There are too many scenes of the teenagers eating burgers and fries together wondering if the other person is going to kiss him/her. Ugh. And who cares?

Secondly, the mystery of Haven is given away near the beginning, and we learn very little else of consequence. The revelation about Gemma comes later in the book, but was obvious and expected.

The ending bothers me the most. Author Lauren Oliver simply brings the story to a screeching halt. The publisher says: "No matter how it is listened to, Replica is an ambitious, thought-provoking masterwork." It is not at ALL thought-provoking, and certainly is not a masterwork.

I RECOMMEND instead "The Girl with all the Gifts" to any reader who might enjoy a terrific story that happens to also include odd children.

I enjoyed the story but I wish I had the version where the stories were intertwined instead of one after the other.

There are three possible ways to listen to this book:
Gemma first
Lyra first
or alternate chapters

There should have been two possible downloads, this one and another where the characters chapters alternate. The enhancement is just a PDF of the chapters and you have to manually jump around if you want that listening experience. Also the chapters in the PDF are off.

The story itself is entertaining, but predictable.

Overall, the book was entertaining, the storyline was decent. However, I felt it could have been a little bit better. I felt more twists and turns were needed to add a higher excitement or thrill to the plot. Especially towards the end. I understand Oliver wanted to end somewhat on a cliffhanger to encourage the reader to want to read Ringer, Replica’s sequel. However, I still believe Replica could have had higher potential.

I'm glad, I guess, that I saw "book one" in the description of this book somewhere, so I wasn't as surprised when I realized the book was almost over before it had really gotten started. This book is told from two points of view, the whole first half is Lyra (voiced by the actress that plays Dr. Kepner on Grey's Anatomy) and the entire second half is Gemma. They tell their own stories that intersect about halfway through each's chapters. I was really expecting more Lyra chapters after Gemma's... that then the chapters would maybe alternate, but they don't. The premise is good, two girls about the same age: one clone who's never known a world outside a lab and one sheltered daughter of a millionaire and how their lives interconnect. I just wish the author had written a longer book and completed the story. This is a whole book of scene setting and character introduction. It's interesting and action packed at times, but it's not a stand-alone book. And I know it's YA, but all of the young love happening in the middle of chaos and danger made me roll my eyes. Yes please pause in the middle of being pursued to think about the feel of his hand in yours. <g>

Wow, got into the story almost immediately and couldn't put it down till I finished it and eM44ÿúà3uuu33qWww84887

This book was amazing!! Absolutely 10/10 would recommend to read this in alternating chapters! It made the suspense and intensity that just more enthralling!