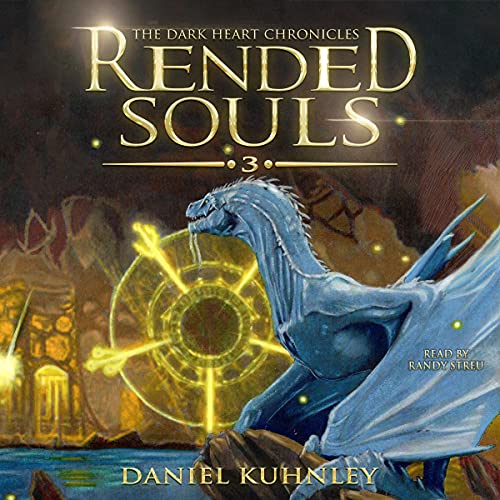 By: Daniel Kuhnley
Narrated by: Randy Streu
Try for $0.00

An evil dragon. A powerful mage. An ancient realm on the verge of a devastating nightmare....

Nardus is terrified he may have doomed his kingdom. Instead of resurrecting his beloved wife and children, he brought forth a malevolent winged-monster who is advancing on his people with a mind-controlled army. And now his last hope of redemption lies in discovering an age-old magical secret.

Twins Alderan and Aria’s hostile history delivered them to opposite sides of a brewing war. And as Alderan struggles to master his abilities while torn between loyalties, Aria’s growing powers could hold the key to the kingdom’s fate. But faced with an enemy that controls his sister, Alderan has no choice but to outsmart a manipulative wizard and a centuries-old dragon.

As the battle lines are drawn, can Nardus and Alderan claim their rightful place to rescue their world and save Aria from herself?

Buy Rended Souls to enter a clash of conjuring today!

What listeners say about Rended Souls

Rended Souls is the third book in the Dark Heart Chronicles Series. Nardus, still trying to resurrect his family, causes an unintended disaster and must find a way to save his people. Alderan and Aria are magical twins with growing powers but opposing loyalties. Alderan needs to try and find a way to save his twin that is being manipulated without destroying the world.

Daniel provides a compelling story with great depth and fascinating characters. He has an amazing way of drawing the listener in and making them feel things that the characters are feeling, and feel as though we are in the story ourselves. The descriptions, characters and story are brilliant and I thoroughly enjoyed them all.

Randy Streu narrates with style and excellent character voices. He has good pace variety for the various elements of the story to add to the feeling of the story and the emotional elements therein. I enjoyed his performance and am so glad that the same narrator was used for all three books in the series.

I highly recommend this book, as well as the entire series including The Dragon’s Stone, and Reborn. Totally worth it!!

Excellent 3rd entry in the series. The author has created a very imersive world with believable characters and an incredible story. Very well narrated as well.

Superb continuation of this awesome series

The story world and characters in Daniel Kuhnley’s Dark Heart Chronicles continues to impress! I continue to be impressed by his boundless creativity and cleverness. This installment left me wondering how he could possibly resolve this sprawling, epic tale full of dark magic, deep relationships, and dragonfire. I can’t wait for the next installment! Grab this series today.

I must admit that this third volume is better than the previous two combined. Once Cinolth the dragon came on to the stage the tale became more interesting and focused for me. As complex as the story may be, it always felt a bit long-winded to me. Anyway, individuals and groups of characters make their way to a literary meeting point of the sub-plots. A war is brewing and the outcome is far from determined. As Wizard Wrik said, “Who will be left standing?” I was given this free review copy audiobook at my request and have voluntarily left this review.

Another great story in the series

I really loved this next book in the series. The story and performance were great, and the ending was riveting. I cannot wait until the next one comes out.