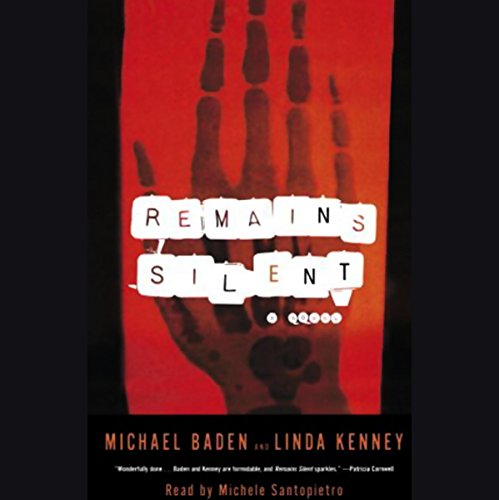 Philomena "Manny" Manfreda is a crusading attorney for the disenfranchised. Five years out of law school, with an apartment not much bigger than one of her beloved Prada shoe boxes and a burgeoning reputation as one of the city's fiercest litigators, Manny is an unabashed shopaholic who changes her hair color weekly, carries her poodle, Mycroft, everywhere, and whose idea of therapy is the preparation of an eight-course Italian meal.

Dr. Jake Rosen is the deputy chief medical examiner of New York City, a confirmed workaholic and bachelor who lives alone in an oversized nineteenth-century Manhattan brownstone littered with morbid memorabilia and forensic artifacts, and who divides his life between the autopsy table and Chinese takeout.

When a body is unearthed beneath the construction site of a mall near the Catskill Mountains, Jake is called to the scene by his elderly mentor, Dr. Pete Harrigan, to examine the bones. Further investigation reveals a gruesome discovery: additional skeletal remains with striking abnormalities. After one of the victims is identified, the family of the deceased retains Manny to represent them, and, with Jake, she is swept into a terrifying vortex of murder and deceit, where a mounting body count hides both a shocking cover-up and a devastating love story.

"Energetic thriller....It's a very promising start to a new series." (Booklist)
"Bullets, bones, and baffling bodies. From corpus delicti to habeas corpus, Baden and Kenney are the real thing. They know murder, and it shows!" (Kathy Reichs)

Interesting forensic detail makes this book bearable. The story is predictable and the writing is amateurish. Don't waste your time with this one!

I actually liked the book and the characters. They were different from the usual. However the narrator irritated me. She wasn't really a "narrator" but a reader. She made no attempt to change voices for the characters and this made it hard to follow who was speaking most of the time. If there are more books to come in this series, I hope another narrator will be chosen.

The plot of this book is reasonably interesting, except for a ridiculous Deus Ex Machina ending. The main problem is in the reader; she seems to have no ability to change her intonation or accent. As a result, when reading a conversation between a man and a woman, it's impossible to tell who is speaking. This detracts considerably from one's appreciation.

I knew within the first hour I made a mistake buying this audiobook.....it was very boring, predictable and the characters were not likable at all. The narrator was annoying at best.....save your money..........I listened to the very end hoping it would redeem itself......didn't happen.

I too found the reader annoying. The way she kept droping her voice made it hard to hear in these spots. The story itself was ok, but the reader could have been a lot better.

This is the most poorly written book I have ever read or listened to. The authors should stick to medicine and law or else hire someone that knows how to write. The more I listened, the worse it got. Pass this one up!!!!

The science is good but very basic. The story is prosaic. The writing is awful. The narration is shrill -- but, then, the leading female character is mostly an hysteric.

I was looking forward to this book after meeting Dr. Baden at a conference, and no offense but it was very lacking in expectations. I wish I would have saved my time.

It's ok, is the best I can say. I like Manny - but I'm a fashionista, so the Prada references kept me interested.... Nice twist at the end, but.... all in all nothing special.

Cheetos for the mind

Had high hopes for the forensics - but just too formulaic to engage me. Protagonist is rather obsessed with designer shoes/clothes and just too precious for words; this works in "The Ivy Chronicles" as character development, but here it is just annoying and shallow. (Hint: lists of clothing and shoes tell us more about the character of the author than they do the protagonist.) The stock characters are all here: the scruffy ME, the sweet old farm couple, the evil developer, the corrupt sheriff, the ambitious attorney, the drag queen sidekick, the secret government conspiracies...
I finished it as it was the only book on my player that day, but I felt a little guilty.
The interview with the authors at the end was more interesting than the book, actually.