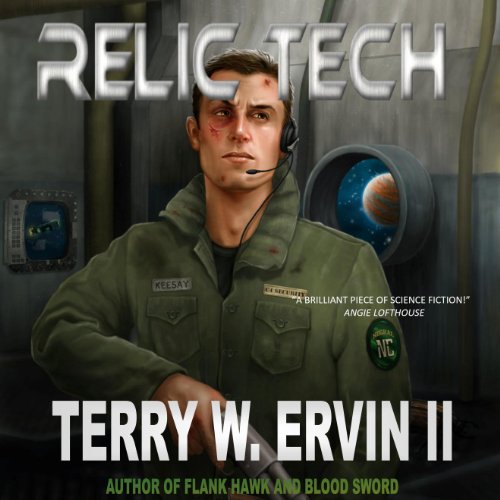 The Silicate War has been over for 15 years, and the tension among the dominant galactic races is growing. Many fear that the Umblegarri, the ancient alien race that ushered humanity into the interstellar galactic community during the Silicate War, have been targeted for conquest by the Crax and their allies.

It's no longer speculation. The invasion is underway and Kra finds himself strapped to a hospital bed, critically injured and surrounded by hostile corporate lawyers, high-ranking military and intelligence officials, ambitious members of the criminal justice apparatus, and an Umbelgarri diplomat. All are demanding answers or their pound of flesh.

Krakista Keesay, a Class-4 Security Specialist, doesn't have the answers they demand. Why did he sabotage a top-secret research facility? What was he doing on a quarantined planet? Why did he set up the civil transport Kalavar for destruction? Is that all? Not even close.

Kra turns to his only option: Allow his brain to be hooked up to an experimental device so that he might prove his innocence. Or lose his mind.

What listeners say about Relic Tech

Louis L'Amore of the 23rd century

Would you listen to Relic Tech again? Why?

No because I never listen, read, or watch a audio, book, or movie twice. But I thoroughly enjoyed this story.

Which character – as performed by James Conlan – was your favorite?

I did think Mr. Conlan's voice was a bit too formal in some action parts of the story. Hence only a four star rating.

Difficult to do with any audio book. I listen in my car while traveling

I read another review that panned Relic Tech rather badly. In my opinion the reviewer was completely wrong. The story concept of a warrior armed with only a shotgun and pistol against future laser and energy pulse weapons is a brilliant concept. It gives the listener something to be grounded in. Lets face it, inner galactic wars is not a realism many of us can believe in so the entertainment aspect is what we're left with. The other reviewer stated the concept was unbelievable. As if inner galactic wars is believable. I read and listen to stories to be entertained. This story is entertaining. Mr. Ervin's ability to weave a tale is extraordinary.In a make believe world he made totally unbelievable characters come to life.

Pretty original for a relic!

I first read Terry Ervin II's book Outpost, and it blew me away. The story had the tone, the characterization, the plot, and the pacing that really appealled to me. So, I knew that I couldn't let anything else by the man slip past me. So, I got Relic Tech just from the singular reading of his fantasy/Gamelit novel. Man, am I glad that I did!

Ervin's writing style is very appealing, it is easy to listen to, is intelligent, and has fantastic pace to it. The story is sensible and fun and sucks you right in. This is one of those stories that iwould say I couldn't put it down if it was in print, as it was I had a hard time to stop listening when I had to. I am so glad that this is just a 'Book One" in a series as I would have called for more if it weren't. I almost had to laugh because the story is so frenetic that you feel out of breath in some spots, and I really believe that Ervin deliberately provided a few breathing spaces for the listener to rest in before cranking things up to 11 again.

I'm not sure if it has a western hero , an Indiana Jones (movies 1 & 3), or James Bond type feel for the main character, but it really doesn't matter because you can very clearly see that the MC is pretty cool and exciting. Ervin has a way of captivating his listeners and maintaining their attention. I love his writing style. Amazingly, it holds your focus for almost 24 straight hours.

Conlan does a really good job narrating; although I have to admit that there were a few points that he seemed to be talking really fast, like he was sped up. It worked really well in the fight scenes, but it did kind of throw me off when we hits a slow down point. It wasn't enough for me to deduct any stars but I do think you, as a listener, ought to know about it. Regardless, he handles the story quite well, and I had no real complaints.

This is a fun story, and I have very clearly discovered a new writer for me to follow. You should really look into all of Ervin's writings, as I know I will. Even though I did receive a promo code for this review it in no way influenced my considerations of the material, and in fact, inspired me to be more honest. Getting a code generally makes me harsher as a reviewer as I am more often concerned what someone like Me will decide based on my review.

One of the better fiction books I have enjoyed this year. I look forward to book two of the series. ..

this book has a terrible description but it is amazing its original and has depth its the perfect length and the narrator was also good well worth the credit.

Terry W Ervin II II really does a fine job laying out the technology and the surroundings in which he places his characters. but more enjoyable to me, is the fact that Krakista Keesay really tickles the grumpy old man inside of me. While he is not particularly unpleasant to be around, most people find him so after a short while simply because he doesn't put up with any BS. He has a bit of a hot temper when people speak down to him, but he's earned every right to be defensive about his position, perhaps in spite of his current station.

James Conlan does a wonderful job voicing the characters and working in just the right amount of audio processing to really sell the story that Terry has crafted. Five stars all around, much love. Dueling Ogres Podcast.

Krakista Keesay, a Class 4 Security Specialist, find himself strapped to a hospital bed and accused of crimes against humanity. The worst part is that he doesn't remember a thing, and the only way to defend himself is using a procedure that could fry his brain. But he has no choice. This will be the beginning of the Crax wars.

The premises of this book were great. Our main character is accused of something he is sure he did not do, but as he does not remember anything, they will have to use a dangerous procedure to fill in the gaps. I think the intrigue was well built, and I felt quickly interested in what could have happened to Krakista onboard the Kalavar.

There are a lot of characters in this long book. Most of them are two dimensional, but we get an accurate picture of Keesay. A paranoid know-it-all security specialist, with a great passion for old guns, and prone to make friends and enemies with great ease. All these qualities make of Keesay an unlikable person for many. I have to say, that despite the fact that I shared some of his motivations, I had some troubles to really understand him and connect to him.

This is an action-packed book, with many characters and events, but I have to say that it feels a bit too long winded for me. I started it with great interest about finding out the truth but there are quite some parts in the book where nothing important happens. I agree that they help in giving the reader a picture of Keesay, but in my opinion, the book would have benefited from having these parts edited. I refer to the parts where he is shoot practicing with his mates or picking up fights. I am not saying that they should not have been included, but they felt too long for me and made the story drag. They also felt too much like a testosterone competition.

Despite this being quite a good story and having a unique main character, I found something missing. Somehow I lost my interest along the way, and in the end, I did not really care for Keesay. It is like the story missed a soul.

I really enjoyed James Conlan's narration. I have read reviews complaining that he does not have an ample voice range, but I disagree. I think the characters were easily discerned, and anyway, there are many characters in this book, which makes it a difficult one for narrators. I think Conlan did an excellent job in portraying characters and keeping it consistent. The beginning of each chapter contains bits of History and knowledge about this world, and Conlan used a different accent for these parts. I think this worked very well in differentiating this parts from the rest. Conlan also used sound effects for some alien characters or when the voices came from a radio. This was very well done, and the audio production was perfect.

I think this is quite a good book but felt a bit long in some parts. I think it could be mostly enjoyed by military sci-fi fans.

A more believable story would help. Better narrator with more variety between voices. I gave up part way through the second half.

Would you ever listen to anything by Terry W. Ervin II again?

Nope - not a chance. Terry W Ervin is on my "avoid at all costs" list (I usually use another name for this list, but don't want to be rude).

I suppose at least the performer's voice was pleasant, but there wasn't enough variety between character voices - leading to losing track of which character was talking.

Almost anything/everything led to me being distracted - I was that bored. I persisted as far as I did because the premise had promise, but I couldn't stick with it to the end, I just gave up on it.

If you like being bored, or just need some background noise while doing something else, then grab this, otherwise, avoid it.