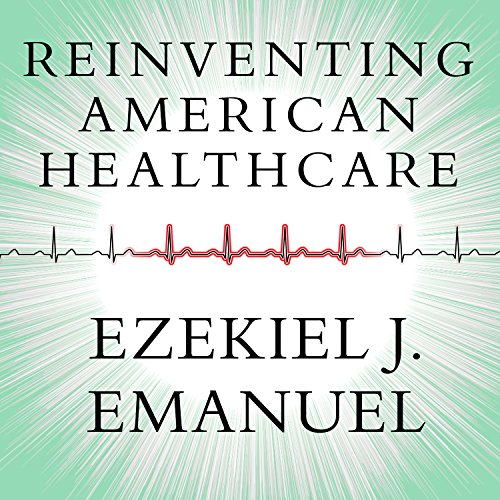 By: Ezekiel J. Emanuel
Narrated by: William Dufris
Try for $0.00

In March 2010 the Affordable Care Act was signed into law. It was the most extensive reform of America's health-care system since at least the creation of Medicare in 1965 and maybe ever. The ACA was controversial and highly political, and the law faced legal challenges reaching all the way to the Supreme Court; it even precipitated a government shutdown.

Ezekiel J. Emanuel, a professor of medical ethics and health policy at the University of Pennsylvania who also served as a special adviser to the White House on health-care reform, has written a brilliant diagnostic explanation of why health care in America has become such a divisive social issue, how money and medicine have their own American story, and why reform has bedeviled presidents of the left and right for more than one hundred years.

Emanuel also explains exactly how the ACA reforms are reshaping the health-care system now. He forecasts the future, identifying six megatrends in health that will determine the market for health care to 2020 and beyond. His predictions are bold, provocative, and uniquely well informed. Health care has never had a more comprehensive or authoritative interpreter.

"A plain-English explanation of a tricky topic." ( Booklist)

Would you try another book from Ezekiel J. Emanuel and/or William Dufris?

I would not read another book by Ezekiel Emanuel. William Dufris does a nice job narrating the book.

What was most disappointing about Ezekiel J. Emanuel’s story?

I expected a slightly biased review of our healthcare system being that it was authored by an Emanuel. I hoped though that I'd get a good education on the state of healthcare. Unfortunately my experience tells me otherwise. I found the book to be roughly equivalent to getting an education on a topic from a Michael Moore film. There are some interesting points, but you have to be very careful in selecting what to and not to take at face value.

Just one example of a half truth that I ran into and immediately new was wrong. In chapter 4 Emanuel describes Medtronic as having 16.2 billion dollars in sales (which is true for 2014), but then goes on to claim "Medtronics profits are very, VERY high above 60%." Chapter 4 @51:24. In 2014 Medtronic made 3.6 billion dollars on 16.2 billion dollars in sales, a not so shabby 22% profit margin, but FAR FAR from the above 60% claimed in the book. Emanuel never clarifies what profit measure he is using. Moments earlier he mentioned pfizer having roughly 14.7% and mylan having 8.7%. Both of which were "net margins" exactly the same as how I found the 22% stated above. Presumably without clarification he switches to gross margins for Medtronics to make it sound as absurdly high as possible. Unfortunately that does nothing but support my point that he's willing to use half truths to support his point of view.

This is one example of many that I found throughout the book. When you encounter a subject you know well and find misrepresentation being used as a tool, I'm left to wonder about the integrity of the rest of the book.

Would you listen to another book narrated by William Dufris?

Yes he did an excellent job Narrating the book

Disappointment and anger. Our country needs someone to be honest about the healthcare system and educate people fairly.

Explanation of How American Healthcare is Evolving

Excellent explanation of how American healthcare is evolving and why. If only our elected representatives would read this book and stop waisting our time and money on ridiculous arguments about the pros and cons of a plan that does not exist: Obamacare. This country needs affordable care fast. We need a starting point for an intelligent conversation and this could be that point.

The Best Insight on Healthcare and the ACA

As a Healthcare professional re-entering the Healthcare world now with a focus on Health Insurance, I have read months of literature but this Ebook Had the Most valuable well researched (inside) information on Healthcare reform; the goal of the ACA and How The future of our Healthcare Systems & Structure of pay and teaching of future Healthcare Providers will Tremendously Evolve. Thanks! Alisha Brown

Informative -> Biased -> Preaching to the choir.

The author starts off with touching stories that hook the reader to learn more and the direction of the book is pretty easy to follow. Set the foundation on why we need to learn the history, understand what has been done, establish what Obamacare sets out to do, clarify what it actually does, highlight issues before, during and after the launch and concluding with overly optimistic targets, tone.
In terms of the history, i give it that it is a compilation of several time periods of healthcare debates in the country but there is no insight that an afternoon of research can't provide. Well, aren't all books compilation of dispersed ideas? Then, the author sets out to highlight the political climate for Obamacare and the compromises that were made and the elements of the law that was finally passed, the legal and technological problems it had to face which definitely gave me a newfound respect to Obamacare.
I thought I had a solid understanding of healthcare industry owing to my coursework and projects in graduate school examining the healthcare industry, but Obamacare is more than individual mandate, coverage of pre-existing conditions. The compromises that were made couldn't be taught in a classroom since practice differs from theory and politics and policy can't be separated.
But, the author fails to explain why this is the best way to address the problems laid out which you might expect from the creator of the plan. Healthcare costs are increasing but the author doesn't establish the justification for a bloated bureaucracy. And towards the end, the author despite all the compromises that were made claims that Obamacare as the panacea of all healthcare problems but it is far from so. All in all, a compilation of ideas but the nuggets of gold ought to be filtered from propaganda.

This is the best in-depth book I've come across regarding the current transformation of healthcare.

Excellent and succinct review of the Affordable Care Act and USA healthcare system- past, present and the future! Very educative, and highly recommended.

the author is pro ACA

Good information and great history on Healthcare in America. The last chapters were like listening to someone beating a dead horse. The ACA is good and would have been better if the people in charge would have made these hundreds of decisions better. which takes up about a third of the book.

Getting the facts on health reform is important. This book serves as an excellent resource to aid in understanding the landscape of health care delivery in the U. S. and the urgent need for reform.