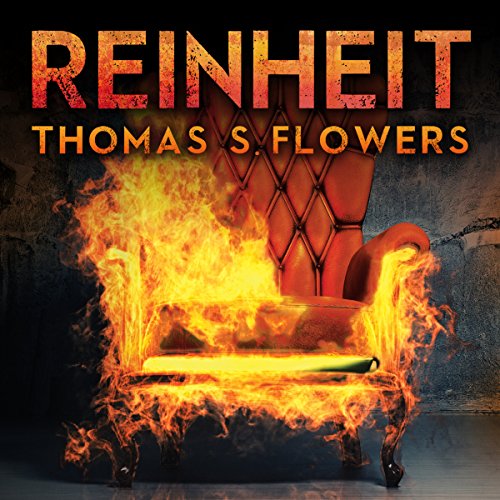 Rebecca Moss never questioned the purchase of the strange, seductive armchair. She wanted to please Frank. But the armchair has a dark purpose. Nazi officer Major Eric Schröder believed fervently in Hitler's vision of purity. Now the chair has passed to Frank, an abusive thug who has his own twisted understanding of patriotism. There are those who want to destroy the armchair, to end its curse. But can the armchair be stopped before it completes its work?

Would you listen to Reinheit again? Why?

I have never listened to an audiobook twice, so no.

What other book might you compare Reinheit to and why?

It's like nothing I have every listened to in the details. The concept is original, with some derivatives of course, but the actual details are very original.

Which character – as performed by Chuck Roberts – was your favorite?

If you could take any character from Reinheit out to dinner, who would it be and why?

Damn, good question. None of them. They are all challenged.

This book gets into some pretty gruesome details ( read Holocaust issues ), as well as moral and ethical dilemmas. It grows on you, and won't let you go. I had some challenges with the story line, but on its merit, it is a fine offering. Credit worthy, but know that it is bloody at times, and not a lot of social redemption opportunities.

I did receive my copy in exchange for this review from the author.

Nazi History + A Spooky Chair = Death for All!

I think it's particularly difficult to create a story that weaves back and forth through time and space. This book takes place partly in Nazi times and partly in modern day USA. I am a huge fan of Thomas S. Flowers' work, it usually deals with some sort of taboo issue in a delicious, horrifying way. I think Nazi's fall into that category pretty well. That said, I think some of the details got lost on me because this story wasn't nearly as clear and concise as some of his other works. I would recommend "Feast" by Flowers if you liked this tale - it's more gruesome but an even better story. I would only recommend this book to friends who love historical horror!

:A really spooky obsessed object book.A chair from the Hallocaust is still making people into murderers today.Chuck Roberst is a perfect narrator for this book.I enjoyed it.I was provided this book by the author, narrator or publisher.

Strong, Powerful voice for the seriously dark nature of this book.

Wasn't expecting so much domestic violence...

Well, I was pretty excited when I saw that this book involved some Nazi lore. It sounded like a good thriller/horror story taking place in the past and connecting it to the present with regards to this evil chair. Well, it ended up being pretty light on the Nazi part and surprisingly heavier on the present day domestic violence and abusive sex cycle going on with the new chair owners, with the main character pretty much just taking it. I get how the author was trying to illustrate the spread of hate and anger (in this case being spread through the chair) and how destructive it is.

If you’ve listened to books by Thomas S. Flowers before, how does this one compare?

I haven't listened to any of Thomas S. Flowers' books before, so I can't really compare it to any of his other work. I would probably consider listening to another one of his novels.

Would you listen to another book narrated by Chuck Roberts?

I haven't listened to any of Chuck Roberts' narrations before, but I wouldn't be against it. The various characters were handled well and I had no problem telling them apart. The Reinheit character was a little annoying to listen to, but thankfully there was very little of his actually character speaking. The narration seemed a little slow compared to most other audiobooks that I listen to, though it was easily corrected by speeding up the narration to x1.25.

Could you see Reinheit being made into a movie or a TV series? Who should the stars be?

The first thing I'll say about this book is that the cover intrigued me: a chair going up in flames made me curious and made me want to start listening right away.

Next let me mention that although I was provided with a copy of this book at no charge by author, narrator or publisher in exchange for an honest review, this is exactly the type of book I'd happily spend money or a book credit on. It's part drama, part history, part supernatural thriller, and it kept me on the edge of my seat.

The book followed the progress of an beautiful and mysterious armchair from World War II Nazi Germany to the present day. There is something "not right" about the chair, and I loved how the chair made people not quite themselves, or rather more of who they really are in the worst ways. So if a man is a sadistic jerk, once he meets the chair, he becomes a murderous psychopath. It seems to highlight people's weakest character traits, which is a great literary spin on the author's part. I haven't read Thomas S.Flowers before, but I will look for more of his work after this for sure.

I won't give too much away because you should enjoy this book as much as possible going into blindly as I did, but for people who have triggers, know this: there is language (which I liked, as it was not gratuitous, but well placed and funny at times), sex (again, totally appropriate for the story), domestic violence (wife beating), and scenes described that occurred (fictionally) in Nazi Germany that could effect you strongly depending on your sensitivity level. I have a great imagination, and some of those scenes are still with me, but since the evil people in the book who committed the most heinous crimes got their comeuppance, I was satisfied in terms of revenge,.

The narrator did an admirable job reading, and although his female voices sounded pretty good during average conversations, he did an incredible job when female characters were under duress of very upset. I was ready to cry when they were crying, so bravo there.

Highly recommended for a blend of supernatural thrilled that's plenty reality-based, and this book provides a good character arc for the female lead. While I was listening, I couldn't wait to get back to it in between listens.

The story consists of two linked plotlines. A wife acquires a mysterious antique chair for her abusive, bigoted husband in present-day America, and a German solder wrestles between conscience and duty under the command of a sadistic officer (whose actions were influenced by the same chair) during WWII in Lithuania. The chair has a way of bringing out the worst in already-evil men.

Fans of dark, gritty stories will be interested in this book. The author spends a LOT of time describing the venal thinking and abusive behaviour of both the husband and the German officer. I can certainly understand the need to illustrate the evil of the two men, but I found that (particularly in the case of the husband), the violent descriptions were excessive. Yes, I know that some description is needed, to help underline how bad the bad guys are. But a substantial part of the story seemed to be almost a marriage manual on how to be an abusive husband and a wife who accepts said abuse. That wasn't the horror story that I was hoping to read - I was hoping to learn more about the mysterious chair, including its earlier history and what happened to it after the main events at the story's climax. I know that war atrocities, domestic abuse, rape, and violent racism are horrible, and that it doesn't take much for people with evil ideas to be spurred on to put those ideas into practice. But one doesn't need to own a possessed chair to commit these heinous acts. I wanted more details about the history and future of the chair, and those details would have earned the story a higher rating (in my opinion).

I'm ambivalent about the narration. I found that the narration was a wee bit slow, so I sped it up a bit during playback. I preferred the author's voice when he wasn't changing his voice during dialogues. (In hindsight, I wonder if the voice he used for the main female character is one of the reasons why I didn't like her character...)

I provided my opinion in exchange for a complementary copy of the audiobook from the author, narrator, or publisher.