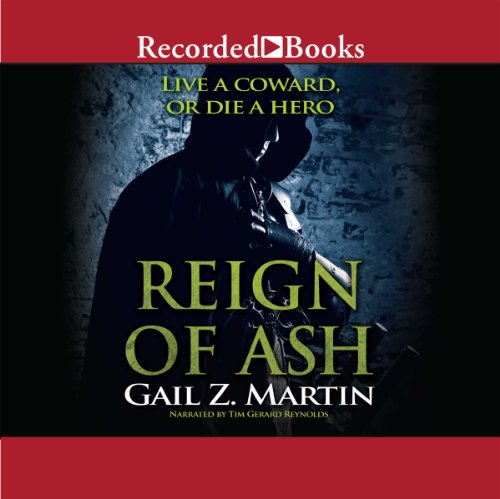 Survival is just the beginning.

Blaine McFadden endured six long years in the brutal Velant prison colony, exiled for murder. War devastated his homeland of Donderath and destroyed the magic on which the Ascendant Kingdoms relied. Now Blaine and a small group of fellow exiles have returned to a lawless wasteland, where unrestrained magic storms wreak havoc and monsters roam free.

Yet, amidst the chaos, rumors persist of a new magic that could restore the kingdoms. But the key lies with a dangerous, ancient ritual and a group of vanished survivors. Now McFadden's only hope is a small, desperate, quickly rallied army. Together they must make one last stand knowing that if they fail, the civilization of the Ascendant Kingdoms dies with them.

What listeners say about Reign of Ash

Not as good as the first.

I actually enjoyed the first book, but this book seemed to just drag on. There were a few too many scenes that were just a little too obvious. Some things happen in the book that I was looking forward to, but they were very anti-climatic. Some of the main characters in this book also take a large step backwards. There is a good amount of whining from one and others make some really unbelievably stupid choices.

I actually wasted a credit on this!

The Headline is all you need. This book/series is terrible! Run away fast and far. The Character's get more exotic but no less weak and whiny. Then we get a romance forced on us. The vampires are still there, although outside of the two main ones they really aren't. The constant travel to supposedly randomly places where they find anything but random things. Everything falling perfectly into place without any struggle. Then forced struggles. Then...Ah. So bad!

Tim Gerald Reynolds is fantastic as always and I do enjoy the characters quite a bit. but the overall story and conflicts that the main characters face all seem inconsequential when most of them they are barely affected by in the long run and even when a character dies they are quickly forgotten about.

A good continuation of the quest to return magic to the world, worth the read.

Where does Reign of Ash rank among all the audiobooks you’ve listened to so far?

Of all the audio books I've listened to I would put this book as a solid second place.

What other book might you compare Reign of Ash to and why?

This book reminds me of a Shannara-esc world, but also a bit of The Hallows.

He has a very nice voice to listen to, though every now and hen character voices get mixed up.

This is the sequel to Ice Forged and I loved it. I cannot wait until the next book comes out!

Will the magic return?

"Will the magic return?" is a question that has a dual meaning for me when it comes to this book as it applies to both the storyline and the series itself. Those who read the first book, Ice Forged, know that the main characters are on a quest to return magic to their homeland and this book follows through on the resolution of that storyline. However, for me the question also applies to the series itself, as the first book started strong but did not maintain my interest level throughout. So I moved on to book two with the hope that the quest would be a successful one and that the magic of this series' strong start would return to my listening experience as well.

Blaine McFadden, the last living Lord of the Blood, along with his band of former convicts must survive threats on many fronts in order to bring the magic back. Torn between the past and the present, Blaine (aka Mick) finds that his two prior lives bring to him both enemies and allies and he must find the right balance between them to be successful. All of the main characters return and a few new ones are introduced, including the Wraith Lord, who I found to be a quite interesting addition to the story. Blaine quest from the first book remains mostly unchanged as he still must collect all the amulets and map pieces required to complete the summoning ritual before his enemies prevent him from doing so.

Unfortunately for me the nature of the quest just feels way too contrived and it is too reminiscent of a video game where you just go around collecting items to advance in the game. Combine that with the all too convenient plot points along the way and for me the magic did not return to the story, despite the pretty cool and interesting encounter with the Wraith Lord.  There is nothing fundamentally wrong with any of the story, but this is a case where the whole is less than the sum of the parts, and in a crowded genre that is just not enough. Luckily the story from the first book wraps up nicely in book two so there is no compelling need to continue on with the series unless you are really into it.

Tim Gerard Reynolds did his usual excellent job but even his storytelling skills were not enough for me to continue with the series beyond this one.

Another well-author and expertly performed addition to the saga. Blaine and company encounter variations to the humans on their trek to recover the obsidian disks and maps believed needed to restore the magic. These were accompanied with more near-death situations to Blaine, the last living lord with the bloodline needed for the restoration to be successful.

There was more interaction between Blaine and his siblings (his brother had survived the war and magic upheaval) but is not pleased to find his brother, who he blames for the family's disgrace. This dissatisfaction will later lead to difficulties as time passes. We also are introduced to new and frightening fantastical creatures who were spawned when the magic became unbridled.

The story progressed interestingly and, at times, involved a sort of a National Treasure type quest with riddles and puzzled needed to be solved with the treat of death if they failed. Near the end of the journey, Blaine meets up with another person who he had previously believed to have perished which hints at causing some additional complications as the saga continues.

A solid addition. So much so, I immediately purchased the next book in the series.

I loved this book it was fantastic with a few twists that left me in awe as I listened I would most definitely tell others to read this series.

A great series that has magic & war. A perfect alternative for Game of thrones. mature not soobing MC. just read it.

I loved this story:) Martin always delivers exceptional fantasy with a grand mix of magic, vampires and The supernarural in a medival would!