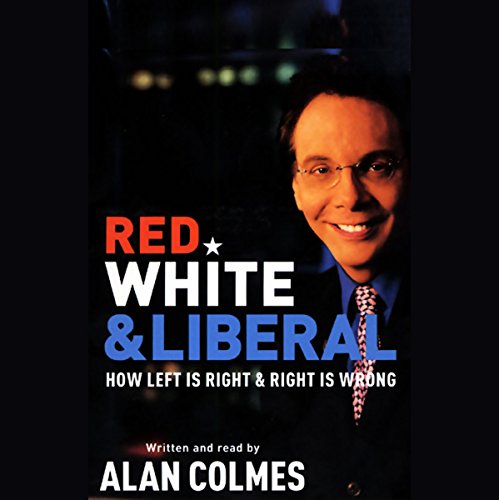 How Left is Right & Right is Wrong
By: Alan Colmes
Narrated by: Alan Colmes
Length: 5 hrs and 16 mins
Categories: Nonfiction, Politics
2.5 out of 5 stars 2.5 (14 ratings)

In Red, White & Liberal, Alan Colmes addresses a fundamental question: In this time of uncertainty, how can we protect our freedom without diminishing our liberties, while burnishing our rightful place as the world's beacon of democracy? Colmes urges Americans to see past the tactics of the vocal Right and to combat the problems that threaten our liberties, including the government's manipulation of the "war on terror" to silence critics and expand its powers to frightening proportions; the lies about the war in Iraq and the situation in Afghanistan; the Right's misguided use of religion to justify hatred and prejudice; and the successful conservative smear campaign against the left that has turned "liberal" into a four-letter word.

Colmes calls America back to its liberal roots. He reminds us that our forefathers spoke out against the status quo and that they believed the ability to express dissent was crucial to keeping a democracy healthy. With thoughtful, provocative arguments, hard facts, and searing humor, Colmes urges us to extend our hands across party lines to find real solutions, protect our shores, and preserve our freedoms.

"Whether you agree or disagree with his point of view, you'll learn a lot along the way." (Bill Clinton)

Asleep at the Wheel

Speaking as a moderate, I can't imagine a worse spokesman for the liberal cause then Alan Colmes. I listened to the MAJORITY of this book before I finally decided I couldn't take anymore.

If you want to learn about the liberals, listen to Al Franken's Lies and the Lying Liars. He's got REAL facts to back up his work.

Colmes is a bit lame in that respect. Sorry Alan. I'd rather hear the Sean Hannity book again.

Colmes may not know how to stand up to hannity on the air, but he does much better in print. Alan ALMOST seems to be the liberal icon FOX (the republican propaganda network) claims he is. A very good read, though for the cost I would suggest Michael Moore or even Molly Irvins.

2 of 9 people found this review helpful

Very entertaining; full of wit and humor. Also, nice audio quality, which should be a given, but often the quality of audio work is almost impossible to listen to.

I was disappointed that there was not more of a coherent outlay of the ?liberal philosophy? if one exists. Instead, the content was primarily accusations of impropriety, misconduct and/or hypocrisy leveled against republicans. For someone as politically savvy as Alan to express shock and outrage at any politician's improprieties reminds me of the joke about the politician that, when confronted, was shocked and appalled that there was gambling and alcohol being served in the casino's bar which he was visiting.

Using anecdotes about republican politicians whose actions are disreputable in order to defend the actions of individual democratic party politicians whose actions are disreputable, the book just reinforced my view that in order to be elected to a federal office, one must be a heartless liar. I can understand and empathize with individuals who strongly dislike any given politician, but I am baffled by anyone that shows strong, sometimes fanatical, support for any politician.

What is the Democratic position on freedom of worship and religion? Do they support protecting my right to worship as I desire. As a Jew, Muslim, Christian, Buddhist, or whatever, do democrats support my rights to prayer? To have Morning Prayer at my school and to take classes that teach the beliefs of my chosen religion with others who share my beliefs? What about taxation? What is their idea of assistance to the poor? Education? Health Care? Etc... but no more room to post.