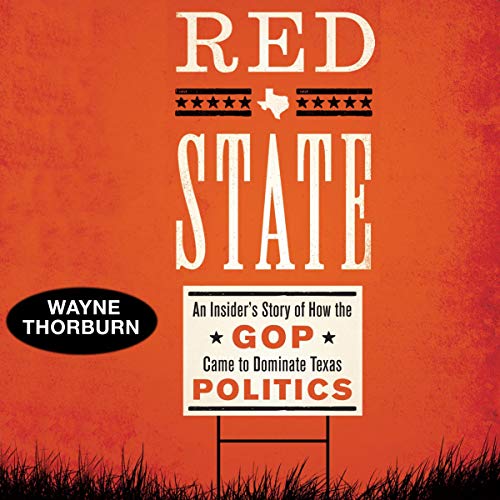 By: Wayne Thorburn
Narrated by: Sam Graham
Try for $0.00

In November 1960, the Democratic party dominated Texas. The newly elected vice president, Lyndon Johnson, was a Texan. Democrats held all 30 statewide elective positions. The state legislature had 181 Democrats and no Republicans or anyone else. Then fast-forward 50 years to November 2010. Texas has not voted for a Democratic president since 1976. Every statewide elective office is held by Republicans. Representing Texas in Washington is a congressional delegation of 25 Republicans and nine Democrats. Republicans control the Texas Senate by a margin of 19 to 12 and the Texas House of Representatives by 101 to 49.

Red State explores why this transformation of Texas politics took place and what these changes imply for the future. As both a political scientist and a Republican party insider, Wayne Thorburn is especially qualified to explain how a solidly one-party Democratic state has become a Republican stronghold. He analyzes a wealth of data to show how changes in the state's demographics - including an influx of new residents, the shift from rural to urban, and the growth of the Mexican-American population - have moved Texas through three stages of party competition, from two-tiered politics, to two-party competition between Democrats and Republicans, and then to the return to one-party dominance, this time by Republicans. His findings reveal that the shift from Democratic to Republican governance has been driven not by any change in Texans' ideological perspective or public policy orientation - even when Texans were voting Democrat, conservatives outnumbered liberals or moderates - but by the Republican party's increasing identification with conservatism since 1960.

“Everyone with an interest in Texas politics...needs to read this book.” (Paul Burka, Senior Executive Editor, Texas Monthly)

What listeners say about Red State