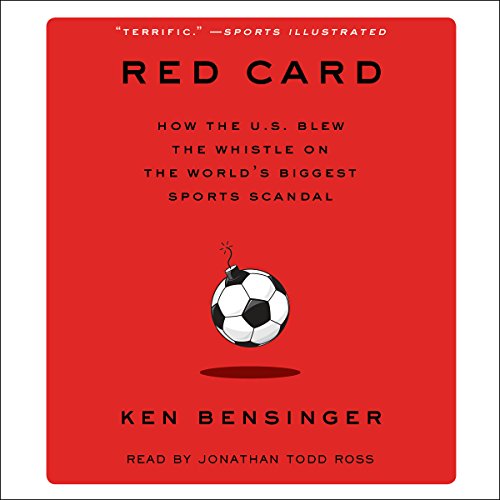 By: Ken Bensinger
Narrated by: Jonathan Todd Ross
Try for $0.00

The definitive, shocking account of the FIFA scandal - the biggest international corruption case of recent years, spearheaded by US investigators, involving dozens of countries, and implicating nearly every aspect of the world’s most popular sport, soccer, including its biggest event, the World Cup.

The FIFA case began small, boosted by an IRS agent’s review of an American soccer official’s tax returns. But that humble investigation eventually led to a huge worldwide corruption scandal that crossed continents and reached the highest levels of the soccer’s world governing body in Switzerland.

In Red Card, Ken Bensinger explores the case, and the personalities behind it, in vivid detail. There’s Chuck Blazer, a high-living soccer dad who ascended to the highest ranks of the sport while creaming millions from its coffers; Jack Warner, a Trinidadian soccer official whose lust for power was matched only by his boundless greed; and the sport’s most powerful man, FIFA president Sepp Blatter, who held on to his position at any cost even as soccer rotted from the inside out.

Remarkably, this corruption existed for decades before American law enforcement officials began to secretly dig, finally revealing that nearly every aspect of the planet’s favorite sport was corrupted by bribes, kickbacks, fraud, and money laundering. Not even the World Cup, the most-watched sporting event in history, was safe from the thick web of corruption, as powerful FIFA officials extracted their bribes at every turn. Arriving just in time for the 2018 World Cup, Red Card goes beyond the headlines to bring the real story to light, accompanying the determined American prosecutors and special agents who uncovered what proved to be not only the biggest scandal in sports history but one of the biggest international corruption cases ever. And it is far from over.

What listeners say about Red Card

For any football fan, aficionado of the game this is a must read/listen. Uncover the facts of these long living rumors about corruption in football from the highest level of power to the lowest characters behind the curtain who made it all possible.

The characters in this are whacky, the narrative is well-paced and filled with plum phrases and there are even some appearances from the Russians and former spy Christopher Steele. It reads at points like a spy novel and at others like a mafia-style cat and mouse game a la The Untouchables. The narrator screws up a couple pronunciations of football clubs, but nothing to lose a star over.

For fans of soccer and for peope interested in stories of criminal abuse of the global financial system, this book has all the elements you could want. I really feel like this is a part II to Franklin Foer’s How Soccer Explains the World. It’s incredible how soccer corruption so closely intertwines with global politics and how the same names of famous (or infamous) politicians keep popping up. Highly recommend!

When listening to this book you will easily be able to hear points in the text that the reader was asked to re-record. The edits sound vastly different and can be distracting. Nonetheless this is a good book detailing the incredibly deep investigation into FIFA corruption.

I couldn't imagine such corruption

this is a great story, just not executed with any excitement. it reads like a text book, and it's a shame. the narrator's voice just goes on and on. I tried. I made it 8 hours, I live for soccer. gave it up.

a book for the Soccer fanatic

a good listen if you are a fan of soccer and follow it at an international level. the book unravels in detail just how corrupt those in the highest ranks of FIFA and other governing bodies had gotten. We will probably never rid international soccer of corruption. where there is money to be made their are people who want to exploit it.

Great story of the fight against corruption

This is a well paced account of the investigation and outcome of the FIFA bribery scandal. It keeps moving and doesn’t get bogged down in minutiae but covers everything in detail. Well performed!

This is a deeply researched crime story that anyone, not just sports fans, will enjoy.