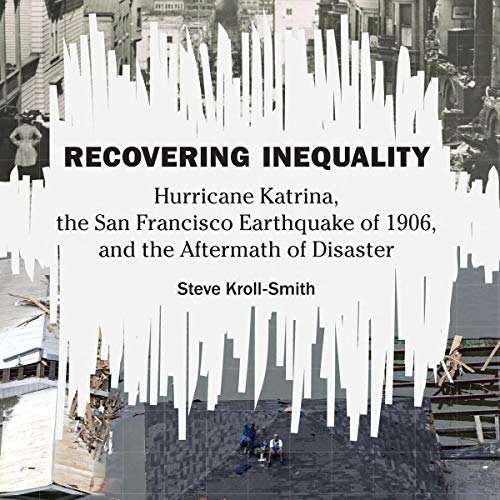 By: Steve Kroll-Smith
Narrated by: Peter Lerman
Try for $0.00

A lethal mix of natural disaster, dangerously flawed construction, and reckless human actions devastated San Francisco in 1906 and New Orleans in 2005. Eighty percent of the built environments of both cities were destroyed in the catastrophes, and the poor, the elderly, and the medically infirm were disproportionately among the thousands who perished. These striking similarities in the impacts of cataclysms separated by a century impelled Steve Kroll-Smith to look for commonalities in how the cities recovered from disaster. In Recovering Inequality, he builds a convincing case that disaster recovery and the reestablishment of social and economic inequality are inseparable.

He demonstrates that disaster and recovery in New Orleans and San Francisco followed a similar pattern. In the immediate aftermath of the flooding and the firestorm, social boundaries were disordered and the communities came together in expressions of unity and support. Kroll-Smith concludes that inexorable market forces ensured that recovery efforts in both cities would reestablish the patterns of inequality that existed before the catastrophes. The major difference he finds between the cities is that, from a market standpoint, New Orleans was expendable, while San Francisco rose from the ashes because it was a hub of commerce.

“A provocative book that will prompt its readers to think seriously.” (Roundup Magazine)

What listeners say about Recovering Inequality

Erudite Publish or Perish book with sound investigation and deductive conclusions. The basic premise is that it is not the geology or meteorology which determined the scope of the death and destruction of each of these cataclysmic events, but the greed and neglect prior to and during the alleged reconstruction efforts which perpetrated the continuation of the inequality among the population.
Peter Lerman performed the narration admirably.
I won the audiobook in a giveaway.

Recovering Inequality: Hurricane Katrina, the San Francisco Earthquake of 1906, and the Aftermath of Disaster, by J. Stephen Kroll-Smith (audio book). Recovering Inequality--the first words of the title (and premise of the book)--caused me to make a mental double-take. That phrase was intriguing enough to push me through its interesting but sometimes confusing blend of history, myth, sociology, philosophy, and more. The uncomfortable and often ignored reality is that in both cities people were living in largely segregated/divided communities—hence the unequal conditions referred to in the title—which led inexorably to intentional efforts to preserve if not increase those inequities. The much-celebrated common bonds that formed during and in the immediate aftermath of both tragedies quickly evaporated, and residents reverted to distasteful social norms.

The foundational comparison of the aftermaths of Hurricane Katrina (and its unmentioned sisters, hurricanes Rita and Wilma) in 2005 and the infamous 1906 San Francisco earthquake appears sound in many respects. In both instances, major urban areas were hit by natural disasters, hundreds of thousands of people were impacted including significant populations of minorities, recovery efforts were variable depending on one’s economic station (with an easy-to-guess correlation to race and socioeconomic level), both areas were militarized in response to unsubstantiated rumors of looting, and political forces drove recovery and reconstruction in inequitable ways. A huge difference between the two that I feel was inadequately explained/addressed was the impact of the country’s emergency management infrastructure in 2005. Yes, FEMA’s and state emergency responses were noted, and critiqued, but given their bureaucratic complexity, more information would have clarified what did and did not happen, and why. It’s one thing to note the uncanny similarities between these two disasters, but a whole other matter explain how things could/should have been different.

The author correctly notes the market forces of American society and its focus on capital as a key driver of how we respond to disaster. This approach has led to favoring those with assets, helping ensure the recovery of people and institutions that, in fact, are best suited for self-rescue. The poor, many of whom have no little or property, but who arguably are personally impacted in ways unimaginable to people of means, receive comparatively little aid and assistance. If a home- or business owner can be made whole by grants and loans, what does it take to make whole a non-owner whose residence is destroyed beneath her feet, dispossessed of all she owns, and possibly even relocated away from family and community ties (as happened to many poor residents of New Orleans)? How do we do both? Or should we? How is it humane or good public policy to emphasize the restoration of capital over the needs of capital-poor individuals and families? The answer is simple: re-instituting the status quo (and historic inequities) is considerably easier than remaking communities in ways that reflect societal ideals rather than historical realities. But is that right or defensible given the government’s outsize role in disaster response?

One stark and compelling set of examples of disparate treatment based on class was the discussion of looting. The author persuasively argues that in both cities rumors and factually inaccurate accounts of looting led to the imposition of martial law, either by decree or de facto. In a blinding statement of the obvious, minority and poor people were regularly labeled as looters, i.e. morally corrupt people stealing from rightful owners. On the other hand, people higher on the social scale, when observed taking things they did not own were described as people “finding” desperately needed necessities or were characterized as good people doing what was needed to do to survive. The immoral poor invariably stole for their own selfish reasons, while the comparatively well off benignly procured food and clothing for selfless reasons. The effect was that looters were sometimes gunned down while the affluent were left alone. Think also of the made-up horror stories of the Louisiana Superdome, where tales of child rape, killing, theft, and general lawlessness were spread far and wide by politicians, news media, social media, and more. Is it surprising that most of the people stranded in the Superdome were poor and minorities?

Kroll-Smith’s book is a thoughtful look at disaster response that implicitly raises important issues and questions. I take it as a challenge to think more about how and why this nation’s response to disaster is what it is, and how we might change it to ensure recoveries that are more equitable to all elements of our society. If a badly constructed building is knocked down by a storm, we should rebuild it only after identifying and correcting its flaws. In fact, we do attempt to do that with physical components of a destroyed cities. Why are we incapable of (or unwilling to) rebuild in ways that meaningfully address social flaws?

I’m quite pleased to have read this book, but I consider it a beginning rather than an end to understanding disaster recovery.
FWIW, I was a nominal participant in disaster recovery efforts for hurricanes Katrina, Rita, and Wilma. My very minor role was to support federal national service programs to promote nonprofit capacity building in Alabama, Mississippi, and Louisiana. Additionally, I was a volunteer call center manager for the American Red Cross, responding to calls from people affected by hurricane Katrina, et al. I also represented my federal agency in assisting with the settling of individuals relocated to Denver after those hurricanes.

Thought provoking and intriguing - worth your time

My first impression of this book is that it is a less political version of Naomi Klein’s “The Shock Doctrine”. The book examines the socioeconomic impacts of a catastrophe on a metropolitan community, and what it takes to help a community manage the impact as well as rebuild. The juxtaposition of 1906 San Francisco and 2005 New Orleans demonstrates that there are very similar human characteristics across 100 years, and the psychological impacts resulting from a catastrophe must be considered in the restoration process. Although I stayed on top of the NOLA news during and after Katrina, rereading in this book how the population was treated and characterized was difficult to hear. All in all these stories seem to follow the “what’s in it for me” guidelines which determine how they are aided back to a new normal.

The narrator has a good voice and speed given the material, however I bumped it up to 2x and found myself stopping the book often to research parts that were discussed.


Now I want to start off by saying that I have lived in Louisiana my entire life (I still do). I lived, experienced and still deal with what Katrina did to my city, my friends, and my family.

This is a book that gets-up-close and teaches us, through the stories of those who lived through Katrina, what the experience of disaster is like. The authors do a good job of moving back and forth between the words of those they interviewed and their own conceptual understanding of what is going on. At the end of the book, there is a convincing essay on the problems embedded in the use of the word "recovery" when talking about disaster.

With two, the truth begins.


Recovering Inequality is a fascinating sociological comparison of two major U.S. City catastrophes which occured almost exactly one century apart: that of the earthquake and subsequent fires which demolished San Francisco in April, 1906, and the drowning of New Orleans in 2005, following the arrival of Hurricane Katrina. Both have strong similarities with some 80% destruction and disproportionate deaths amongst the elderly, inform and poor, the immediate care that survivors offered to each other regardless of status, and the later attempts to acquire prime real estate for redevelopment at the expense of the previous inhabitants. But the ultimate treatment and future of each city was different. This book explores what happened, using data from first hand witnesses, secondary reports and historical and sociological writings to build a very convincing case for the inevitability of the way things occured both before, during and after both disasters given the socio economic basis of 'interpreting the world in dollars'.

The narration by Peter Lerman could have been smoother but he has a pleasantly authoritative voice, with good intonation and presented the text clearly, without hesitation or interuption. It marked the writing as a nonfictional work rather than imaginative fiction.
My thanks to the rights holder of Recovering Inequality for freely gifting me a complimentary copy, at my request, via Audiobook Boom. To say that I 'enjoyed' the book would be facile, but it was an informative and well presented argument using well documented reports and was very readable. I would recommend it as essential reading to everyone with the slightest interest in history, disaster management, society, or the future of the way of life to come.